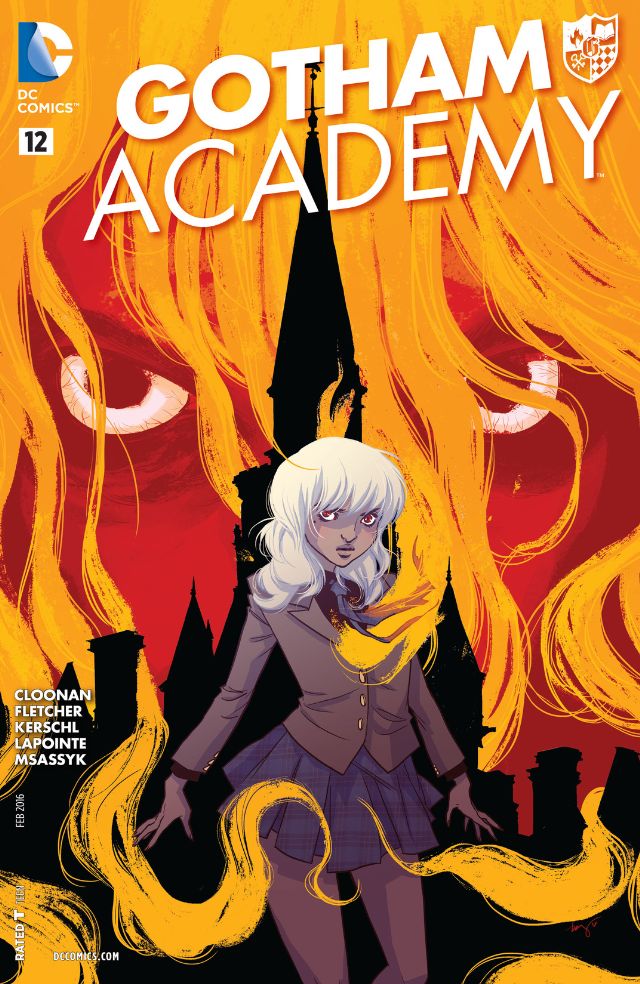 At last, Olive comes face-to-face with Calamity and faces the truth about her mother. But will she walk away with her friends, or succumb to the fires of Arkham Asylum?

Man. This book is deceptively fun.

Make no mistake, Gotham Academy is fun. And adventurous. And hilarious. Every other word the writers pull out of Maps’ mouth is worth a snort or, at the least, an enormous smile. You can almost hear the Scooby-Doo-like pitter-patter of the Pizza Club kids’ feet as they head into and out of danger. And like an old Scooby-Doo adventure, the reveal in this issue was there all the time, and not nearly the supernatural threat Olive and company believed it to be.

Except when you really think about it.

Cloonan and Fletcher have developed Olive into much more than just another student, as the full weight of her background comes to bear in this issue. For all the funny retorts and honest-to-goodness save the day antics, the events of this issue are damn scary when you stop to think about what’s happening under the surface. The tension the writers have developed between pointedly fun and starkly eerie — perhaps even, dare I say it, a dark underbelly — really seals this arc the way it began: with a lot of questions and on a somber note. And while I’ve no doubt the coming months will be bringing lightness and frivolity back to the kids and their adventures, I won’t be able to help but have the final pages of #12 in the back of my mind, scratching from below the surface.

Karl Kerschl brings his usual beautifully expressive renderings of the kids back to this issue, although with a focus on much less dynamism than we’ve seen in the past. If anything, that seems to be a deliberate choice — a slowing down of the narrative to make those last few page turns drawn out and deliberate. It’s a great example of how you render the macabre. Not with shock and awe, but in slow, detailed, deliberate steps that gives the reader an opportunity to let the scene be unsettling on its own merits.

Contributing mightily to this effort of winding down is Lapointe and Msassyk’s color work, as we graduate from darkness to warm fall colors, almost an inversion of the natural seasons. It’s not the full color of spring that we’re left with as the story takes its next turn, but a recognition that something has changed, and not necessarily for the better.

There are a million other little moments that strike me about Gotham Academy #12, from Colton’s ability to be the one to physically save Kyle to Pomeline’s teen confusion about her own motives and reactions to Olive. But at its heart, this issue was about sadness underneath the surface, danger you can’t see coming, and what it means to lose yourself to something that’s already taken its toll on many others before you. It’s a lonely, dark feeling underneath the camaraderie that this creative team is delivering, and it’s made this book the rich experience for all ages that it is.