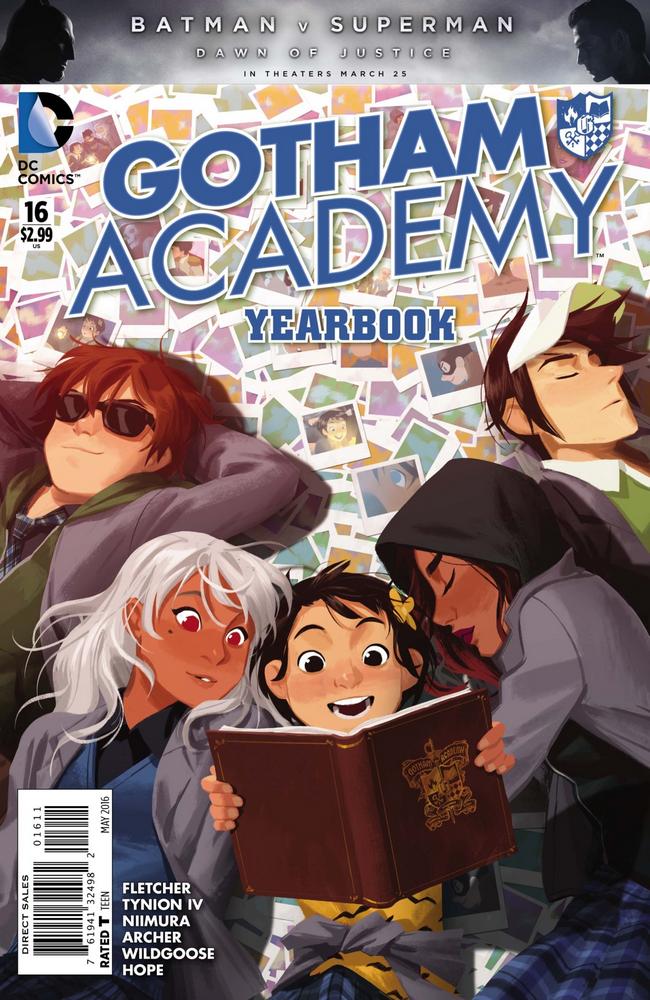 “Yearbook” continues as Maps takes center stage, leading to a clandestine visit from a boy wonder, a stakeout to meet the Dark Knight, and an interesting discovery that puts Pizza Club on high alert!

Every so often, there’s a new character introduced that quickly becomes so much more than anyone could have imagined, almost as if they take on a life of their own. It’s hard sometimes to recognize, as new characters in Big Two comics tend to get developed and stick with their creators, to their detriment at times.

Kate Kane is a good example of a character so identified with her original creators that it seems very few other writers can really “get” her. We see it all the time, unfortunately, and most often with women characters — once their featured series is over, as with Renee Montoya, Kate Spencer, and Cameron Chase, they rarely get picked out of the toybox by other writers or artists.

That’s why Yearbook, the latest storyline in Gotham Academy, feels so right to me. Admittedly, this series of vignettes done by non-series regular creators (and in fact, some creators from the indie world who haven’t ever had their name on a DC Comic) comes early for the book. Gotham Academy has only had a year’s worth of stories before launching this experiment — barely time to get on solid ground from some perspectives.

But all the more reason, I think, to embrace what has become a beautiful and fascinating look at how much love it seems Brenden Fletcher, Becky Cloonan, and Karl Kerschl have inspired for these young girls and boys of Pizza Club. Because it’s not just fans that have fallen head-over-heels for Maps and her crew. It’s other writers and artists, too. And it shows.

And the pencil work from artist Christian Wildgoose delivers on an energy that seems completely inexhaustible, until it isn’t. In that moment where Maps drifts away, just before the black boots set down on the rooftop, you can feel the energy slipping out of the panels. And then whipping back to full force by the end as Maps awakens. Between Wildgoose’s range on Maps’ expressions and Serge Lapointe’s gorgeous nighttime color palette, we get a complete character study of our Robin-in-waiting that is a true delight, harkening back to Tynion’s very successful pairing with Noelle Stevenson on Sensation Comics.

Ken Niimura likewise captures the relationship Maps enjoys with her fellow Pizza Club members in the second piece, which he writes, illustrates, and colors solo. In a much looser, but even more heartfelt examination, Niimura gives us 14 pages of pure innocence and endearment as Maps rallies her friends for a Sunday adventure.

The twist, of course, is clear pretty early on, but that’s not the real core of the story. No, the heart of what is happening here feels like it’s hitting on two different levels: at my adult adoration for the purity of friendship at that age, and on a child’s base desire for grand adventure. Niimura’s open, storybook style at once feels like the best indie graphic novel you found on a weekend comic con trip AND an illustrated children’s book you may have bought your newborn niece or nephew. It’s light, airy, and yet pulled a whole lot of emotion out of me in very short order.

Sure, “Yearbook” is a break from the mainline story we’ve come to expect from Gotham Academy, but we’re getting something early on with these characters that some younger characters never get: investment, not from us, but from other creators. Their excitement to write Maps and her friends is no less than our excitement over the news of another huge opportunity for Gotham Academy: its upcoming crossover with BOOM! Studio’s Lumberjanes. And judging by what I witnessed yesterday in online excitement, that’s saying a lot.

So, sit back, take in a yarn or two, revel in the gorgeousness of Niimura’s line or the cleverness of Tynion’s dialogue, and thank the stars we get to watch a new generation of characters — and creators — expand right before our eyes.