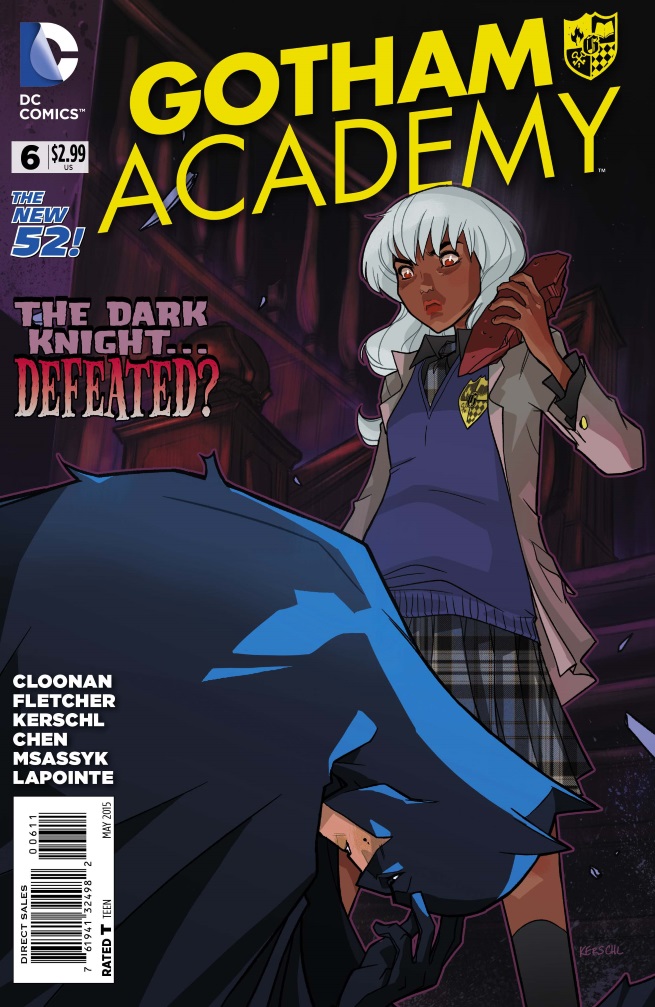 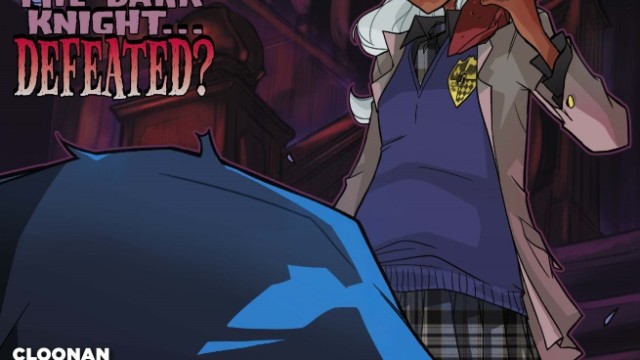 A split-duty of art creates a transporting effect for the concluding issue of Gotham Academy‘s first arc.

The main story continues to be created by Karl Kerschl’s manga influenced style. Do not let that last descriptor throw you off if you are not a fan of manga. It is merely a touch, or hallmark, slightly seen on the shapes of student’s facial features. When combined with a few detailed aspects of the Kerschl’s superhero influences it helps to create a full animated series effect on the page.

This feeling is made even stronger by the heavily highlighted, shadowed and vivid colors of M.Sassy.K and Serge Lapointe. At any second you feel like characters such as Olive, Maps, Croc, Batman, really any of them will be flying off the page and start completing their story on the television screen.

As soon as the action begins panels immediately begin to trick the eye as if they are overlaying each other. In actuality, there is a back and forth between black and white borders and non-standard shapes that creates this illusion. This provides fast pacing and a highly dynamic opening sequence.

The second artist on the issue is Mingjue Helen Chen. Chen’s art is used as a purposeful break to signify flashbacks, other characters telling stories, as well as a transition in a final epilogue to the main story. Chen’s style looks like many of the oil painted tools used in digital art. Chen’s colors cause most of those pages to take on a three dimensional feeling, since there is no traditional black line inking style around the figures. Except for the epilogue, the paneling becomes very static, with straight rectangles across the page. This provides a softness to the memories and stories told by the characters. The art is what sells the story in Gotham Academy.

You have a group of friends who have been trying to solve the same mystery since issue #1. Each chapter has revealed just a little more each time. Starting off with an action sequence provides for high excitement, but also allows the reader to gradually fold back into the mysteries that have been presented since the beginning.

Fletcher and Cloonan are very exacting with their dialogue to make sure that not everything is revealed. Just enough plot points are hit to make some facts clear. Reveals such as Olive’s aversion to bats, how she came to be under the watchful eye of Bruce Wayne and her connection to Croc are given more clarification. However, do not expect all the puzzle to be solved and a new one to be brought out. The team is still working with the mysteries they initially presented, just making room for new ones to come along next time.

A soundtrack of John Hughes movies could be stuck in your head by the time credits page pops up toward the end of the issue. The story follows a natural progression that helps the core group of friends of Olive, Pomeline, Maps, Colton and Kyle, to come together without feeling forced. For those who have been following along, it leaves a warm fuzzy feeling once completed.

The character progression between Pomeline and Olive also feels complete. They have traveled the road from friends to unwanted allies to frienemies. This relationship is clear with their dialogue, after all the action settles down. Also there is pizza. Who doesn’t like pizza?

There are a few story and art points that keep the issue from being a complete, single package. First is a visual problem with some of the letters to characters: one from Olive’s roommate Lucy to her, then an inscription in a book to Bruce Wayne. In digital format at least, both are very hard to read. It makes the story just a little bit awkward when time is taken trying to decipher what was written.

With the central story setting up a Breakfast Club-styled group it can also be frustrating that one of the characters that shows up throughout the whole issue never has his name mentioned in this issue. The character given great lines, but remains unidentified to new readers is Colton. While this is not a problem for those who have picked up on Colton’s quirks, attitude and hijinx in previous issues, it can be an annoyance to someone who decides to try the series out now.

Most of the story is relatively understandable without reading previous issues. However, there is a depth that can be lost if you have not read at least the two previous installments. That’s because this issue picks right up from last month’s cliffhanger. New readers will not realize that before the appearance of Batman, the Gotham Academy students and Croc were having a nice relaxing time together sitting around chatting.

The visually stunning, depth filled characters and highly detailed backgrounds created by the combination of Kershcl’s pencils and M.Sassy.K and Lapointe’s colors immediately put you in the middle of the danger. The character progression and friendships help to provide a rounded arc conclusion. The epilogue provides understanding to Batman’s involvement as well as open a door for the next issue.

Our core group of protagonists are finally one, which allows for future mysteries as well as some excellent pizza parties.