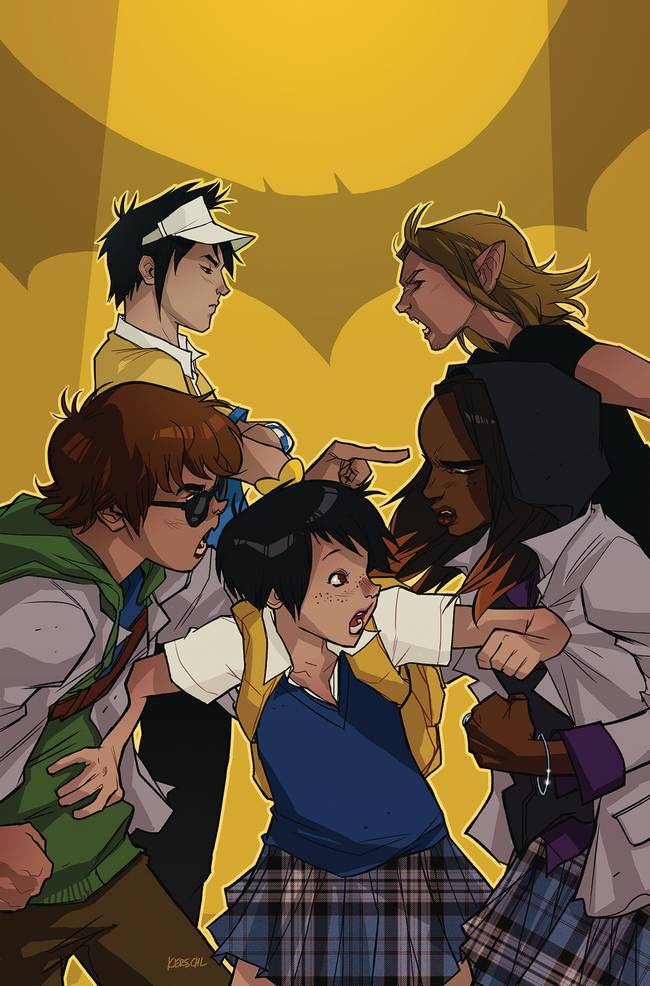 If the cute, but not always story-driving, vignettes of the Yearbook series have kept you away from Gotham Academy, this is the issue to climb back aboard. This annual serves as a great standalone “Pizza Club” adventure with plenty of hints, giggles, supernatural mystery and monster hunting. There is also one uncomfortable thread throughout, thanks to the bully tactics of Pomeline, that is truthful to teens, yet uncomfortable and dangerous in example.

Olive fans will be disappointed. While the issue begins and ends with her, she’s missing in action for most of this issue with a mysterious illness. The illness is the catalyst for much of the action by others. Along with many around the Gotham Academy campus falling ill, there is a strange fire in the bell tower, and a figure jumping across roofs. These two events create a Pomeline vs Colton dynamic that drives the conflict. Kyle and Tristan are forced to “choose sides”. This leads the Pizza Club on a series of separate adventures and problem solving. Maps is stuck in the middle, and the conclusion, while slightly predictable, is fun and dynamic.

It’s where the initial team split that occurs that Pomeline’s behavior is problematic. Without giving anything away from this or previous issues, she teases Colton, in front of everyone, with information that is none of her business to reveal. It seems like an overt choice for Cloonan and Fletcher. While rather typical of teen behavior, especially for Pomeline, it’s very uncomfortable to read. It’s my personal hope, this discomfort will serve a function in the new Second Semester series (Gotham Academy’s version of Rebirth or a season 2.) Hopefully, Pomeline’s “threat,” can be addressed in later issues. It would be nice to see a big two comic, especially one embraced so much by tweens and teens, talk about why such things are not acceptable or could hurt someone.

Even with this rather jarring development, the intention of a fun spirit of this book is clear. Cloonan and Fletcher make their signature references to classic Gothic elements, including Edgar Allan Poe’s The Tell-Tale Heart. It’s these little touches that bring hope and delight to long time fans of the series.

The artistic story trade-offs between each art team is purposeful, as always. It’s only in times of scene changes that the artist or art team is switched up. The beginning and conclusion share color styles creating nice bookends. Msassyk and Adam Archer both have styles that blend well together in this story. Dialynas and Wildgoose have had their own stories throughout the Yearbook series. This makes their art easily recognizable, to long time readers.  Each “team” in the story is setting out to prove their theory. This allows each artist and color style to set themselves apart without standing apart too much. Once the “Pizza Gang” finds themselves joined, that location takes over dominance in both color and pencil work. For those who do not link multiple teams on a book, then this issue might not be for you. However, the division of work has purposeful choice made that keeps it from being completely disjointed or shocking. This is a division of work that has been used in many DC books, along this vein. You’ll love it or hate it, depending on your reading style.

This is the last issue before Second Semester takes over. There are just enough stories that have been planted to create intrigue for what comes next. Colton is due for a major story arc, with the threads, the last half a year or so, that have been planted. Pomeline needs her own dose of reality for just how cruel her behavior can be to others. Maps remains fun-loving. Kyle is still a background character who exists only to obsess about Olive. It’s the desire to see these character continue to grow and expand, more than this story alone, that will bring fans back for the new number one issue.