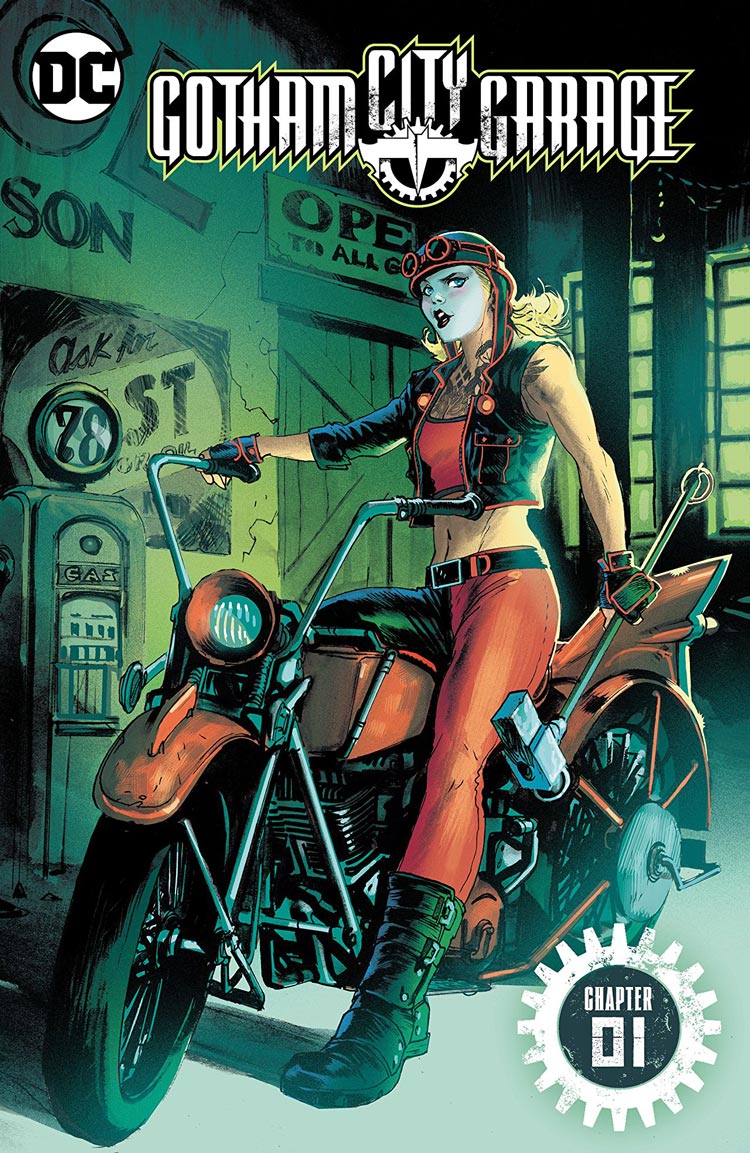 Earth has nearly dried out and as far as we know there is only one bastion left. Kara does her best to help people survive, though her job is complicated by some rather strict views on who or what people can be. After being put on the run, she may feel lost, but there are others who quickly let her know she’s found.

Gotham City Garage works as a short and relatively insulated comic. In the span of ten pages, we get to see a growing mythos and the characters who drive it. The fact that we are working with an alternate universe gives the creative team a lot of room to grow the characters as they wish. DC seems to value these sorts of stories, and with enough support I think we will end up with a true gem. We already have some indications of that direction.

Collin Kelly and Jackson Lanzing introduce us to Kara as a focal point of the story. To be honest, anyone familiar with Kryptonian physiology will recognize where the comic is headed. Kara’s pivotal jump outside the dome is a catalyst for things to come, particularly when some familiar faces pop up in the last page.

Kelly and Lanzing take a common dystopian theme of the margins of human civilization on the brink of extinction and put DC anchors into Gotham City Garage, giving just enough to keep readers interested.

Brian Ching represents a dystopian DC world though angular characters and physical environments. A lot of visual elements are pointed, lending to a feeling of sterility. Ching also uses space to represent the thinning of humanity’s future.

In this world, there aren’t that many people left, at least based on how the story is presented, and using straight lines and more simple geometric figures gives room for a visual match to the dire straits of humanity expressed in the opening pages.

The Garden as the last bastion of humanity is shown through nigh bleak and dismal colors at the hands of Kelly Fitzpatrick. Life doesn’t seem that rosy, and neither do the pallets used to flesh out the story. Despite the sullen and muted tones in many of the pages, Fitzpatrick capitalizes on warmth to represent the last word we see in the issue: hope.

The legend of Wonder Woman and Kara’s first flight are both surrounded by the comforting yellows and oranges of a sunrise, demonstrating an artistic parallel for optimism.

We have a small taste of what’s to come in Gotham City Garage’s first chapter. Like many stories from alternate universes, there is enough distinction to tell this comic apart while also connecting to parts of a larger DC mythos that most can recognize. With the appearance of some choice characters at the end, this series will very likely turn into one which folks will want to collect.

Given that this is a short introduction to a new world, there is more information we need to firmly jump in. Yet, I can say that I have confidence that this story is one that has a lot of potential and will be a nice departure from common cape comics while also holding true to their core mission all the same.