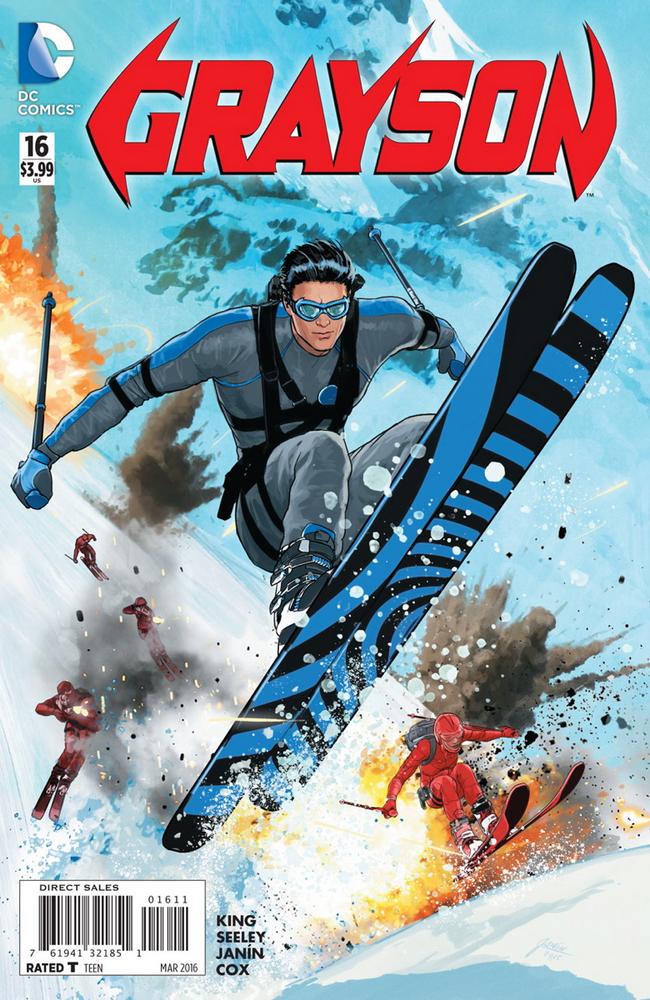 Agent 37 and Agent 1 start to pick apart the organization that separates their numbers, as the history of Spyral begins to catch up with it. From all points of the globe, Grayson and Tiger King are kicking ass and checking off agents, wittling down Helena’s resources. With her back to the wall, she’s going to have to stop pulling punches. And it may be more than the two agents can face on their own.

I’m not going to mince words. This is the most James Bondy issue of Grayson ever written. Full stop.

And that is only the beginning of what makes issue #16 one of the most delightfully decadent of the series to date. King and Seeley don’t go deep into the minutiae of spycraft here, and that’s part of why it feels so much like a Bond film. The emphasis is on flash, fun, the glamour of being an international spy taking down other international spies. And some huge laugh-out-loud moments. And near naked hotness from both men.

Why are we even talking about this book anymore? We should all just be agreeing to read it over and over until the pages get worn from handling.

The montage format Janin provides for a significant portion of the book is both visually enticing and cinematic in its way, giving us a sense of passage of time while making Grayson and the Tiger King’s movements through it feel fluid and wholly connected. It’s as if their backgrounds are fading from scene to scene, and they never stop talking. Well, Dick never stops talking. Or singing.

DID I MENTION THERE’S SINGING?

It’s a very clever way to compress a lot of action into a very short amount of space, and allows the reader to focus on the most important aspect of the comic: the banter. To date, we’ve had whole issues with Agents 37 and 1 working together, but this is truly the first time I can see them as true, nestled in partners. It’s magic to have that on the page, and even more wonderful when there’s (maybe) loving antagonism at play. (It also doesn’t hurt that everyone is so goddamn gorgeous under Janin’s pencils and inks.)

It’s part of what makes this series so special (besides the breakdown of masculine identity and flip of the camera gaze — which is still ever so impressive), that pure personality driving Dick Grayson’s portrayal in every scene and on every page. He is charm incarnate, and there are few characters in the DCU as endearing. King and Seeley have amped that aspect of Dick’s character up to 11. He’s not just a great butt, friends. He’s a great butt that acknowledges cultural misogyny and respects you for who you are. So dreamy.