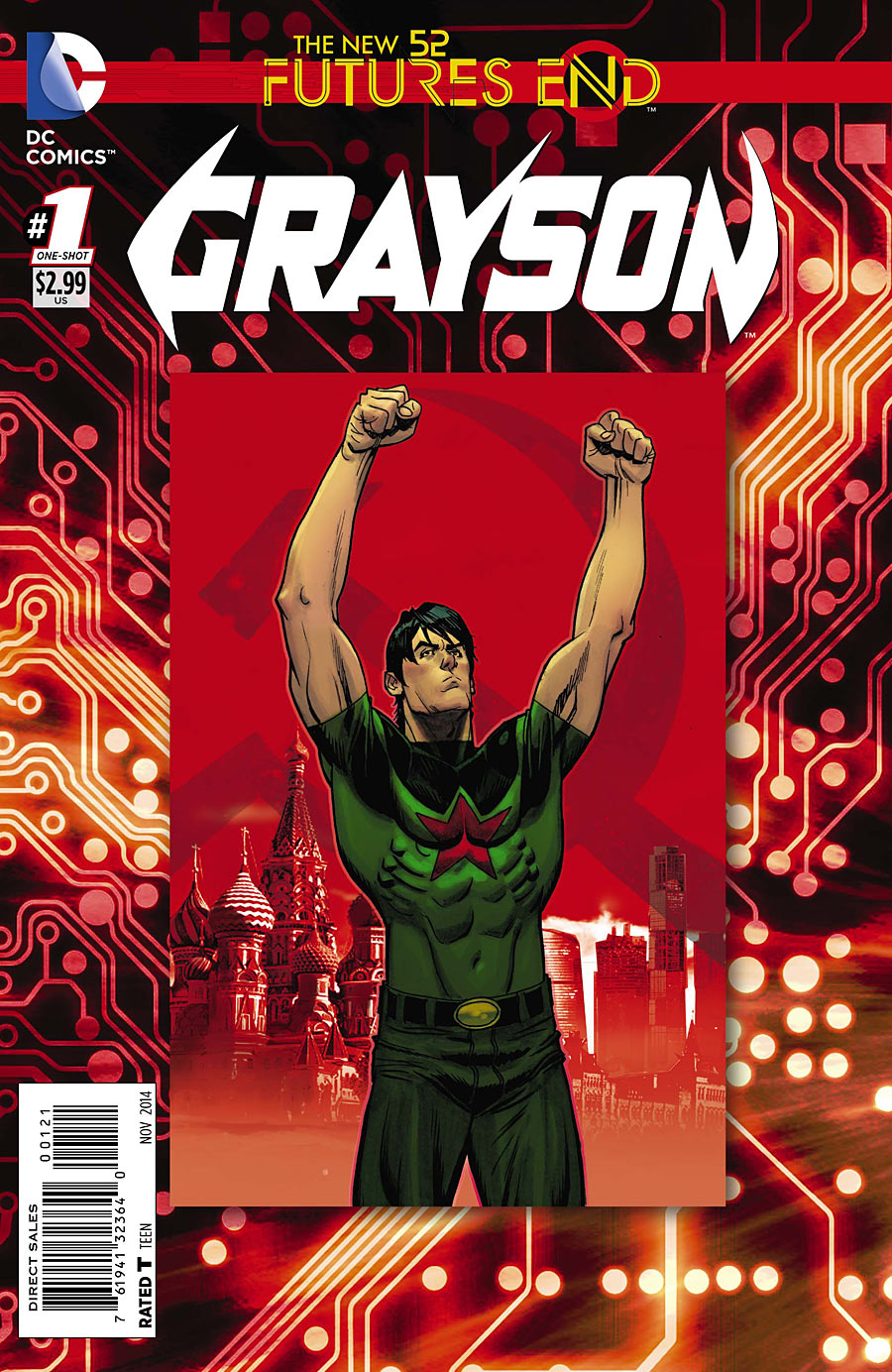 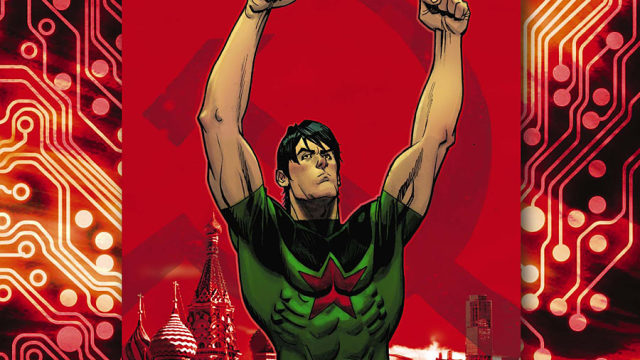 The writers behind the ongoing Grayson series interrupt their regularly scheduled programming to catch up with Dick and Helena five years from now, as the Futures End event continues throughout the DC Universe. The creative team could have easily phoned in a simple one and done issue, but King, Seeley, and Mooney (pinch hitting on pencils for series regular Mikel Janin) decided to go all out. The end result is a must read issue for fans of Dick Grayson that takes an inventive approach to storytelling, and has emerged as an early frontfronner for the best issue that the September DC event has to offer.

Grayson: Futures End #1 had a lot going against it. The biggest problem being that the ongoing title has only been around a few months. The creative team is still trying to find its footing, as readers adjust to one of the most iconic characters in comics having a new status quo. Then King & Seeley decide to take what is already a gimmick issue, and throw a separate storytelling gimmick on top of it all. This could have been a disaster in lesser hands, but King & Seeley expertly maneuver their way around the problems. Yes, Grayson and the Spyral status quo may only be a few months old, but Dick Grayson the character has been around over seven decades. Falling back on this fact to tell an engaging story that cuts to the core of Dick Grayson was a brilliant move. This also allowed the inclusion of the reverse storytelling to go from “gimmick” to well executed “technique.” Even more so than the first two issues of Grayson, King and Seeley prove here that Dick is in good hands with them at the helm.

The issue starts off five years from now as Dick makes a decision regarding one of Batman’s old foes that will change his life forever. From there the action moves backwards through both time and the life of Dick Grayson. When it’s all said and done the issue covers about ten years of Dick’s life. We see how his relationship with Helena has grown over the course of five years, the two out on missions, a discussion with Barbara Gordon about why they would never work, Dick as Nightwing, Dick as Robin, and even a glimpse of where it all started at Haley’s Circus. As you move through the issue the structure could prove to be a little jarring. You have punch lines being delivered before the jokes, and promises being kept that you don’t see made until later in the issue. It is different, but when the last page is turned it will all make sense. It is a testament to the creative team that it worked as well as it did when it could have easily been a disaster. There is a very nice symmetry to the entire issue on both a micro and macro level, and it will pull on the heart strings of Dick fans all over the world. Seeing Dick throughout the years added a nice touch if depth to the issue, and to see a glimpse of Dick’s time as Robin was fun. These have been few and far between in the New 52, and I can only hope this era will be explored more at some point.

While the focus on the entire career of Dick Grayson gave the issue the room to breathe and operate beyond the Futures End timeline, it also allowed for some character issues that dmay bother long time fans. These issues aren’t universal, and will come down to how one interprets Dick Grayson as a character. First, there seems to be a contradiction to the first two issues in the series when it comes to Dick killing. Dick kills several people in the issue, including an entire truck of troops using what sounds like the same stuff that killed his parents years ago. There’s also a scene where Dick strangles someone to death. It can be argued, and I’d buy it, that these events were meant to show how the character has changed throughout the years. That would be okay, but it seems like such a jarring change to the character that doesn’t quite fit in with what we see of his personality otherwise. The other problem is that the conversation between Dick and Barbara provides an argument on the type of woman Dick is looking to be with. This is setup to show retroactively why Dick is with Helena and not Barbara, and while it’s well articulated the reasoning goes against how many readers view Dick. The information we are provided with fit in seamlessly with the story, and I hope that some of these choices are explored in the main series, as Dick moves closer and closer to the character he is at the beginning of the issue. I am more or less nitpicking what is ultimately a stellar issue that does more right than wrong with the legacy of Dick Grayson.

Stephen Mooney handles the pencils for this issue, with Jeromy Cox on colors. The books looks good. The art isn’t going to blow anybody away, but it isn’t going to turn anybody off either. The first and last pages are probably the highlight of the issue from an artistic standpoint, but there is still a lot to like otherwise. Some strong aspects include the dichotomy of Dick and Helena’s faces as they find themselves in a precarious situation, and the cradling of a child in the middle of some wreckage. Mooney shows off some range as he is forced to tackle different eras of Dick’s career, and he does a very nice job with the layouts. The art is at its strongest when closed in tight with a focus on facial expressions, as there are some slight issues with how Mooney handles the characters’ bodies. While the art stands on its own just fine, it is really hard not to wish that the great Mikel Janin had managed to squeeze this book onto the schedule. After seeing what he has been able to do in the first two issues of Grayson it would be crazy not to wonder how he would have handled some of the iconic moments featured in this issue. That may be a little unfair to Mooney, but it’s something that can’t be helped. It also points out one of the biggest pitfalls of the DC September events, as very few regular artists from the ongoings are able to participate. While understandable, comparisons will inevitably happen.

Some readers may find issue with some of the characterization choices. Other readers won’t be able to help but wonder “What if?” when it comes to the good, but not spectacular, art. Yet overall, King, Seeley, and Mooney have created a great comic book. There won’t be another issue this month that takes the narrative approach that this one does, and there won’t be one structured the way this one is. The execution of these storytelling techniques are solid, and help elevate what easily could have have been an trainwreck of an issue into something great. At the end of September when readers discuss the best that the Futures End event had to offer, Grayson: Futures End #1 will be in the conversation