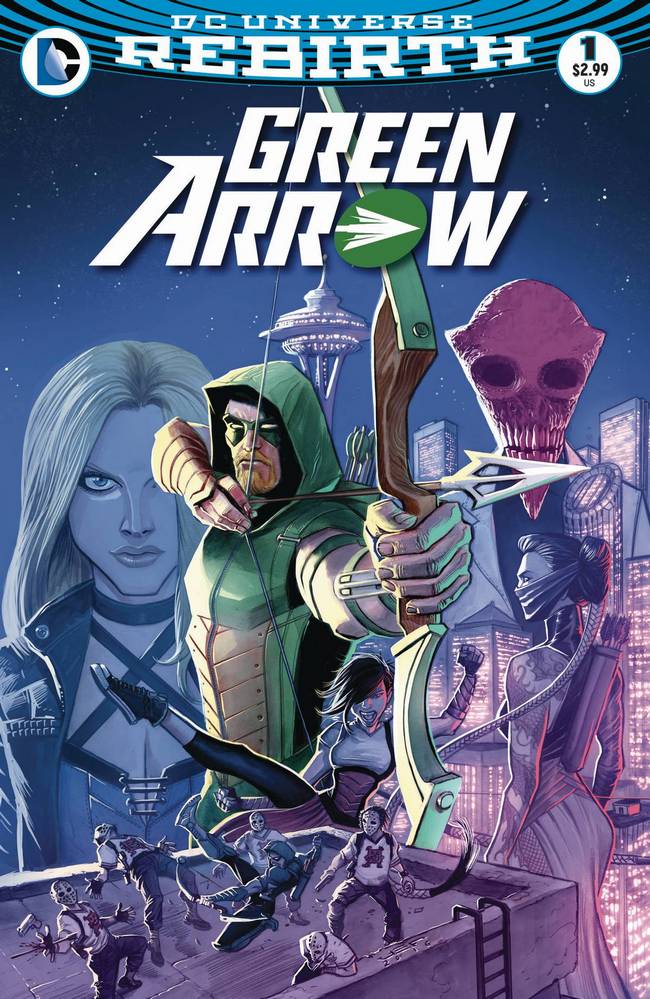 Ollie and Dinah continue to clean up Seattle’s dark underbelly as Green Arrow ramps up.

Percy and Schmidt build on the strong Rebirth issue with a #1 that sets the board nicely and becomes something entirely different at the end of the issue. It’s a good starting base for someone looking to start reading Green Arrow comics, and the hopefulness and lightness in the tone of the issue that seems to be a part of this Rebirth movement.

Overall, I liked the issue. I like the lighter aspects of the tone, even if at points everything is a bit too “hunky dory”. Percy and Schmidt juxtapose that nicely with one hell of a crazy ending, and it is apparent that Ollie needs Dinah to work. She brings out the best aspects of his character and tempers the Tony Stark aspects of him, leading to a Green Arrow that is the best version of himself. While their relationship goes a direction I’m not entirely sure I agree with at this point, the two of them are like fire when interacting on the page. There’s chemistry there, and both Percy and Schmidt make that chemistry work.

Beyond the chemistry, the last part of the issue is where Percy and Schmidt kick this story into high gear. I’ll openly admit I didn’t see it coming and the last few pages of this comic floored me. I feel like they lulled me into some complacency with some things-are-going-too-easy moments and then crushed me with the finale. #2 can’t come quick enough, after reading those final pages, and the storytelling these two execute at the end gives me high hopes for the series going forward.

Otto Schmidt’s artwork is solid throughout the issue, and he draws Ollie and Dinah kicking ass very well. I liked the visual tone he set for the story, as there’s the right balance of darkness and light to keep the comic from floundering in depression and shadows all the time. I enjoyed Lemire & Sorrentino’s issues of Green Arrow from the last volume, but there’s a different dynamic here that I enjoy. While their storytelling was more visceral, there’s hope in here, both visually and in the dialogue, that was missing before.

Green Arrow #1 was a great read. There are aspects of Ollie and Dinah’s relationship that will certainly need more examining, but I like where this comic is headed. The final pages hit like a hammer, and I’m ready for Green Arrow #2.