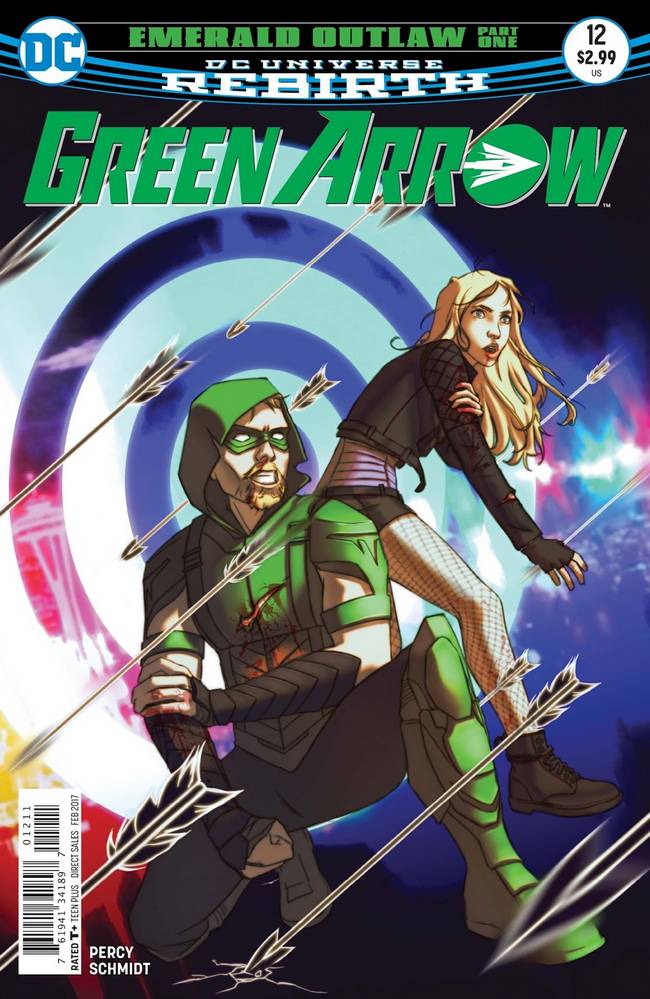 When I say political, I mean it. Percy brings a Trump analogue, police corruption and the questions that surround vigilante justice into play, but I will say he tempers it well with the character moments. The political aspects of the issue feel organic rather than forced, nor do they feel like they’ve come out of the blue. Percy has been building to this situation for quite awhile now, and it fits very nicely with where Green Arrow has been going. This comic, in all it’s Bond-ish superhero amped up madness, is very reflective of the current political climate and I applaud how Percy has built this series into a vehicle where these topics do not feel foreign.

Politics aside, the interactions between the primary characters in this issue are fantastic. Arrow and Canary are probably my favourite couple in comics (Arthur and Mera are still tops when written well) and I find their banter delightful. Diggle’s “third wheel” status fits the dynamic perfectly and their new wooden hideaway was the setting for some great scenes in this issue. Ollie needs his friends to be the awesome character he can be, and Percy gets that. He’s built a good “family” dynamic between these characters and they are very entertaining on every page.

Otto Schmidt’s artwork is sharp throughout the issue, though I will admit he toes the line of objectification for me where Canary is concerned. She’s a strong woman who is a powerhouse, but as we all know in comics a powerhouse can become a pinup depending on the intent of the artist. I didn’t feel he fully crossed that line in this issue, but this story only works if Canary is Ollie’s better and not a cheesecake side character with a big voice. Canary near-issues aside, Schmidt’s layouts are fantastic. The flow of story across the page is engaging and enthralling, and I love how kinetic his work can be. His colours are as strong as his pencils and they energetically leap from the page.

Green Arrow #12 is another rock solid installment and a great start to the new arc. It has the right blend of super-heroics, politics, action, character moments and fun to be the total package and one of DC’s strongest books. If you haven’t been reading Green Arrow, do yourself a favour and catch up…or at least get on board with issue #12.