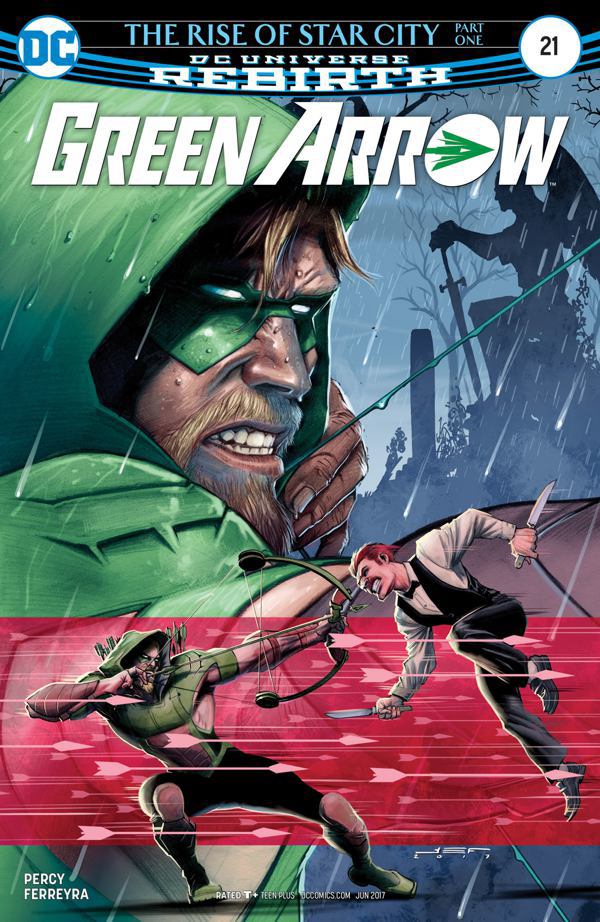 Green Arrow’s reputation has been destroyed. Oliver Queen has been ruined. Seattle…you’re next.

Green Arrow #21 kicks off a story that has seemingly been building since the first page of Percy, Ferreyra, Schmidt et al’s run. Oliver continues to find secrets hiding behind other secrets the deeper he gets into his family’s past, and the corrupt politics of Seattle begin what seems to be the final phase of the destruction of the City.

The escalation of storyline to this point feels very plausible, with Percy planting the seeds of government corruption all along the way. Ollie is more alone than ever and facing what seem to be insurmountable odds…and it’s really quite perfect. This is exactly where I want Ollie to be at the outset of a big story like this and Percy shifts the focus of this issue between different characters in a really smart way.

That focus shifting flies because of the mad skills of Juan Ferreyra. The vast majority of this issue is double page spreads with story flowing across the two pages, but that leads to some really unique layouts and the opportunity for simultaneous story beats that are occurring in different locations. His colour work is absolutely fantastic and heightens his pencil work dramatically, bringing a richness to each page that sucks the eyes in and doesn’t let them leave. Ferreyra’s storytelling chops enhance Percy’s script immensely and 21 issues into this run, I can confidently say that Ferreyra’s issues are some of my favourite in the run.

Green Arrow #21 is a rock solid comic that has me pumped for this storyline. The odds are stacked against Ollie big time and there’s a whole city’s future hanging in the balance…high stakes, great characters, solid writing and killer art. Green Arrow #21 is a win.