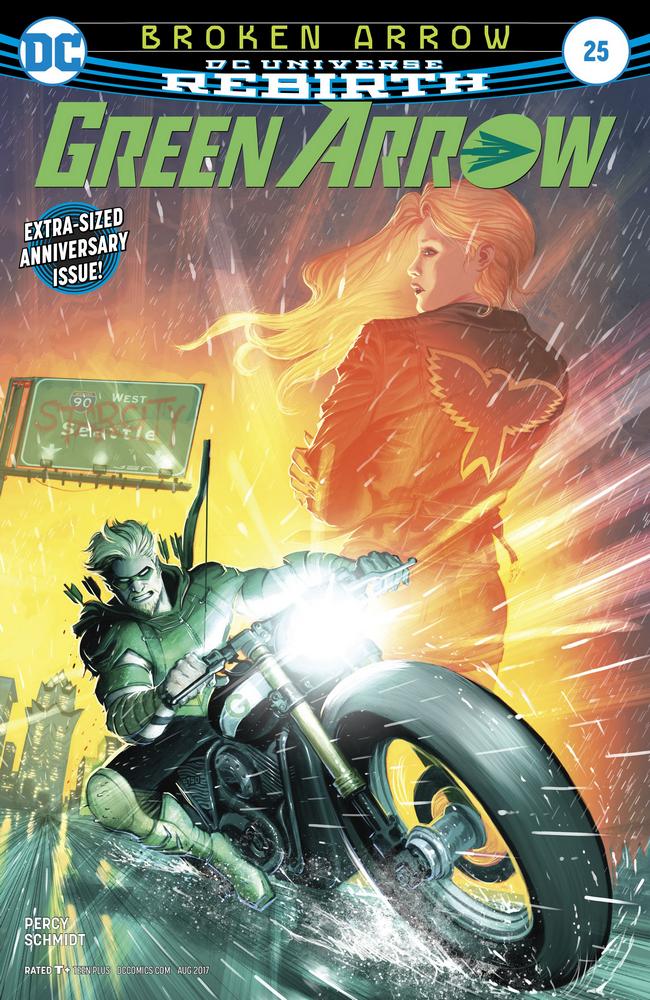 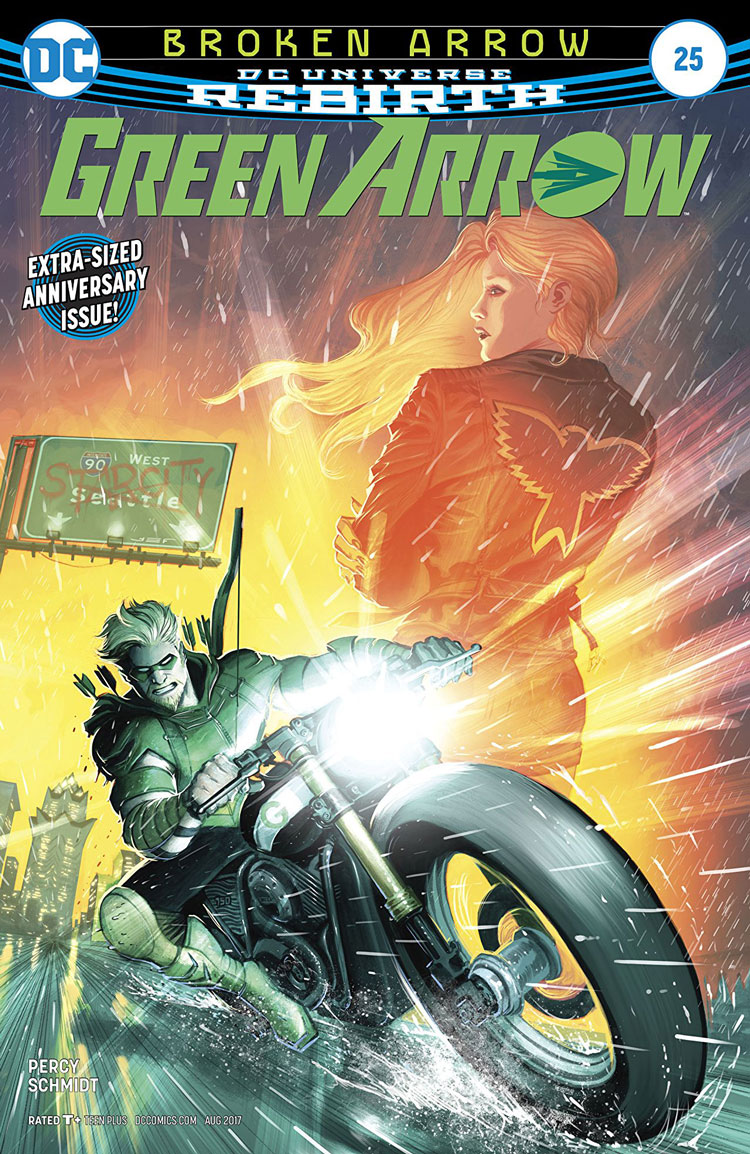 “The Rise of Star City” has taken it’s toll on the entirety of Team Arrow. Oliver is back from the “dead” and facing legal trouble, Black Canary remains at large fighting the good fight, Henry is working behind enemy lines creating tech for Star City, and Emiko continues to blaze her own trail and help as Red Arrow.

The destruction of Seattle into Star City has been a rough one. The previous arc, “The Rise of Star City” absolutely decimated Seattle as we know it and that wasn’t even the biggest shocker of the arc that carries over into “Broken Arrow”. Oliver Queen has returned to the public eye after being proclaimed dead and he’s facing persecution in the name of Law Enforcement. He’s down and out and this shift into reclaiming his status as Oliver Queen is a step in the right direction for the series and partly what the Green Arrow comic has been about. Oliver has enemies all around him and the troubled times seem to be never ending but there’s light at the end of the tunnel and interesting spins in the narrative along the way all brought to you exceptionally by Schmidt.

One of the interesting that Percy has built over the course of twenty-five issues is that Seattle, now Star City, is a character in itself. He focuses on the problems and different realms of the city. Creating and highlighting factors that actual cities are facing and it strengths everything that’s going into the conflicts of Star City from top to bottom. Ostracizing citizens that aren’t permitted into the shiner parts of Star City is a very real problem and showing the parallels with what City Hall is showing and what the local news is showing is where Schmidt draws to great effect with the opposing colors and emotions ingrained in the art. Star City is as much a character as Green Arrow is and to have the conflict truly bigger than Oliver Queen and tie together various characters, citizens, and even past story arcs makes this issue feel worthwhile.

Percy and Schmidt are a perfect match for the cast of characters at their disposal. From detailing the hard times of Oliver, to the ever courageous and heroics of Black Canary and Red Arrow, even Henry and Diggle get some spotlight in this issue that sets up the next phase of Green Arrow’s stories! The issue in particular balances super heroics in and out of the costume, as Oliver attempting to not Green Arrow his way out of his problems is growth for him as a character and Percy has him owning up to his mistakes that reach far back, far past than both Emi and he know. Schmidt provides a rough around the edges style to the fairly grounded world of Star City and accentuates the colors to go with all of the backgrounds and still remains centered around the characters. Everyone involved in the conflict of rejuvenating Star City has a piece of the story and Percy peppers both bad guys and good with conflicts to look forward too and while the comic ends with Oliver being led down a path that takes him out of Star City, I hope we’ll catch up with the Star City team every once in awhile because Percy has a strongly written supporting cast that we could always have around.

Black Canary remains as focused and driven as she’s always been, Emi is charting her own path on the road to becoming Red Arrow in full form, Henry is on the inside of the technological evolution and planning for what the Ninth Circle want to do with Star City as a whole, and there’s the quiet rumblings of what’ll happen with Diggle and Malcom Merlyn out and away from the fight. Percy and Schmidt have a lot on their plates when it comes to the future of Green Arrow but they’ve been doing just fine for twenty-five issues and with the amount of characters and the art that gives GA and friends a life and style all their own? The rest of 2017 remains strong for the Green Arrow Team and with a last page shocker that’ll leave Oliver’s world in a tailspin? Yeah, you’ll want to pick this anniversary issue up.