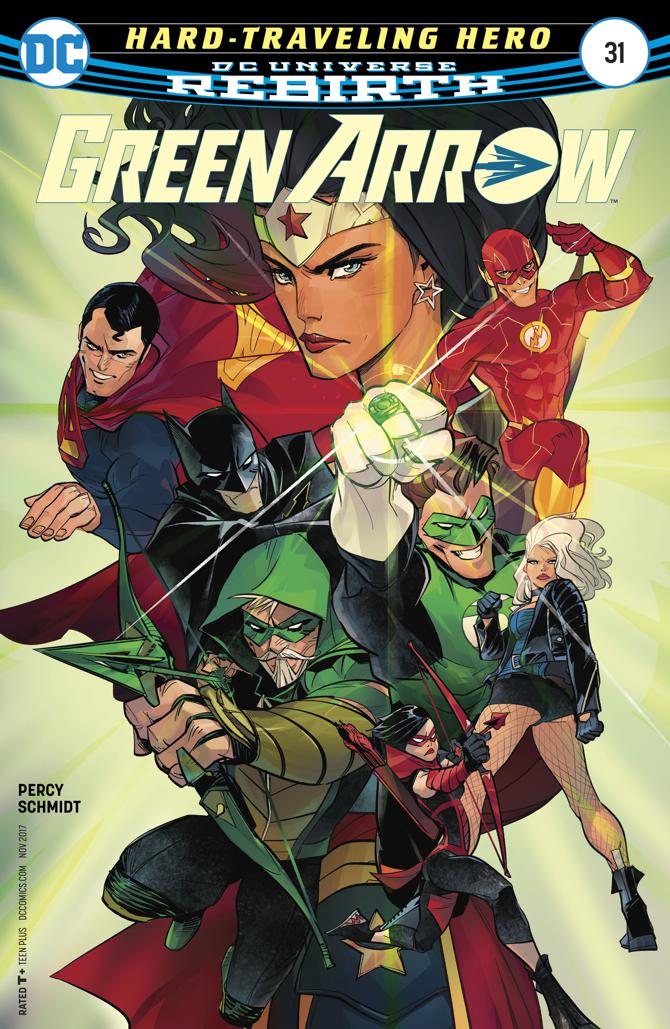 The Hard-Traveling Hero arc comes to the end of the road with Chapter Six, picking up in space with a rather precarious situation involving The Ninth Circle’s space operation. Ollie’s usually in trouble, but not typically in space and his pal with the emerald ring has been KO’d. What could go wrong, right?

Percy has built this arc well, basically setting up a Green Arrow/Justice League team-up arc that has been a lot of fun to read. Percy nails the loner/wildcard + straight-laced superheroes dynamic and it’s fun to read it all come together in this issue. He also writes a great hook into the Metal tie-in Teen Titans issue, bringing the Emerald Archer into that title into a way that makes perfect sense. The battle with the Ninth Circle has been a great arc and it is far from over, but this slight detour bringing Ollie into the larger DCU felt like great timing.

On the “home front”, Canary and Emi’s story arc goes explosive and I can’t wait to see more of where this goes. This story felt a bit short considering the build up, but let’s face it, this is a very minor criticism. Hell, I’d happily read a book featuring this team-up, but if this is what I get, I won’t complain. Percy and Schmidt work together brilliantly for the explosive moments of this storyline and when that Canary Cry rips out, it’s a wonderful thing.

Speaking of Otto Schmidt, he really does a superb job in this entire issue. His style has some grit to it, which fits considering how Ollie is getting the crap kicked out of him and he juxtaposes Ollie’s scrappy nature with the JL powerhouses well. He captures the frantic, violent nature of the conflict in the space station well and the hellish figure from the Ninth Circle is an imposing “final boss” for the arc. Schmidt’s work on this title is equally as good as Ferreyra’s and it is a special thing to watch these great artists (and colourists) working off of each other to make Green Arrow really rock.

Green Arrow #31 is a strong finale to what has been a fun arc. Ollie’s part of the larger DCU without being fully drawn into Metal with his main title, which is a smart move by Percy. The Seattle based stories move along nicely here, and Schmidt brings the thunder to the end of this arc. One of the strongest books coming out of Rebirth, Green Arrow is still firing on all cylinders.