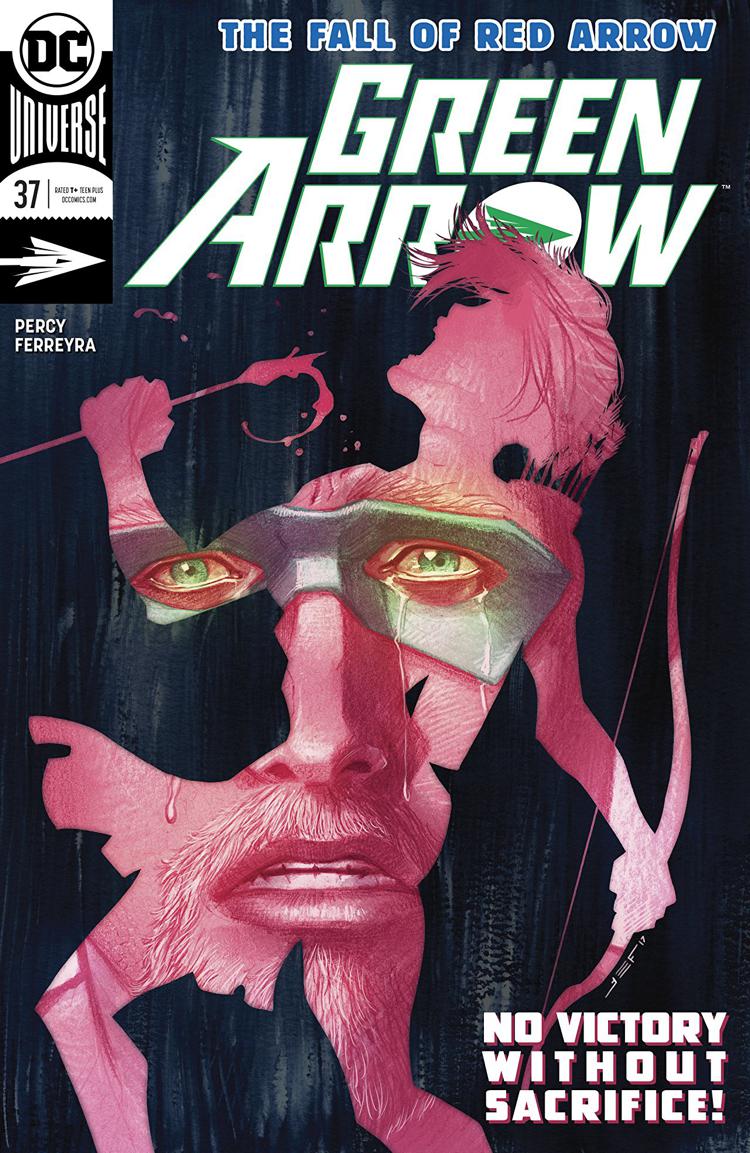 The battle of the arrow wielding moms comes to a tear-jerking and deadly conclusion.

From the very first issue of Benjamin Percy’s run, Oliver Queen has been hunting down the Ninth Circle and their gang that preys upon the forgotten of Star City. While the Ninth Circle wasn’t completely taken down here, Oliver’s family drama and involvement in the organization has come to a head with his mother and Emi’s mother slinging arrows across’s the Ninth Circle’s secret temple. Previously, Emi was hit, leaving it looking like Red Arrow has been fatally taken out of the picture. Now, her mother is ready to forfeit everything to take down the woman who stole her child’s life.

Ferreyra’s art slides between highly detailed and perhaps haphazard feeling. The action sequences have a great flow with panel layouts and spacing of characters verses action. Since I do not know if more time was spent on the temple sequences, I cannot say for sure, but they feel more complete compared to the pages at the end. Details on Shado, such as her tattoos, Oliver’s beard and the costume of Black Canary feel very alive and exact. Scenes occurring in the Poole home and the hospital feel less detailed. Facial portions look off, compared to body shapes and backgrounds over simplified. The build-up afterward, with all of the world watching the trial about to unfold, including heroes around the world, feels much more complete.

Percy continues his metaphor about Oliver being an ally for a “new” America; that stands up for the downtrodden. Obviously, this is the America that we’ve always embraced and been taught since childhood should exist… although it’s not always for all. Oliver’s mother, Moira, symbolizes the “America for some” mentality, lecturing him about how he’s “lost his pride.” She calls his perception of the American dream “perverted.” It is clear she is an incarnation of white supremacist America. She believes that success should be reserved for the already wealthy. If there were any doubts left after the short lecture, Black Canary calls Moira a psychotic Ayn Rand decimating any room for doubt.

There is a major sacrifice provided by Shado, Emi’s mother, that had me unexpectedly in tears. It was a choice that, while not shocking for a mother to make, was still unexpected in this story. Diggle is also provided with a redemption and fist-pumping return to the action. This provides a great moment of commentary about friendship, forgiveness, and judging actions but loving or forgiving a person afterward. Wendy Poole’s storyline becomes further complicated after a home invasion. While it shows her as tough and protector of her family, I do wonder what the implications could be for Ollie’s trial.