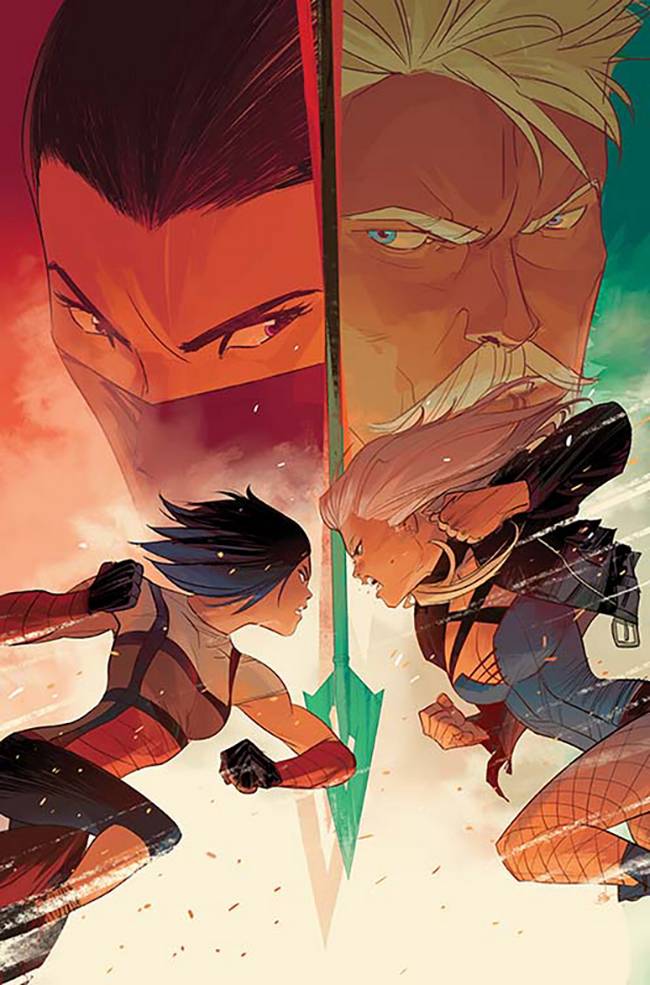 On first glance flipping through Green Arrow #4, it appears that the main plot is Arrow and Diggle squaring off. Writer Benjamin Percy and artist Juan Ferreyra quickly remind readers that there is a lot more going on in the series though, as Emiko has betrayed Oliver Queen and is now with the Ninth Circle, who is running a human trafficking organization and have locked down Queen’s finances.

Ferreyra provides all of the art in Green Arrow #4, drawing and coloring the issue. He uses vibrant colors throughout, frequently filling panels with vibrant colors, but never letting those colors consume the characters in them. His painterly style works better for specific imagery at the start or end of an action sequence, like Dinah leaping off a building or Henry Fyff fighting back sleep to open his eyelids. These presentation pieces tend to hamstring the storytelling a bit, at least in transmission. Immediately following the aforementioned leap, Canary faces off with Emiko, but the storytelling takes leaps of its own, like where Emiko’s arrow strikes, how it happens to get there, and the immediate effect it has.

Ferreyra gives the readers some juicy visuals to study, and his prominent images encourage readers to expound on the action between panels, rather than being spoonfed. Just as every hit isn’t a homerun in baseball, every gorgeous image doesn’t tell a seamless tale in comics. Ferreyra also inserts some traditional comic book bits, like the shadow images of Canary evading one of the Ninth Circle goons. There’s a wide range of setting, character, and story for Ferreyra to present, and letterer Nate Piekos does a nice job of keeping the art clean and sharp. His word balloons have no outlines, which helps them merge into the tale and the caption boxes are tightly appointed to the corners.

Some of Percy’s dialog comes across as excessively flowery, fine enough for comics, but bordering on too much melodrama. Even for comics. Diggle’s speech about tinfoil seems ripped from a CW Arrow script, likewise for Canary’s dig that traitor isn’t a strong word. Those moments, coupled with the ornate drawings were enough to disrupt the flow of the story in Green Arrow #4 for me more than a time or two. Ollie’s dialog seems natural enough, and most of the other characters hit their marks, but those couple of instances – on consecutive pages – gave this story speed bumps it didn’t need.