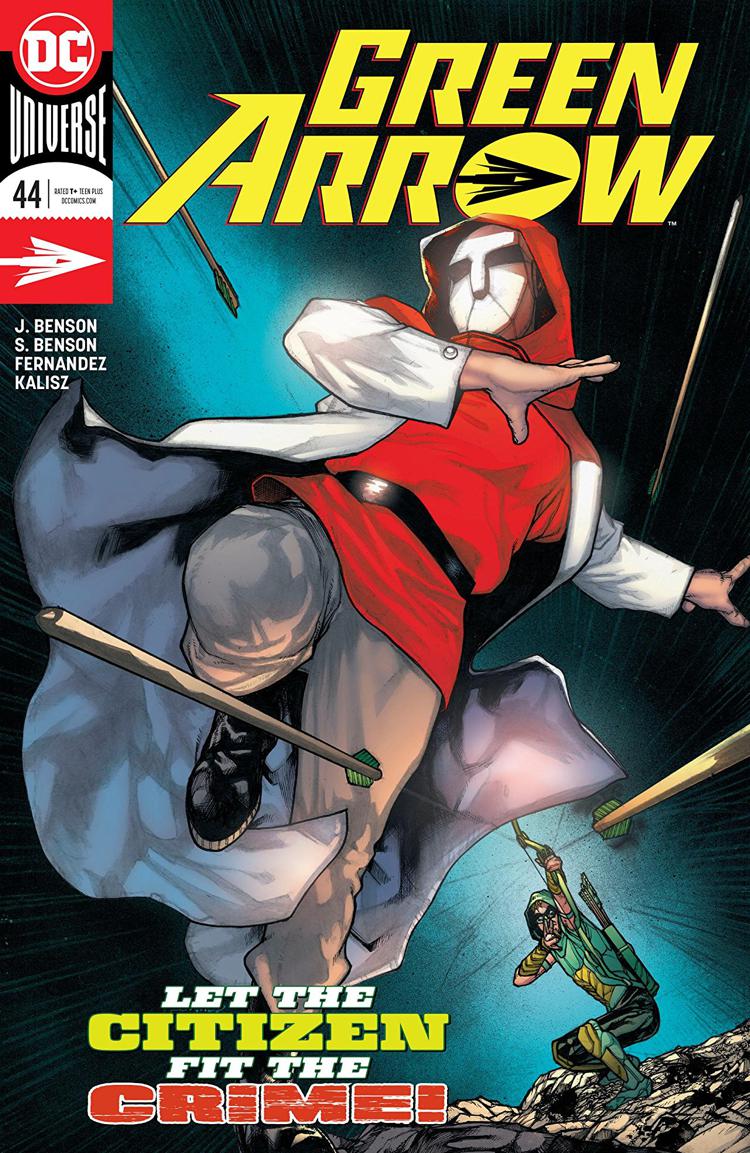 The Citizen is the vigilante hero gone too far, Robin Hood without a conscience, and he’s stirring up a lot of shit. The Bensons capture the spirit of the Green Arrow run to this point well, diving straight into the middle of The Citizen’s storm of terror, making things immediately hard for Ollie…and Ollie’s at his best when he’s got the deck stacked against him. The politically charged nature of extremism that permeates the issue ticks a box of what is core to Green Arrow and what sets him apart from other heroes, and shows that The Bensons are dialled into what makes Green Arrow (and Black Canary) sing.

The dialogue here is snappy, and the pace of the story is great. There’s a fair amount of ground covered in this issue, without it feeling too frantic. For readers who are starting the series at issue #44, they won’t feel like they’re missing a ton of info, and for readers who’ve been with this volume since the beginning, they’ll feel right at home in the aftermath of all that has happened in Seattle in the previous 43 issues. This is a logical next step for the city and for what Ollie has in front of him based on what happened previously, without feeling bogged down in old baggage. That’s a hard line to walk, and the Bensons walk it well.

Javier Fernandez’s pencils are 70s cop movie gritty, and Green Arrow fans are going to feel right at home, visually. The colour palette used by Kalisz takes Fernandez’s pencils and continues the visual aesthetic of Seattle that Juan Ferreyra and company built prior to this arc. In that manner, we have the same feeling of a jump-on point set in a world previously established, which I am personally a huge fan of. There isn’t a jarring new take that threw my attention off course, or a visual style that doesn’t feel much like Green Arrow.

The layout work by Fernandez is fantastic. It keeps the motion and energy of this comic moving, and my eye was consistently entertained by what was in front of me. From the high speed chase to the high stakes action occurring later with the Citizen, at no point do these visuals feel “stock” or like they are generic superhero art. This comic has a lot of energy in the story and the visuals convey that extremely well.

Green Arrow #44 is a damn strong issue in this new run. The creative team makes this story feel like an organic extension of the previous run as well as a fresh start for new readers, which is no small feat. Without question, I’m going to be continuing with this story and I’m intrigued to see where Green Arrow goes next.