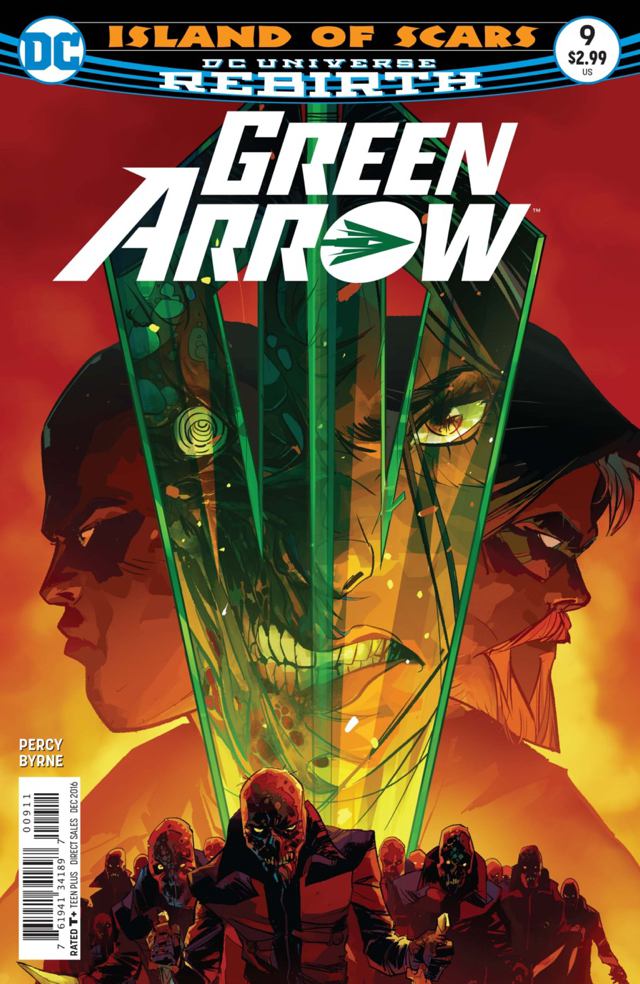 After the steamiest moments in superhero comics this year, Arrow & Canary search the island to find Diggle and get the hell off the rock. Naturally, they find something bizarre and are stuck in something more sinister than they had anticipated.

Which is all great. When it’s executed as well as this is, the schtick of heroes blazing into something headfirst and being in over their heads (and consequently also messing things up worse) is just entertaining comics. Percy has zeroed in on what makes these characters great and I love the dynamic he has built between Ollie and Dinah. These two have a connection and it’s simply nice to read, as there aren’t many couples in comics these days. Dinah is the character that makes Ollie work and Percy definitely gets that, with Ollie even admitting it at points on the page. The title hero is stronger when she’s on the page with him, and I’m continually pleased as this title rolls along by how well Percy is fleshing out Ollie’s supporting cast. They all enrich him and strengthen him as the title character of this book in different ways and they allow Percy to keep Green Arrow off in his own world and stories without the need to be embroiled in the crossover of the day to facilitate some interactions with other characters. Percy works really well with the arrows he’s got in the quiver and this issue supports my belief that Ollie works best in a group (certainly this Percy version, anyway).

Stephen Byrne is back on art duties after an Otto Schmidt issue and while his style isn’t as steamy as Schmidt’s was last issue, I love his work on this comic. The layouts are fabulous and captured my attention with each page flip and Byrne really gets the fun aspects of Ollie and Dinah’s banter. There’s a twinkle in their eyes and he makes the characters smile, something that is really refreshing about this book. There is humour in this artwork and also some really well crafted action, with Byrne delivering fantastic visuals on each and every page. His colour work is as strong as his pencils, and this is a very dynamic and lively issue with some great storytelling.

Green Arrow #9 is another winner in what has been a great series thus far. Until this run, I’d never fully clicked with Ollie, but I think that is because I’ve never read him with a strong supporting cast and now that I have, I’m really liking the character. Percy is being paired with some great artists in this run and Byrne is no exception, leading to issue #9 being another rock solid read.