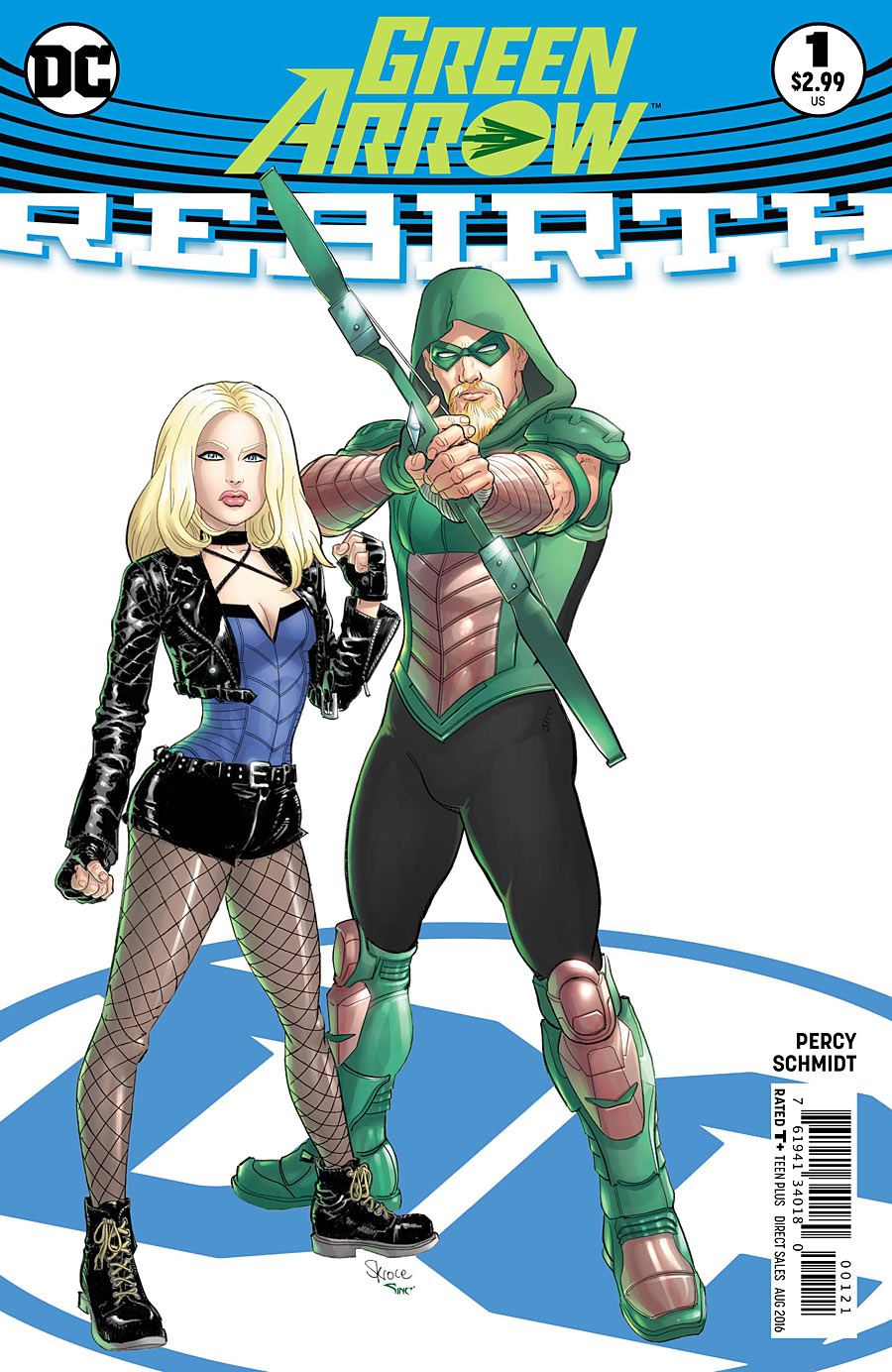 It’s déjà vu all over again, as the Black Canary hits the town and Green Arrow begins to investigate a run of missing homeless persons from Seattle’s streets. Will the couple reunite as fate would dictate or will Oliver’s bravado be too much for Dinah to stand?

Of the four Rebirth specials hitting stores this week, I must admit that Green Arrow had me the most torn from the get-go. From its earliest announcement as a pseudo-team-up title between the Emerald Archer and his “Pretty Bird,” I wondered how comfortable I could ever be with the pairing again after so much water under the bridge.

Mind you, the characters at this point in their lives have none of it. None of the torrid romance. None of the infidelity. None of the irrational clinging that took nearly a decade to work out of the Black Canary’s system — only to immediately fall back into a marriage proposal. A marriage to Green Arrow, mind you, that lasted all of a minute before they fell apart again.

None of this made me want to see Black Canary subsumed once again under the Green Arrow charm, particularly after a year of exceptional solo adventuring with her band in her own self-titled book.

That’s the trepidation of days leading up to this issue’s release. The reality of execution is another matter entirely.

And that execution leaves me cautiously optimistic.

Percy captures a sense of that Bronze Age back-and-forth prattle that Ollie and Dinah played off so well in issues of Justice League of America. Long before the comfort of a long-term relationship set in. Long before the betrayals and the regrets. It’s both flirty and challenging of each other, and goes a long way toward leaving Dinah and Ollie on equal footing, despite the name above the marquee.

And part of that could also be the advantage of age Percy has built into the characters in this moment — or lack thereof. For as much as my husband wailed at the deaging and de-bearding of Ollie Queen at the start of the New 52, the relative blank slate and subsequent depth a handful of creators have managed to fuse into him, slowly but surely, has helped. It’s helped a lot.

Percy’s own focus, pre-Rebirth and now, is a key part of taking Green Arrow back to his roots as a genuine Social Justice Warrior. This is not my supposition, by the way. He literally is called and calls himself those very words and all I can do is give a round of applause emoji and grin like a beast at the development. Because, like Ollie’s lack of suave around Dinah’s cool, it’s taking the very best of what Green Arrow has been over the years and punching it into its youthful modern self. Yes, Green Arrow has always been a raging liberal, and in many ways stuck in his own privilege, so it’s time to call it like it is. And use that territory (and Dinah’s skepticism) to pull it — and its reactionary antitheses — all apart.

Otto Schmidt takes solo art duties for the Rebirth special, and forward into the first arc, alternating with fan favorite Juan Ferreyra for ongoing art duties. Schmidt has a distinctive style that feels a little bit rough for my tastes, but suites the rougher edges between Ollie and Dinah fairly well. Neither character is designed for hyper-heroic super-human antics, so the grit and scratch of his renderings feels suitable.

Page layout too is suitably styled to feel controlled and stable when dialogue is the primary focus, but a bit of a jumble when the action takes hold, particularly in underground scenes. Where Schmidt falls a bit short for me is in facial emotions and body shape, as both Ollie and Dinah feel stiff and posed even in the most dynamic of moments.

And I have to mention the stark difference between Green Arrow’s full-panel reveal on page 4 — a shot taken from below of him, barrel-chested, jumping into action — and Black Canary’s own on page 6 — a contorted stride that makes sure to capture both her chest and ass in a game of vertical Twister. Not the best intro for characters designed by the narrative as equals.

Overall, Green Arrow: Rebirth leaves me optimistic for the future provided Percy and Schmidt (and eventually Ferreyra) give Ollie and Dinah’s relationship the fresh start it deserves. And that doesn’t mean relegating the Black Canary to sidekick status or Green Arrow to guest star in his own book. It means — like any great relationship — a challenge of equals. Like the best of times with the couple’s early days, Ollie and Dinah should make each other better. So far, so good.