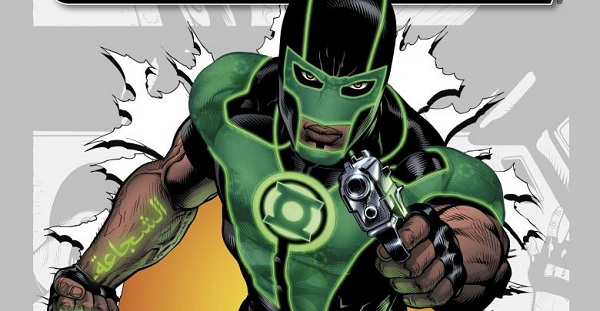 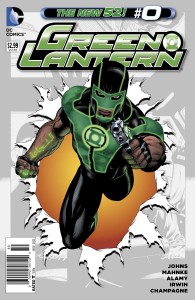 Zero Month at DC Comics begins as most (but clearly not all) books travel back to the days before the #1s — from years to decades before what we’ve seen depicted over the last 12 months. The first exception to this pattern, however, is Green Lantern #0, the introduction of new Earth Green Lantern and now DC’s most prominent Arab-American hero, Simon Baz.

Following the trail of a Green Lantern ring in search of its new wielder, this issue picks up immediately after the events of last week’s Green Lantern Annual. We meet and are given a brief history on Baz and how he came to be unjustly pegged as a domestic terrorist. Johns rolls out Baz’s motivation and personality with seeming effortlessness, giving the reader so much insight into his life in a very short span of pages. He was raised near Johns’ own home (Detroit) in Dearborn, Michigan, both the hometown of Henry Ford and the largest proportion of Arab-Americans in the United States. Baz grew up as a Muslim in the shadow of the two towers — subject to racial epithets, profiling and the same economic downturn the rest of the country experienced. However, his path to and arrival in federal custody under suspicion of terrorism is where the story really gets going.

This is not a story, unfortunately, that most Americans are ignorant of in the years since 9-11. Baz isn’t exactly a do-gooder, but the escalation that occurs in a matter of panels during his interrogation put the hairs on the back on my neck on end. Mahnke has been illustrating the adventures of Hal Jordan in the book for three years now, but you’d think he was born to draw this new Green Lantern.  His handling of and character design for Baz is sharp and clean, giving him distinctive features without resorting to caricature of any sort. Action is fluid and vibrant, particularly when the ring meets its new bearer, but static scenes of Baz’s interrogation are just as compelling.

Given that my expectation for DC’s Zero Month books was simply to be one-shots that provide (marketing and sales-friendly) jump-on points for new readers, Green Lantern #0 was a great surprise. Not only did it succeed on that level, but the issue also stands as a great next step in the ongoing Lantern saga — and a compelling beginning for an intriguing new character. This is indeed a high water mark towards which the rest of September’s offerings can aspire.