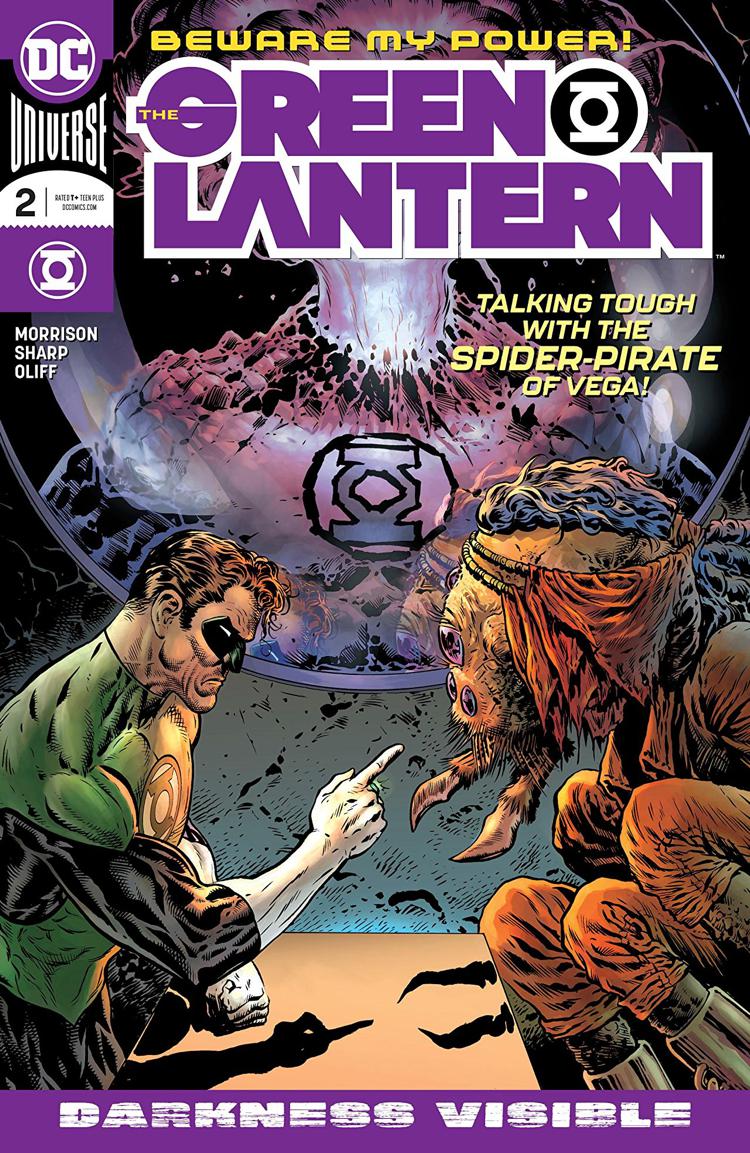 If there is anything that Grant Morison was famous for with his Batman run (in this reviewer’s opinion, anyway) it was reminding readers of all the strange things that had come before him. When I first learned Morrison was going to be doing Green Lantern, I braced for all the utterly bizarre and fascinating corners of the galaxy that he could turn to for inspiration. Lucky for me, and for all readers, really, he has turned not only to the visible universe, but the unseen and non-traditional aspects of it. Green Lantern #2 brings readers into the bizarre domain of Rot Fap Lan to remind them, yes, Dark Star is a character who exists. He serves a particular kind of purpose for the plot that is being built, but he is a focal aspect to the story. From the slavers of Dhor, the F-Sharp Bell Corps and the Obsidian Depths, to the newer and weirder alien species like tarantula-beings, Morrison is digging deep into the more “weird” aspects of the Lantern mythos with gusto. This is, by and large, a good thing. I am not one to say Green Lantern comics themselves were ever exactly boring, but some writers have prioritized characters over setting, where Morrison seems (so far, at least) to be pursuing the opposite approach.

Morrison’s Lantern run is seemingly less invested in Jordan as an individual as he in Jordan’s policing methods, something which takes up a good chunk of the second issue’s page real-estate. We don’t get a re-hashed assessment of what Jordan’s role on the Corps is, he simply slides into his routine alongside Trilla-Tru, a new character who seems like she’ll be a useful counter to Hal’s part in the story (hopefully, anyway). One part of the comic stands out as being particularly inspired, that being where Jordan’s interrogation techniques get into assessing what an alien would or would not find gratuitous as torture. A normal request for life in prison, under Jordan’s assessment, might seem worse than death to certain aliens, especially ones whose senses are built differently than, say, humans. The whole sequence is fantastic and worth a read, if only just to see Morrison actually write a good cop/bad cop scenario involving a “poor little rich girl” space pirate tarantula.

On the other side of the plot is Evil Star, an on-again/off-again villain who was adapted for Green Lantern in the 1960s. Star’s use provides another chance for the slowly-emerging villains (apparently lead by a Controller named Mu and his “Blackstar” minions, who are different from the normal Darkstars) to show off a little. From rescuing Evil Start to a rather large scale abduction scheme, the roster of baddies now includes the slavers of Dhor (the same species as the infamous, if not exactly threatening Green Lantern villain, Kanjar Ro). While the aims of Mu and his more mysterious associates are not wholly clear, they seem to weapon merchants who at least those who are happy to use weapons in a way to manifest their ambitions. An un-named “commander” of the Blackstars stands out because of possible ties to another, older villain devised by Morrison in the past. In time, obviously, answers will come, but for now the issues does well in pushing the plot along and making sure the villains appear to be making continued progress in their quest.

The art, for me, is part of the charm of this comic. The style that Liam Sharp seems to be going for is an almost retro approach. Some of the backgrounds fade away into bright or nebulous gradient patterns, while faces and clothes become illuminated in rich detail. One particular panel of a Dhor villain stands out as particularly bizarre one because of how almost over-detailed it was, like a MAD magazine kind of parody image of an alien slaver (and, also, did anybody else get a Mr. Burns vibe from it?). The detail is fantastic, especially where sequences of transformation or close-ups are called for. One sequence stands out from the start were a Blackstar undergoes a particularly nasty transformation. Sharp draws movement very well, so it seems that Morrison is ensuring he always has enough “moving” elements to play with.