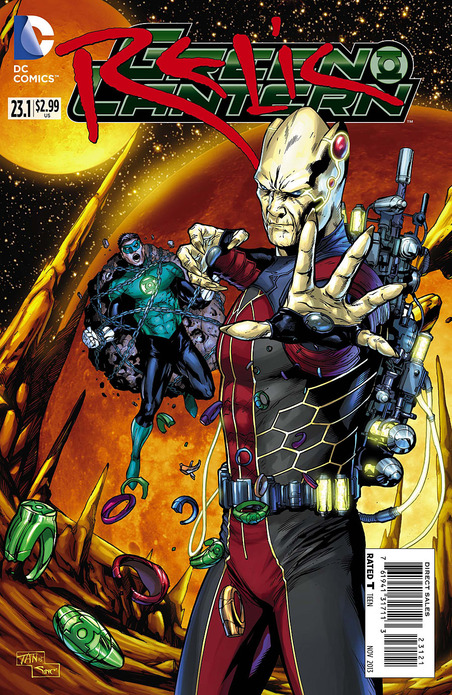 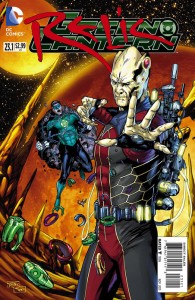 The inaugural Green Lantern Villain’s Month title is a straightforward origin story for the imposing and mysterious Relic, last seen threatening Kyle Rayner, Carol Ferris and the Templar Guardians out at the edge of space.  It’s an excellent jumping on point if you’d like to join in for “Lights Out”, which starts next month.

Relic’s origins have already been addressed in the GL books, but this issue provides a decompressed version with some holes filled in. Basic plot spoilers ahead! Relic’s story begins in an entirely different universe where beings called Lightsmiths use the energies of the emotional spectrum just like the different Lantern Corps in “our” universe. There is an impending doom, Relic tries to warn everyone, and they do not listen. He ends up transported to our universe, literally a relic of a dead creation.

The story didn’t enthrall me, exactly, since I already had the general idea of what Relic was and why he was threatening the Lanterns. I do appreciate his motivations more, and seeing his universe – even only snippets of it – was fun. My favorite detail in the book is the appearance of the Source Wall; it was the first time I’d seen it in the New 52. The book was enjoyable, but it felt like a backup story stretched out for an entire issue.

The art was beautiful, though a little less than what I was expecting, given Rags Morales’s reputation. Usually when you look at his art, you can tell it’s his work immediately. I’m a fan of his, and I felt that this particular piece was lackluster. Maybe it was the absence of human faces, aside from a few side shots of Kyle? The book is still beautiful, though, saved entirely by the rich, gorgeous colors. Andrew Dahlhouse takes relatively flat images and makes them pop (and he doesn’t need a 3D cover to do it).

Overall, the story feels a bit like an afterthought – something meant to be a short story that got padded out into 22 pages. It’s not bad, it’s just not as good as the stuff Robert Venditti has been doing the last 3 months. It did get me incredibly excited for “Lights Out”, which is impressive given how much Lantern Event Fatigue I’ve had. So, while this isn’t the A++ example of what the Green Lantern books have been recently, I’d recommend you read it so you can jump in with issue 24.

Thanks to Jessica Boyd for assistance with this review.