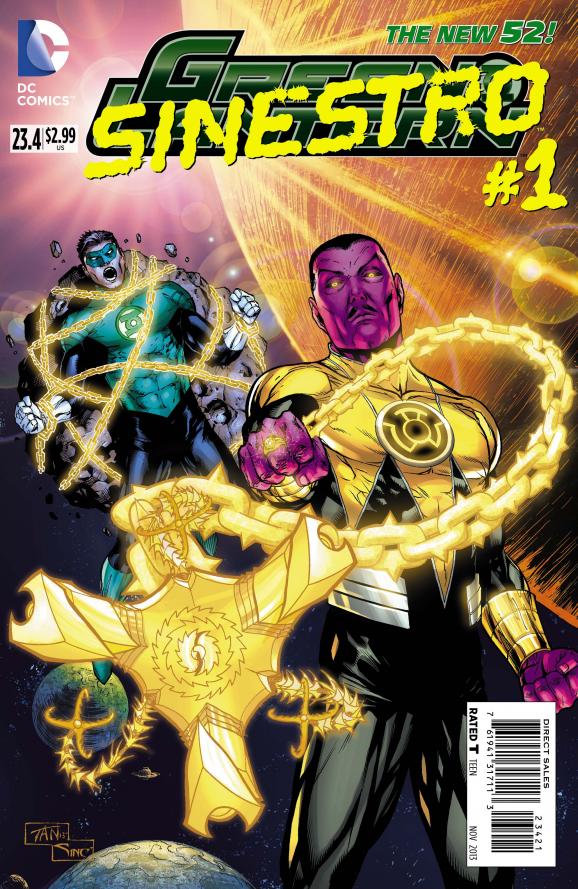 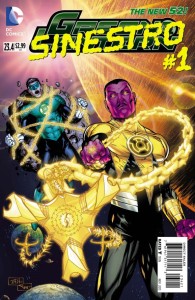 Geoff Johns did a lot of amazing things during his 8-year stewardship of the Green Lantern books, but one of the most significant was taking Sinestro from one-note Silver Age caricature to complex leading man. Sinestro Corps War was one of the most successful (financially and critically) stories put out by DC Comics in the last decade. It came as no surprise that earlier this year DC announced the Sinestro Corps would get its own ongoing book in the New 52. Unfortunately, the Sinestro at the center of all that love and fervor and creative energy is nowhere to be seen in this book. The story is bland, the characterization flat (and incongruous with existing continuity) and the art poorly matched to the subject matter. What should have been one of the best Villains Month entries turned out to be, in my opinion, one of the worst.

The story is a literal step by step retelling of Sinestro’s origin, almost like the writer skimmed Sinestro’s page on the DC Wiki. Notably, someone decided to revert back to the 1990s “archeologist” background, undoing Sinestro’s past as a cop (established in the New 52). His origin is now almost a mirror of Hal Jordan’s – alien ship crashes, injured Lantern inside – only Sinestro borrows the ring, then refuses to give it back, letting the Lantern die. Beyond this, a lot stays the same – he abuses his power, is stripped of his ring and kicked out, then forms his own Corps to teach the Guardians and the Greens a lesson. The Sinestro Corps War, his return to the Green Lantern Corps and his eventual slaughter of the Guardians still stands. We finally get actual explicit confirmation that Soranik Natu is his daughter by Arin Sur, something Johns was a bit vague on during his run. Welcome back, Soranik!

As mentioned above, the story undoes existing continuity – events that happened as recently as issues 19 and 20, this year. That in and of itself is perplexing to me, even taking into account the jaundiced view of the “narrator”. At issue 21 all the Lantern books moved forward with a new direction, but none of the old stories have been negated or contradicted until now. The greater sin of this origin is that Sinestro is stripped of what, in my opinion, made him so compelling: he is no longer a “heroic” villain. Sinestro did evil things for good reasons. It doesn’t justify the bad things, but it does allow Sinestro some sense of nobility. When he started out, his heart was in the right place; he was so courageous that a ring chose him and he was “the Greatest Green Lantern.” The story of his fall, rise and struggle with redemption makes him more than the cackling villain attacking Hal Jordan with a yellow chainsaw. It makes him an interesting, complicated, fully-realized character. By having Sinestro essentially steal a ring at the get-go, all his accomplishments become fruit from the poison tree. He’s reduced to being petty, selfish and vain. He’s back to being a one-dimensional cartoon. That’s not the Sinestro who is compelling enough for his own book.

The art, unfortunately, is also a miss. I enjoy Dale Eaglesham’s work – I loved Villains United especially – but it’s not well suited for this. Sinestro is back to having a misshapen, oversized head (something GL artists have been consciously shrinking over the last few years), and all of the faces are squished. Arin Sur, who has been drawn remarkably consistently for such a minor character, looks completely different (again, we’ve seen her already in the New 52). The story structure was so boring that there weren’t really any opportunities for the art to soar; Eaglesham is left delivering storybook panels over and over and over.

If you are new to Sinestro and you read this book, I’m not sure how interested in him you’re going to be. The issue assumes a lot of knowledge about pre-existing events in the Green Lantern books (especially New 52), but contradicts many central plot and character points. The end result is a boring, cookie-cutter villain who somehow earned the greatest weapon in the universe through deception and then earned it back through murderous rebellion. Both Sinestro, and the Green Lantern mythos at large, are done a disservice by this issue.