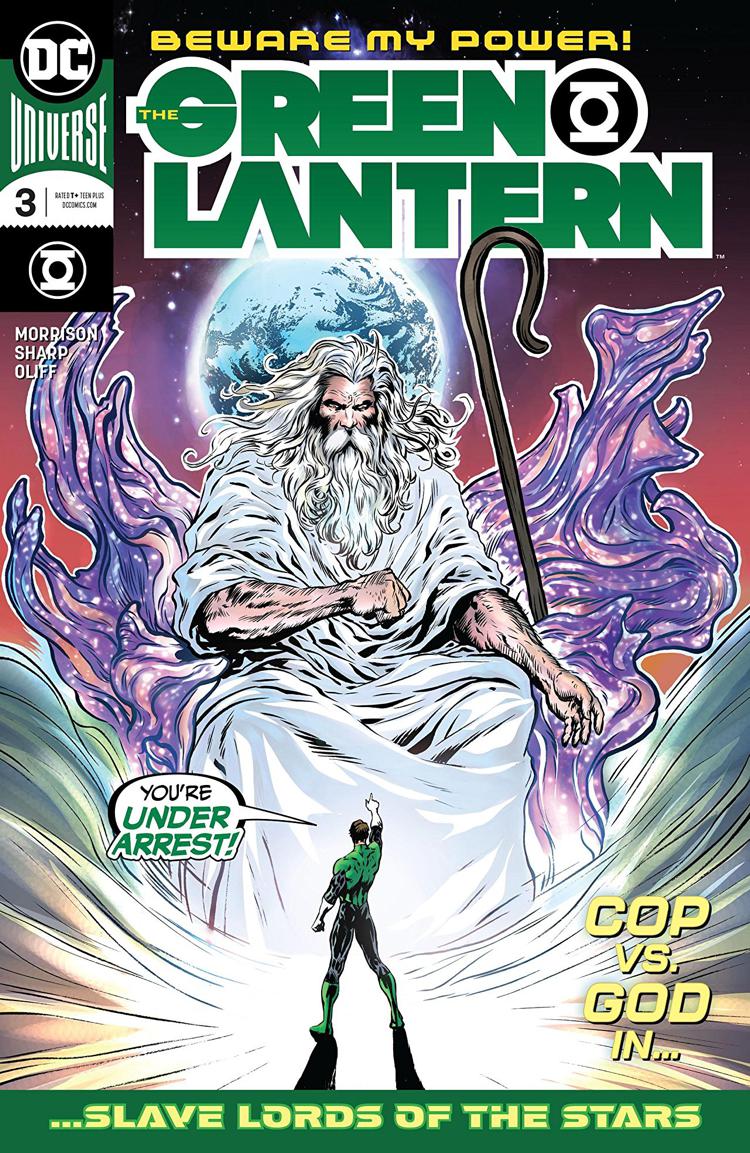 Expecting Grant Morrison to do anything conventional in a comic at this point in his career would be massive mistake, but even I didn’t expect the final page of this comic to happen. There has long been a trend in comics to view Hal Jordan as a very straight-laced (but, paradoxically) rebellious character. He tends to buck tradition when the higher-ups are bad, but otherwise he tends to be the kind of character who tries to keep the Corps to its values. Well, considering that, this last page sure raises some questions about what, exactly, Morrison thinks Hal values. To be blunt, I am not against this ending, but it is certainly something shocking enough that it could be considered out-of-character … sort of.

While the main plot involving the Blackstars continues onwards, most of this comic is a follow-up the fact that Earth was captured in Issue #3. This issue quickly resolves that plot, but the way ‘how’ is part of the fun. Hal and the Corps moves to engage in a fire-fight against slavers, but the main action involves Hal versus the buyer of Earth. The exchange between the pair is peak Morrison, with the divine god-impersonator citing various forms of contextual complexities to justify how he is able to rightfully own the stolen planet. Green Lantern comics and the issue of jurisdiction issues isn’t new, but Morrison pushes the premise here to its strangest limits. One of the funnier moments involves how the Justice League is handled during this whole ‘stolen Earth’ crisis. This moment almost makes it seem that this comic has no attachment to any kind of continuity within the larger DC continuity, and that actually works in this comic’s factor. Obviously, the story builds on the return of the Dark Stars from pre-Morrison writers, but you could start anybody on these first few issues and they’d be perfectly find understanding the plot’s basics.

Liam Sharp shows off his talent for rich, but at times excessive, detail once more. Sharp’s talents are obviously geared towards moments of almost Ren & Stimpy levels of focused detail, and there are moments where that works. For example, the revealed form of Earth’s captor plays well precisely because of Sharp’s abilities, but in other places this feels off. For example, the alien who auctions Earth in one panel is presented with a nauseating level of detail … and in the very next panel the style is back to being conventional. Still, despite some of these kinds of moments, the art is fantastic throughout. Sharp’s pencils deliver excellent facial designs, such as for Steppenwolf, in one of the funnier/stranger cameos.

In short, this comic continues the weirder-than-expected style that has been on-going since the first issue, and the ending panel is the kind which I might actually say is shocking. Not shocking in that Hal hasn’t done things similar to this before, but more because it comes from Hal’s raw, angry response to the situation. I imagine this moment might spark some controversial exchanges, but it doesn’t detract completely from the fact that Morrison and Sharp have become a great team for this series.