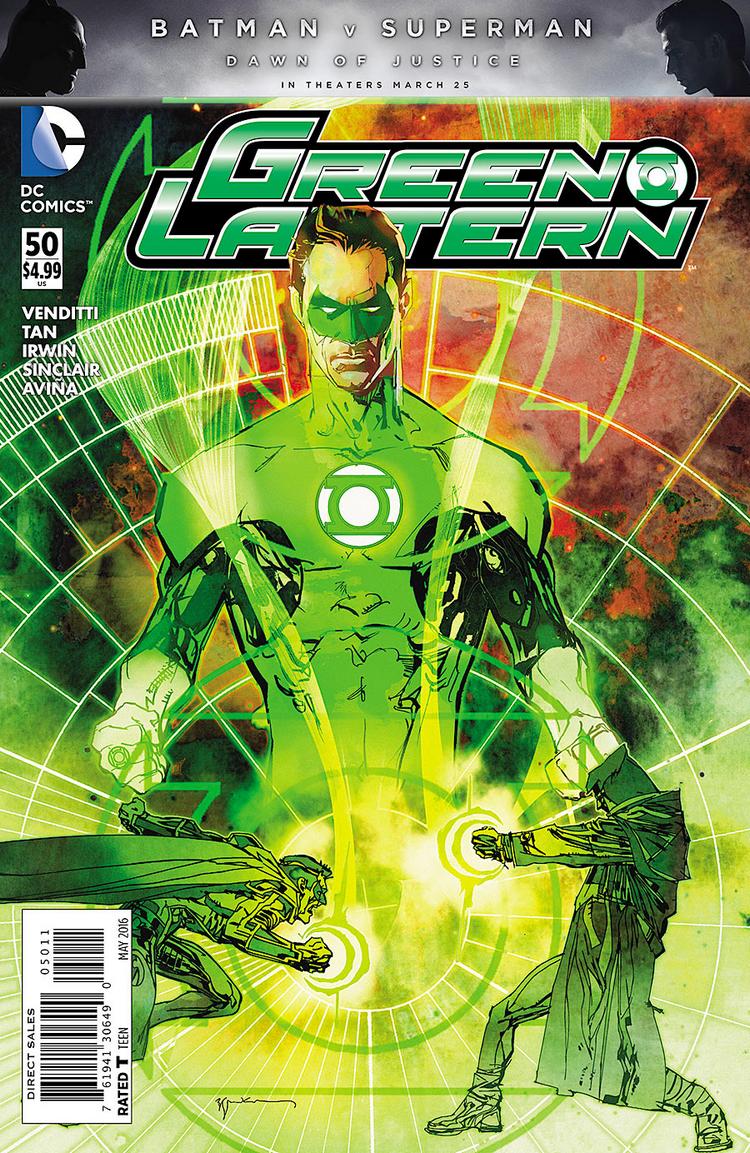 The build up to this issue has been a slow burn, but it is here: Hal Jordan vs. Parallax…ring the bell.

The two Hals rip it up in this issue, the 50th since the launch of the New 52, but I’m sad to report that…that’s about all that happens. This is an over sized, landmark issue that has featured build-up through the last few issues of Green Lantern and about all readers get here is a brawl between Hal & Parallax. It isn’t a particularly poorly written brawl, and there is potentially quite a game changing cliffhanger for Hal going forward, but the journey getting to that cliffhanger is very straightforward and predictable. There are a couple moments of intriguing dialogue between Parallax and Hal’s family that he is shocked to see, but that flash in the pan is tossed aside as these two Hals start pounding the hell out of each other. I’m not against a brawl, this is superhero comics – heroes fighting villains is a big part of the genre – but for what this could have been, I can’t help but feel this one didn’t hit the mark. This comic feels like it had to hit one story beat for Hal and took a whole oversized issue to get there, building no subplots or anything else along the way. It feels like a story that would be easily told in a regular sized comic (potentially with room to spare) got stretched over a ton of extra pages without the addition of anything to make the issue compelling or kickstart something awesome down the road.

On the art front, the same “stretched” feeling applies. Billy Tan and Vicente Cifuentes team up to deliver this story and both artists deliver inconsistent work that feels rushed at a lot of points in the issue. Tan’s work does not mesh very well with Cifuentes’ work, with the former’s lack of facial detail and finishes coming across as jarring where Hal’s family are concerned. The slower moments of the issue, before the brawl begins, are stiff and rigid, with these family members looking awkward and like plastic action figures interacting with each other. The characters are somewhat void of personality, which detracts from the words being spoken due to the art being so stale. When the brawl begins the art gets better, depending on the inker, but there are few jaw dropping moments. With an oversized issue and Parallax going toe to toe with Hal Jordan I expected a lot of Lantern constructs flying around, but what there isn’t a ton of here is big splash page madness. There are a couple full page images in the issue, but with the oversized issue and more than enough room to cover the story beats for this comic, I think it’s a shame that there are so few double page spreads. There are artists in the industry working on comics that are huge in scope that would take this room and run with it, and that just doesn’t happen in Green Lantern #50.

To boil it all down, Green Lantern #50 is oversized and also overpriced. I’m all for extra pages and of course that costs more, but this is a story that could have fit in a regular sized comic without trimming any necessary details which is quite disappointing. Hal vs. Parallax is a main event worthy brawl, but the execution doesn’t live up to billing with this one.