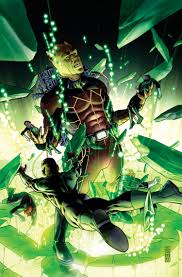 Van Jensen does an excellent job with this issue of making a seamless transition from Green Lantern #24 to Green Lantern Corps #24. The co-plotting with Robert Venditti was most likely a factor in that, but the tone and writing style of Jensen meshes wonderfully with that of Venditti, much like the mighty Johns and Tomasi tag-team. Jensen’s voice for the Corps members is spot on as he nails the worrisome tones of Salaak, the calculating mind of John Stewart, and the naivete of the young recruits. Relic is strong and imposing, and his righteous mission stays its course in this issue. Jensen keeps the dialogue light at all the right points, keeping the issue from feeling like a Lantern bloodbath, but never making a joke of the situation. He walks this fine line very well in the script and the result is a very rewarding read. Rather than being a continuation that is biding time for a big finale, Green Lantern Corps drives Lights Out forward and, just like Green Lantern #24, manages to change the Green Lantern mythos forever. Jensen ends his chapter of the event with very interesting predicaments for the Lanterns, and makes it damn near impossible for readers to not pick up Green Lantern: New Guardians #24.

Bernard Chang owns this issue of Green Lantern Corps. What do I mean by owns? Complete storytelling mastery of his subject matter. This issue is filled with all kinds of construct chaos and Chang manages to use unique layouts and an amazing amount of detail to keep the battle feeling chaotic but also able to read. This issue could have very easily become a visual mess, but Chang’s skillful hand delivers a gem of an issue instead. There are some excellent splash pages in this issue, some great character moments with excellent expression, and some visually impressive giant-characters-smacking-giant-characters and there really isn’t much more that you could ask from Chang in this issue. His style is suits this title very well and he and Jensen seem to be locked in creatively.

Green Lantern Corps #24 is a strong entry in the Lights Out event and is filled with an energy and excitement of the Green Lantern universe being under a new regime. Any awkward feelings of transition are over and done – this is a new age and one damn entertaining crossover book. Give this one a read and I challenge you to not want to continue the event.