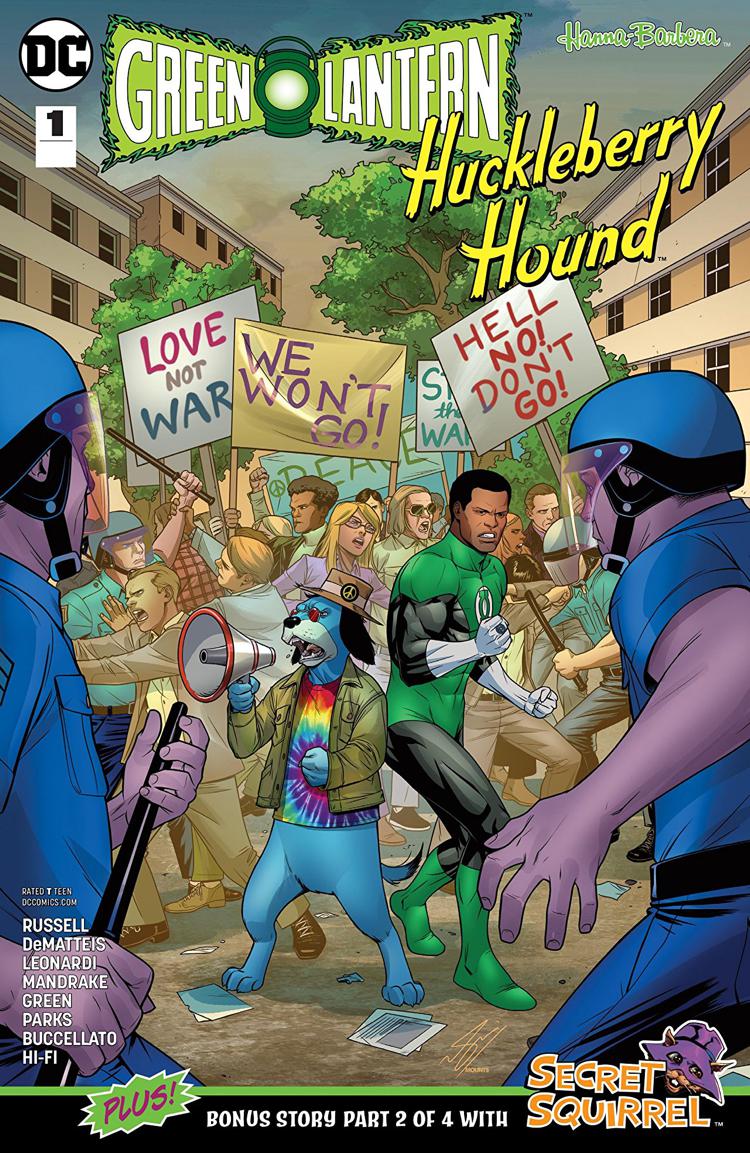 A young John Stewart, still undergoing training, is given a test by Katma Tui, his instructor, to go home and not use his power ring. That’s easier said than done, as Stewart’s home is Detroit in the 1970s, and the cultural context is the ongoing war in Vietnam, racist policing, and the political movements to stop both. Stewart meets up with Huckleberry Hound, a children’s entertainer whose career dried up when he started getting political. John learns an important lesson about the uses and responsibility of power, and he discovers that Katma Tui’s test isn’t what he believed it to be.

John reminisces about his brother to Huckleberry. John’s brother fought in Vietnam and came back a hero, only to be be killed in the course of race riots that broke out shortly after his brother’s coming home party was raided by cops. Huckleberry tells John about the end of his career as a children’s TV host, when he made antiwar jokes on a USO tour, paralleling the downward trajectory of a number of popular entertainers of the 60s and 70s who took controversial anti-war stances. Ultimately, another riot breaks out and John must decide whether to use the power he has for what he believes in, or obey the orders of the more powerful Guardians who’ve told him not to use his ring.

Green Lantern/Huckleberry Hound Special #1 is a profound and subtle meditation on power, approaching the subject from multiple perspectives and angles. The power John gets from his ring to solve or start conflicts, the power of soldiers with weapons, the power of a president to send soldiers to war, the power of police over the policed, but also the power of an entertainer to speak up, and the power of the people to fight back. It’s a well-told, but urgent, message about the importance of using the power we have, no matter how small it may seem, to make the world a better place in whatever way that we can. The capstone, of Nixon being removed from the Oval Office following Watergate, is artfully placed.

The art, throughout, is well-suited to the story, brightly-colored and alien when John is managing crises on distant planets, but gritty and realistic on Earth, whether in the ghettos of Detroit or the jungles of Vietnam. Huckleberry’s cartoon dog visage is expressive and appropriately hang-dog, when called for, but seamlessly merges in with the other, human characters, which helps the reader forget the inherent ridiculousness of the presence (in much the way they can wave away the nonsense of an intergalactic police force powered by scienti-magical rings).

There’s also a Secret Squirrel back-up feature, but I won’t hold that against it.

Green Lantern/Huckleberry Hound Special #1 is another excellent, and unexpected, cartoon crossover from DC, a powerful lesson on history and power in a brightly-colored, entertaining package.