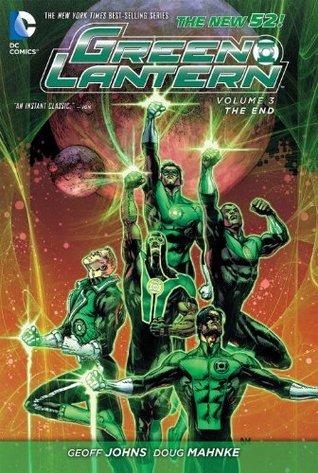 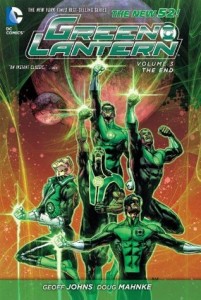 The Green Lantern saga as envisioned by Geoff Johns ends very much as it began, with a rebirth, the rise of a hero redeemed, and two men on opposing sides of a war who, in another life, could have been the best of friends. This is the last stand of Guardians of the Universe, as they face their own soldiers and risk everything to destroy free will in the universe as we know it. And yet, amid the chaos, a new ringbearer arises to defend the world. This may be “The End,” but it’s very much a beginning for Simon Baz, Green Lantern of Sector 2814.

Johns ends his epic run with some very curious choices, almost all of which work splendidly as a coda to a space adventure (and an epic rebuild of a legend) like we hadn’t seen in recent years in the DC Universe. Covering Green Lantern #0 and #13-20, Volume 3 of the New 52 series begins with a very personal story, escalating all the way to grand chaos by the end with the fate of the cosmos at stake. It’s a nice progression, much more readable than the earlier released Rise of the Third Army collection, which jumped around with multiple authors and series to produce a muddled version of Johns’ complete vision. Here, we get a real sense of clarity to the Green Lantern legacy, and can’t help but feel immediately attached to the writer’s newest contribution to the DCU, Simon Baz, a young Muslim-American man who becomes the Green Lantern of Earth once Hal Jordan enters the netherworld of the Black Hand. 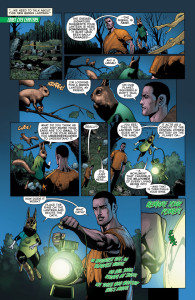 Baz’s immediate interaction with the police and the Justice League reflect the growing pessimism of the inhabitants of our comic book world these days, but his character doesn’t absorb that negativity. Driven by duty to family, and an innate sense of right, Baz is like Jordan in many respects, and one can imagine why Johns felt the need to bring him in — not simply to impact the ethnic and cultural diversity of the DC Universe in a post-911 era — but to be that young, daredevil Lantern now that Jordan has evolved and moved on to what seems like a much more responsible place by the end of this saga. Plus, who can resist the delight of a novice Green Lantern being trained in the ways of the ring by a talking squirrel?

Of course, Jordan is at the center of the remainder of the tale, with the evolution of his relationship with rogue Lantern Sinestro finally coming full circle. It’s been a delight to see these two interact so closely over the course of three volumes, but it’s in the moments when it all falls apart that we get the most genuine sense of their feelings and understanding of each other. These moments, and one particularly merciful one at the end of the tale involving Ganthet, really overshadow the danger our villain, the First Lantern Volthoom, poses. To the degree that it’s a far more interesting premise for the wrap-up of Johns’ entire run, this is an extremely positive result. However, there is something artificial about the way the story ends — less with a bang than a whimper — that makes the threat over the course of 9 issues a tad disappointing. Nevertheless, characterization wins out over action in my case, and just seeing how each member of the various Corps reconciles by the end of this epic run (not to mention has their future “revealed”) is the strongest delight. 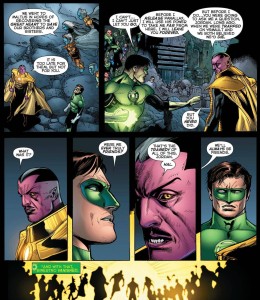 Mahnke’s art dominates this volume, with only rare sections attributed to additional pencillers (although Ardian Syaf’s handling of the chamber of shadows Hal and Sinestro find themselves trapped inside was particularly moody and well-delivered). As always, the line work, even amongst multiple inkers, is solid and renders characters with just enough edge to be threatening, but just enough soulfulness to be human and endearing. Baz’s costume design, highlighted in special pages toward the rear of this volume, is a nice update of the traditional GL costume, striking a great balance between extra line and the simplicity of that fadeaway black we’ve enjoyed since Ethan Van Sciver’s earliest days back on Green Lantern: Rebirth. Mahnke really outdid himself for the finale, a chapter with a whopping 64 pages of art and multiple double page spreads that don’t lose any of the drama or detail we’re used to getting. While many of these remain a bit awkward given the slightly tighter binding of the hardcover format, they are still a delight to turn to as the action crescendos.

A beautiful send-off to Geoff Johns and a brilliant introduction to a new young upstart Lantern, “The End” really encapsulates so much of what the writer’s work on the Green Lantern mythos has been — a wild adventure with huge, dominating villains, but moreso at its core, a show of character strength and growth that I can’t get enough of in my super-hero comics. This volume is highly recommended, but then again, I’d be hard-pressed not to beg anyone to go all the way back to beginning and enjoy it from scratch all over again. I may yet do that myself.