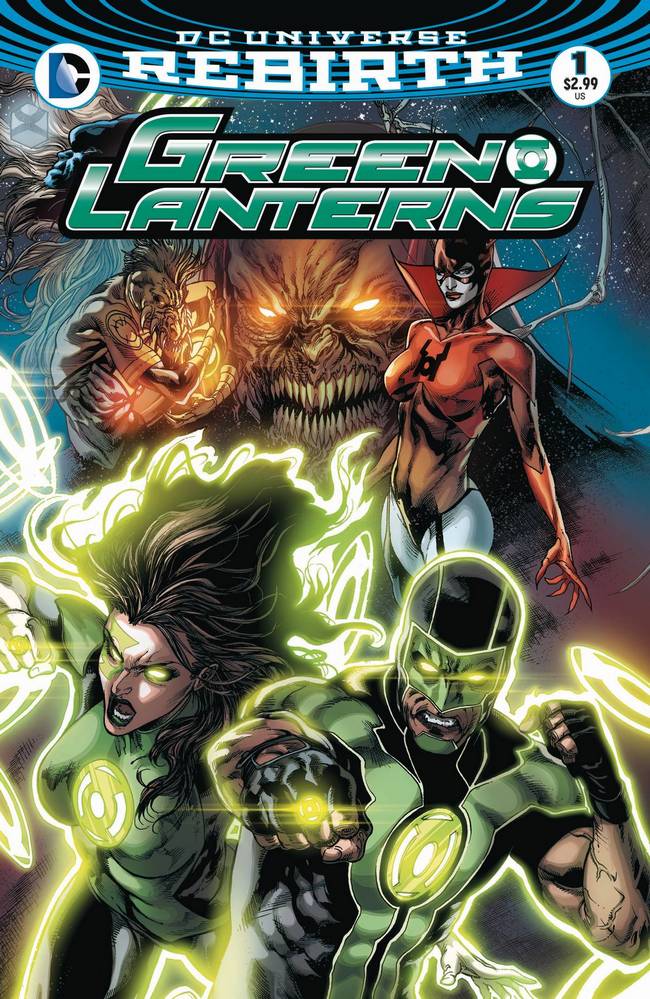 Simon Baz and Jessica Cruz’s partnership gets off to a rocky start as they learn to work together while confronting a threat from the Red Lantern Corps.

Green Lanterns #1 gets the relaunched series off to a promising start following the Rebirth special. Simon and Jessica both answer a call to investigate an unauthorized alien presence on Earth. What should be a simple mission becomes more complicated as they discover an all-too-human serial killer and his pile of bodies in the basement.

I’d like to pause for an aside here. Green Lanterns #1 is being released in the wake of the incomprehensible tragedy in Orlando. I don’t really fault DC for that; comics have lead times and the images here aren’t an exact parallel to the carnage at the Pulse nightclub (particularly in that there’s no real anti-LGBTQ aspect to the deaths depicted in this comic). Nonetheless, I personally had a bit of a tough time reading this comic. There are panels of mangled corpses that made me deeply uneasy, followed by a scene of the various loved ones of the dead trying to gain access to the cordoned-off basement to search for their friends and family among the bodies.

At the same time, I’m glad I read it. I wouldn’t say it was inspiring, but it was definitely thought-provoking. That scene of loved ones at the crime scene makes an interesting point, as their loss turns to rage that makes the situation much worse. As much as this was hard to read, it was resonant and had a purpose beyond gruesomeness for the sake of gruesomeness. For me, it worked, but if Orlando is still raw for you and you don’t feel you can handle this sort of thing right now, it might behoove you to set this comic aside, at least for the time being.

This issue did a fine job setting up the premise for the rest of the series, with Simon and Jessica working together, but often at odds. It also laid the groundwork for the first arc, which involves a Red Lantern plot the dimensions of which are still not entirely clear. It did feel a tad rough around the edges in parts. A lot of the dialog, particularly Simon and Jessica’s bickering, felt on-the-nose, and the plotting erred on the side of abruptness. It was notably jarring when a hellmouth opened up under the murder site, only for the Green Lanterns to just leave when A.R.G.U.S. arrived. We shoot from Hell on Earth straight to Jessica grocery shopping and Simon sitting down to family dinner.

Awkward transitions aside, the creators fit a lot of plot and character moments into their alloted twenty pages, and by the end we’re comfortably settled in for an interesting Green Lantern story. This is not a series that’s trying to take the Green Lanterns in a bold new direction; instead, like much of Rebirth, it’s an attempt to bring the Lanterns back to what worked in the past, and what worked, in this case, is the Geoff Johns Green Lanterns. There’s cosmic lore involving a lost Guardian and some sort of super ring, the promise of grotesque aliens and epic battles, and a core focus on who the Lanterns are as people and what their personal struggles mean to the larger story.

The art, by Robson Rocha, Jay Leisten, and Blond continues in the vein seen in Rebirth (though without some of the awkward posing of the lady characters). Rocha does a great job staging complex action scenes and selling the visual aspect of fights. His figures are in keeping with the style established by Van Sciver in both 2005’s Green Lantern Rebirth and two weeks ago’s Green Lanterns Rebirth: realistic and detailed musculature, somewhat exaggerated posing, elaborately designed and meticulously on-model aliens. Blonde’s colors are appropriately luminescent, especially where the light constructs and piping on the costumes is concerned.

Green Lanterns #1 is a solid start to the series. It’s an invigorating, if slightly rough-around-the-edges, return to form for the title and holds a lot of promise for the future.