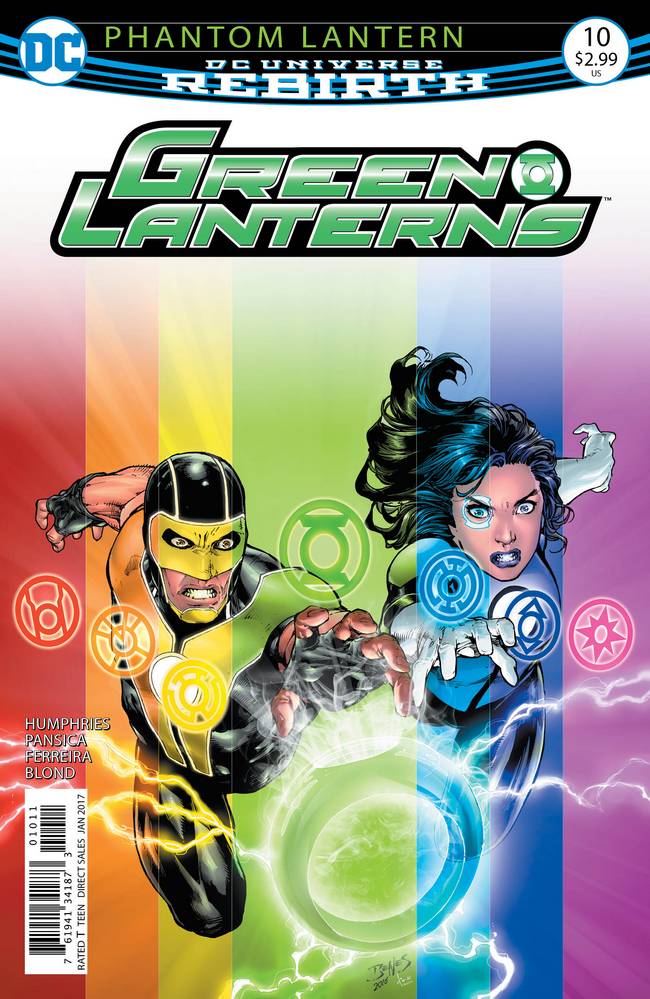 The Phantom Ring is on the loose! Will Simon Baz and Jessica Cruz be able to stop it from falling into the wrong hands?

Frank Laminski, whom we met in the last issue of Green Lanterns, continues his quest for the Phantom Ring, while Simon and Jessica are pressed into service putting out a house fire. Frank’s quest doesn’t come without a price, though, and his mysterious benefactor grows ever more sinister.

This series finally feels like it’s really clicking. This issue has a lot of great character moments with Jessica and Simon and we finally, after ten issues of build-up, see the Phantom Ring in action. The issue moves seamlessly back and forth between characters and plotlines in a way that makes sense, and everyone’s dialogue feels natural; fun, without being overly-quippy.

The two spotlight characters for this issue are Jessica and Frank. There’s an interesting contrast between these two; Frank wants a ring, but doesn’t deserve it, while Jessica deserves a ring, but doesn’t want it. We see this demonstrated in both word and deed. Jessica agonizes over her inability to properly control her ring and make a construct, but uses her own familiarity with fear to home in on a lost girl’s hiding place in the middle of a burning building, then is able to talk the girl into coming with her to safety by empathizing with her terror and teaching her to overcome it. We then get a charming moment toward the end of the issue where the rescued girl finds a new role model in Jessica. It’s cute and heart-warming.

By contrast, we see Frank sociopathically tearing through anyone and anything in his quest to obtain the Phantom Ring. This includes murder, both direct and attempted. Frank is so obsessed with getting a ring, any ring, that he’s destroyed his life and others’, and at no point has a moment of self-reflection about whether he deserves a ring or about what makes someone ring-worthy. The contrast with Jessica, who is self-reflective to a fault, is glaring.

Pansica’s pencils are detailed and expressive. The art does an excellent job depicting the action, though it feels, at times, excessively posed. Jessica, in particular, is occasionally put in some awkward positions that, while not glaringly gross, do raise a bit of an eyebrow. Still, the constructs are detailed, the monsters are terrifying, the characters have warmth and life, so it’s difficult to find too much fault. Blond’s colors are fantastic, giving constructs an ethereal glow and everything else a soft, pastel patina. The color work is rich and bright, as a Green Lantern comic should be.

As the second arc of Green Lanterns begins in earnest, this title is really picking up momentum. This is a fantastic issue all-around and a great read for any Green Lantern fan.