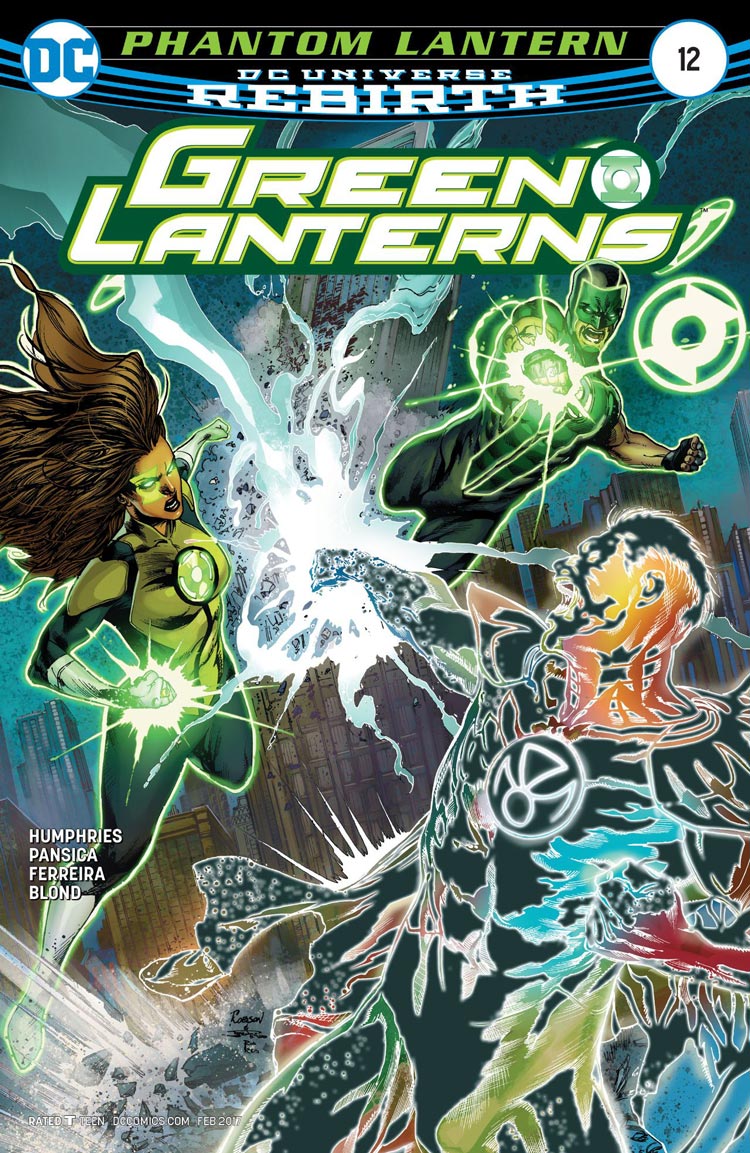 Simon and Jessica continue their fight with the new Phantom Lantern, while questioning whether he’s the real villain of this story.

We pick up where we left off, with the Phantom Lantern, Frank Laminski, activating the Orange aspect of his ring, the color associated with Greed. Simon and Jessica work to minimize the damage he causes as his greed attack tears a building apart, then he has a crisis of conscience which leads him to fly back to his home in Coast City, where the First Lantern, Volthoom, is menacing the exiled Guardian Rami. Simon and Jessica pursue, but stop for a philosophical conversation on the way.

This issue advances the plot only minimally, but gives us some interesting character moments for Frank, Simon, and Jessica. We see Frank’s hero worship of Hal Jordan to the exclusion of all else in his life, leading him to become a mentally unstable adult who lacks all control of his emotions. What’s interesting is that he seems to have set becoming a Green Lantern as his goal in life and put all of his efforts toward the physical aspect of the training, while neglecting the sort of emotional control that is needed to succeed as a Lantern.

This ties into the conversation that Simon and Jessica have mid-book. Simon is dead set on getting the Phantom Ring back, but Jessica has doubts about whether Frank is as bad as they’re assuming he is. It leads to an argument over what it means to be worthy of a ring and how the ring chooses people. Simon and Jessica both express doubts about their motives in wanting to retrieve the Phantom Ring.

Of course, there are a couple of problems with this discussion. First, as Simon eventually points out, Frank has kidnapped Rami and attacked his family (plus, unmentioned, Frank just tore a suburban home apart). Regardless of Frank’s worth as a human being, that seems like a compelling enough reason to at least take his ring away. But Jessica knows that and admits it; her objection to Simon’s enthusiasm is rooted in her own self doubts about her worth as a Lantern.

And that leads to the second, more structural problem with this conversation: It’s pretty much exactly the conversation the two had last issue on this exact subject, but more drawn out and with subtext made text. Character moments are great, but we just had these same character moments two weeks ago, and this issue doesn’t really advance the dialog or alter it in any meaningful way.

Eduardo Pansico’s pencils and Julio Ferreira’s inks are quite well done. In a dialog-heavy issue, Pansico gives all the characters great expressive faces and body language that sells the conversation and keeps the reader engaged. In some ways, though, the art undermines this issue. Jessica’s argument is that Frank’s a normal guy, and is he really so different from her and Simon? The art is a powerful argument for “no, actually, he really is quite different.”

Simon and Jessica are drawn heroically, attractively. Frank is drawn like a monster, from his obsessive eyes while working out to his uncanny valley grin when smiling. Everything about how Frank looks says “this is a dude who is not OK,” which makes it easy to dismiss Jessica’s call not to judge him prematurely. Pansico’s skill in creating that image of Frank, it should be said, is masterful; my only qualm is with whether it ultimately creates dissonance with the narrative.

It almost doesn’t need to be said that Blond’s color work is excellent. Throughout this series, Blond’s work has truly elevated the art. His use of vivid colors for the present and duller, faded colors for memories in this issue greatly enhance the storytelling.

Even when the narrative’s spinning in circles, Green Lanterns is always a gorgeous book to look at. This isn’t a bad issue, per se, but it felt like too much of a repetition of the last issue.