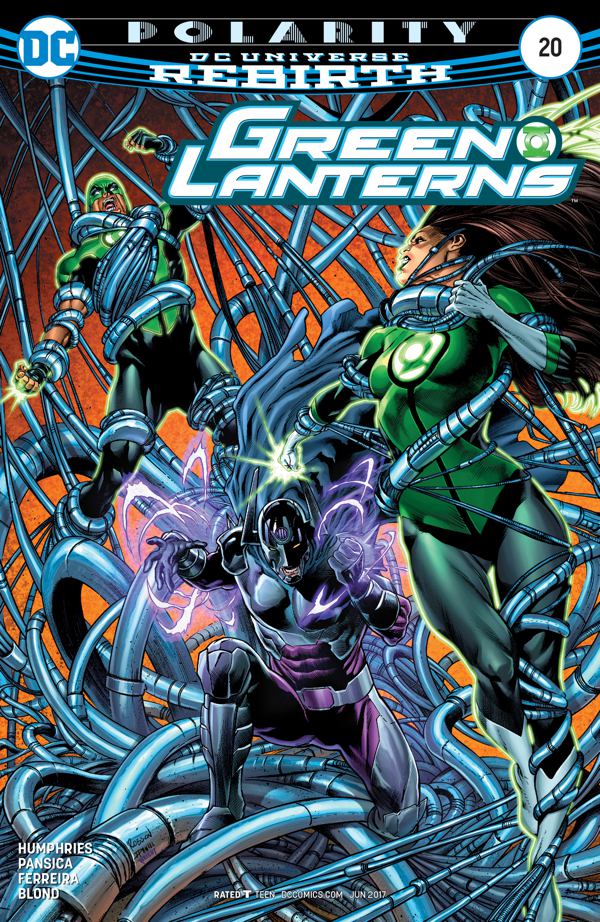 Simon and Jessica continue trying to stop Doctor Polaris, while Polaris is struggling between his warring desires to save his brother or to fully embrace the villainous persona.

The beginning of the issue picks up right where the last one left off: with Simon and Jessica sinking in the ocean, trapped inside a ball of vehicles after a battle with Doctor Polaris. Simon tries to break free, but can’t summon enough willpower to break out of the metallic prison.

Jessica, who has battled anxiety for years, is able to focus and overcome her fear,

summoning enough willpower to break free. Humphries has really given life to Jessica as a character, showing how she struggles with anxiety and how that affects her. She’s had an incredible journey over the course of the series and has been able to get to a place where her anxiety isn’t preventing her from living the life she wants. It’s an incredibly empowering character arc, and this moment really shows how far she’s come.

The next scene shows the Doctor Polaris costume talking to Neal Emerson, his human form, and provides some of his backstory. Emerson was a brilliant scientist who could have cured cancer, but he was discredited and no one took his work seriously. His powers came as a side effect of working with experimental magnets for such a long period of time. His brother, Seth, appears, offering words of encouragement. Seth is trying to convince Neal to save him, while Doctor Polaris wants him to put on the costume and show everyone how powerful he really is. The scene emphasizes how conflicted Neal feels and how important both his brother and his public identity are to him.

Simon and Jessica are unable to find Polaris or his brother at the hospital, so they contact Cyborg for help in triangulating his location. There’s a flashback to Simon’s criminal days with his best friend Nazir, showing them stealing cars and attempting to sell them. Simon’s having a particularly difficult time with this mission because it reminds him of how he felt when Nazir was in a coma. The similarities between the two situations makes Simon question whether they’re doing the right thing by tracking down Polaris, or if they might be putting his brother at risk for the sake of stopping the villain.

In another flashback, Emerson is being bombarded by the press, who are relentless. Seth arrives and helps him in into a car, offering Neal his support and a place to stay. This scene demonstrates what an important support system Seth was to Neal and continues to draw the parallels between his situation and Simon’s.

There’s a brief scene on Mogo, where several Green Lanterns are discussing the new Earth Lanterns and the situation with the exiled Guardian, Rami. The Lanterns learn who Rami is and John Stewart gives the order to bring in Simon, Jessica, and Rami. While the scene doesn’t connect to the Polaris story, it continues the storyline of the last arc and sets up for the next conflict Simon and Jessica will have to face.

Back on Earth, Simon and Jessica have finally tracked down Neal Emerson. They find Seth and a costumed Doctor Polaris. He’s angry about being discredited and wants to prove that he’s not a joke by showing how powerful he is. The fighting stops when Seth flatlines, and the three are horror-stricken. The reactions are incredibly detailed, especially Emerson’s, and the moment emphasizes that the three characters have a common goal in keeping Seth alive, but very different methods of achieving that.

Humphries does a great job laying out Neal Emerson’s backstory and giving us a clear understanding of his motives and actions. Even though he’s Doctor Polaris and has battled the Green Lanterns, he’s not presented as a mustache-twirling villain. He’s genuinely torn between trying to save his brother and proving his worth, and that conflict is fully established through the use of the flashback and the dream sequence.

There were a lot of different scenes, flashbacks, dream sequences, and a brief visit to space, but the issue never felt confusing or like it was juggling too many plot threads. Most of the issue was dedicated to furthering the Polaris storyline, with just a brief scene indicating what’s to come. There was a clear indication of when and where each scene took place, and the flashbacks were especially necessary to explain character motivations.

The first page layout is incredible: a mostly black page, with a small circle containing Simon and Jessica. Pansica conveys the confinement and claustrophobia of the situation by using such a small portion of the page. The use of one big panel and several smaller panels on the next two pages emphasizes the intensity of the situation and the urgency to escape. Pansica uses these smaller panels to focus on Simon’s hands and constructs, and on Jessica’s face as she summons her willpower, which increases the drama and intensity of the scene.

The full page reveal of Doctor Polaris after he decides to put the costume back on is extremely detailed. Polaris is surrounded by metal objects and debris, from the room, emphasizing how powerful that makes Polaris and the range of objects he can manipulate. Pansica has Polaris take up the full page, fully establishing his presence and power.

When Simon and Jessica are confined in the ball of vehicles, the colors are all blacks and greens and browns. Blond uses the bright green of their rings to illuminate Simon and Jessica’s faces. The colors emphasize the claustrophobic feeling, and the fact that their rings are the only way they could get out. The colors during Simon’s flashback are muted and green, giving the pages a dream-like quality and visually separating the scene from the events of the present.

The issue deepens the conflict between the Lanterns and Doctor Polaris, expanding on Doctor Polaris’s motivations and showing the internal conflict Simon feels working this mission.The brief scene on Mogo provides a tease of what’s to come and where the story will be heading.