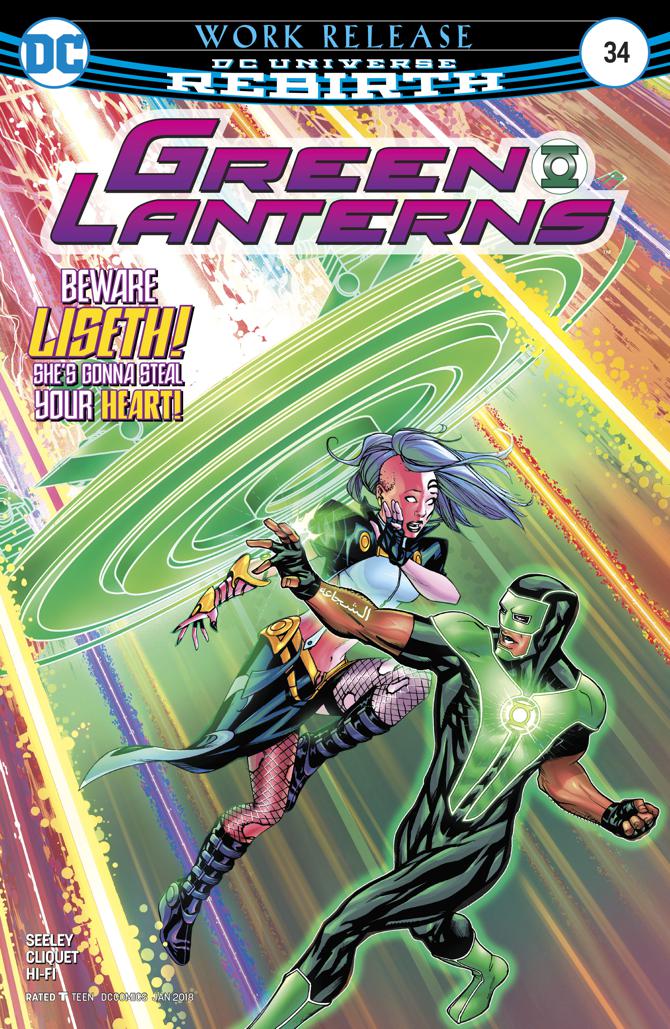 Simon and Jessica struggle to rescue the population of a collapsing planet while also finding new jobs in their real-life identities!

This issue opens where the last left off, with Jessica Cruz struggling to keep the planet Mol from collapsing before she can convince the native population to evacuate while Simon tries to save the life of the daughter of the commodore commanding the evacuation ship. These scenes are intercut to flashbacks of Simon and Jessica’s parallel job searches, with Jessica looking for waitressing work while Simon seeks to join a racing pit crew.

This issue, Seeley’s second on the title and the conclusion of his first plotline, makes interesting use of flashbacks to accentuate themes in the present. Jessica is placed in the kitchen at the diner she’s applying at because the owner is concerned she can’t handle the stress or human contact of a front-of-house waitressing job. That lack of confidence in her social skills comes to a head when Jessica is called upon to convince the Molians that they should evacuate in defiance of the religious interpretation they have of the planet’s collapse.

Simon, meanwhile, is denied employment because the race team’s owner doesn’t feel the team can trust him, or that he can be a seamless part of the team, given his criminal record and background. He nonetheless works well under intense time pressure to ferry the Molians to safety using, in a cheeky touch, a construct that looks like race cars on a track. The issue serves as an interesting commentary on the absurdity of the job interview process. Jessica and Simon are both more than capable of handling the work, but are denied jobs and positions based on assumptions about their background rather than their demonstrated skills.

That said, the plotting of this issue is a bit ham-handed; in the space of a page, Jessica converts the entire population of Mol away from a death cult and convinces them to save themselves, and does so with a speech that’s so half-assed that Simon even points out how corny it is. Lampshading weak writing is fine, but what’s even better is not leaving the weak writing in at all. If the Molian death cult was going to be dealt with in such an underwhelming fashion, it raises the question why it was included to begin with. It sort of serves to demonstrate that Jessica has more social skills than she’s given credit for, but falls into the trap of telling-rather-than-showing. Indeed, we’re told “this speech was bad, but it worked, so whatever,” almost like it was a placeholder for a much better speech that never got written.

There are, however, a lot of promising threads dangled for future stories, including political machinations on Abin Sur’s home planet Ungara, Simon moving to a new home off of Earth, Jessica’s ring developing its own personality, and the return of Bolphunga the Unrelenting next issue. Simon and Jessica’s characterization also feels pitch-perfect, which is a relief. Sam Humphries had thirty-three issues to establish Jessica and Simon’s voices, and these first isssues under Seeley form a seamless transition.

The art is up to the usual high standards for this series, with expressive faces, dynamic panelling, and creative constructs. Green Lanterns is always a visual treat and the art here does a great job illustrating both planet-destroying science fiction action and the wrenching feeling of being told that you’re not qualified for a position. The color work is bright, in keeping with the usual standards for Green Lantern comics, but at times a little confusing; it took a bit to realize that the commodore’s daughter is a different color than the other Ungarans, and that there’s an important transition from one color to the othr to half-and-half that’s difficult to pick up as-is.

Green Lanterns #34 has its rough patches, but it’s a promising start to the next era of the title.