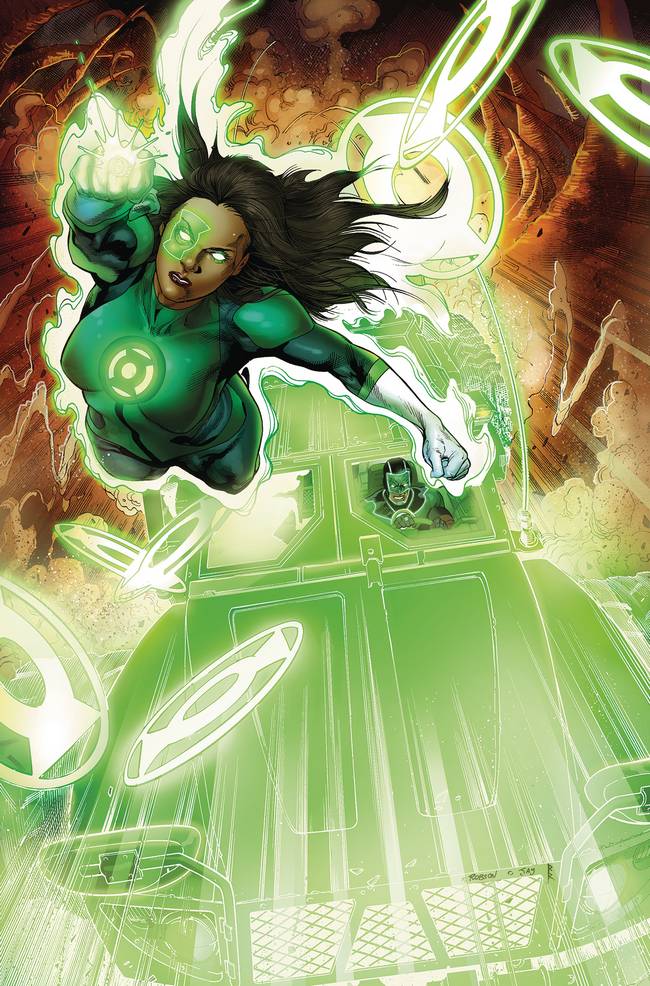 Everything comes to a head as Rage Planet reaches its conclusion! Will Jessica Cruz overcome her fears in time to save Simon Baz and the world?

With Simon Baz literally in Atrocitus’s grip, Jessica Cruz struggles against her own anxiety to try to find the willpower to make a ring construct and save the day. Meanwhile, a mysterious renegade Guardian reveals a secret new weapon.

The emotional heart of this issues is Jessica’s grappling with her anxiety. It’s been the centerpiece of her story since the first issue and it finally comes to a head in this one. It’s an interesting spin on an old Green Lantern formula; Green Lanterns are usually pitched as being without fear, when actually their main qualification is their ability to overcome fear. In Jessica’s case, overcoming fear takes the form of finding the courage to leave her apartment, to reconnect to her sister, to interact with others in public. She carries an unusually heavy burden of fear, which means seemingly everyday tasks require herculean courage.

That focus on Jessica is the strongest part of the issue. At this point, Simon feels a bit thinly written. So far, he has a collection of quirks and an interesting family, but it’s not clear what his struggle is yet. Hopefully that will be explored in future issues, but for now his role is to run interference for Jessica while she learns to wield her ring.

The story here is well-paced, with a good balance of action, emotion, character development, and laying the ground for future plotlines. The dialogue can sometimes feel a bit over-written and quippy, and the jokes don’t always land, but the budding partner relationship between Simon and Jessica is well-developed and provides a good foundation for the book moving forward.

Conrad and Herbert’s art is skilled, if a bit bland. They do a fine job rendering alien creatures and hellish landscapes, but their faces feel a bit lifeless and dead-behind-the-eyes. They do, however, avoid some of the unfortunate posing pitfalls that befell earlier issues in this series, with Jessica in particular not adopting uncharacteristically prurient body positions. Blond’s coloring is well-executed, suitably colorful and luminescent when it comes to constructs, with palettes that shift with location to give a sense of place.

In total, Green Lanterns #6 is a perfectly serviceable end to the series’ first arc. It establishes a good dynamic between Simon and Jessica going forward, has some nice character moments, and sets up the next arc well.