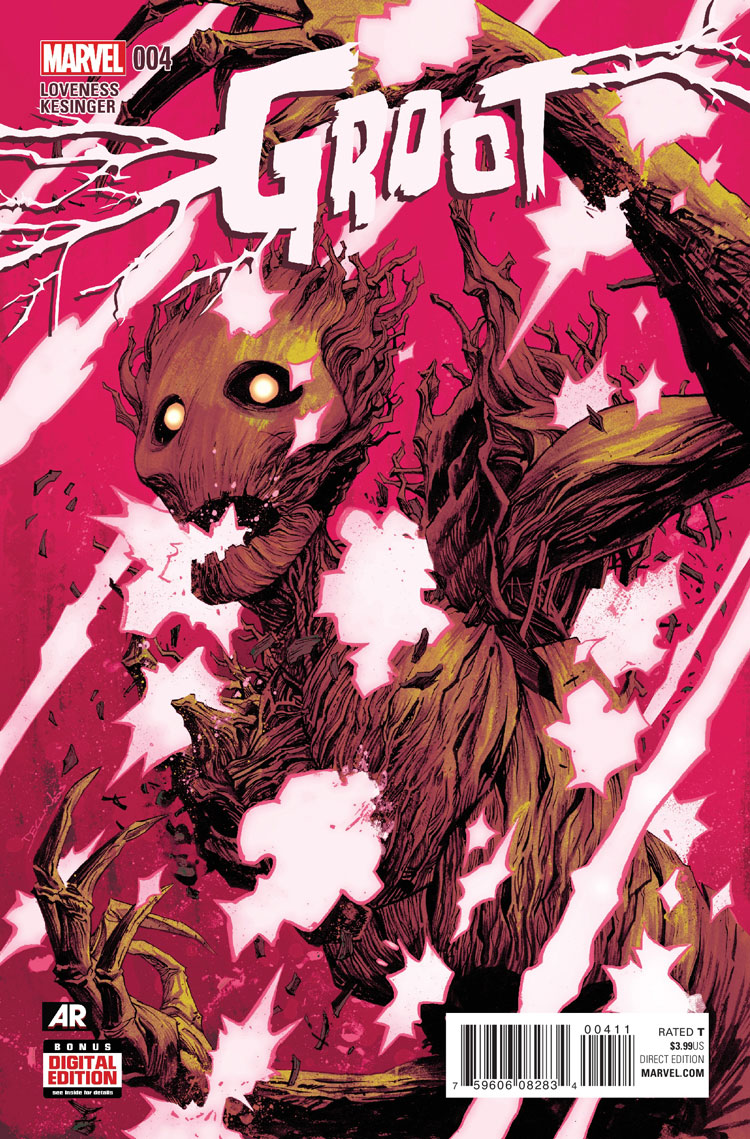 Welcome to Earfk! While Rocket is in the hands of a rather patient “super” villain, Groot and Mantron batten down the hatches as some rather inept but friendly Skrulls invade the wrong domain. Groot works his magic and hitches another ride through the stars, meeting yet another cosmic being contemplating life.

With his ragtag group of interstellar pals, Groot mounts a rescue mission, only for him to be blown to splinters. But, worry not, because as Raccoon reminds us: Groot grows fast. Before long, our little sapling is onto the next chapter in his adventure.

Groot captures a sense of innocence and adventure that’s missing from many mainstream comics, and this issue is the shining example. While Marvel does have the more sunny edge over DC, Groot seems to stand out in the way the series captures a feeling of joy. Series like Unbeatable Squirrel Girl and Ms. Marvel create a similar feeling to Groot, in that we get to explore the characters in new and jovial ways.

Jeff Loveness does some excellent character development and exploration of Groot through Rocket. We’ve seen Groot travel through space and make new friends, and Rocket points out that, well, that’s what our giant talking tree friend tends to do. This issue is powerful, fleshing out a character who only speaks three words in a way that is warm and evocative. Loveness providing an intimate look into Groot’s inner world is one of this issue’s spectacular moments.

Brian Kessinger does a wonderful job of conveying so many different creatures in the universe. Some things are more rough and gritty, while others are vibrant and ethereal. From the interstellar backdrop to the individual characters, Kessinger combines so many different elements to create a picture that is playful, colorful. The art matches the overall tone of the issue, from the lighthearted jokes to the issue’s more dire and serious conclusion.

The addition of Numinus in this issue is, quite literally, stellar. I love that she reads as a woman of color, especially given her apparent role in the Marvel universe. She seems to have had some hand in many major events, from the Fantastic Four and Peter Parker gaining their powers to the tragedies of losing Jean Grey and Gwen Stacy. While her lament is rather heartbreaking, it’s nice to see another important woman of color in Marvel, even if her last appearance was in 1989 in Power Pack #51.

There is one really spectacular page that captures so many things that are right about the Marvel Universe. As Numinus laments the tapestry she seemed to help weave in the 616, Groot communicates to her that, despite tragedy, there are some amazing people and heroes on Earth. In the image we capture heroes of color like Kamala, Miles, and Sam. We see Kyle get married to Northstar, Alicia show her love for Ben Grimm. There’s Sue and Reed, caring for their kids, and Jane Foster is front and center as Thor.

Brian Kesinger captures in one image, one simple and graphic ‘I AM GROOT’, what I and many other readers are looking for in comics. There’s representation of disability, race, religion, women, and sexual orientation, and it’s all used to demonstrate the positive parts of the Marvel comics. Quite frankly, I found this page so powerful I’m fighting back tears writing about it. If I could have one image to represent what I want out of the future of Marvel and other comic companies, this would be it (with the inclusion of trans and nonbinary characters).

After reading this issue, I immediately thought of ways to use it in my clinical work. Groot looking for the best in people is something that I think many clients may need in order to work through depression or challenge social anxiety. This issue of Groot, and the series overall, can be a helpful way to explore how to elicit positive emotions, manage a sense of grief or regret, and how to look for the best in ourselves or others. For this reason alone, I recommend this issue.