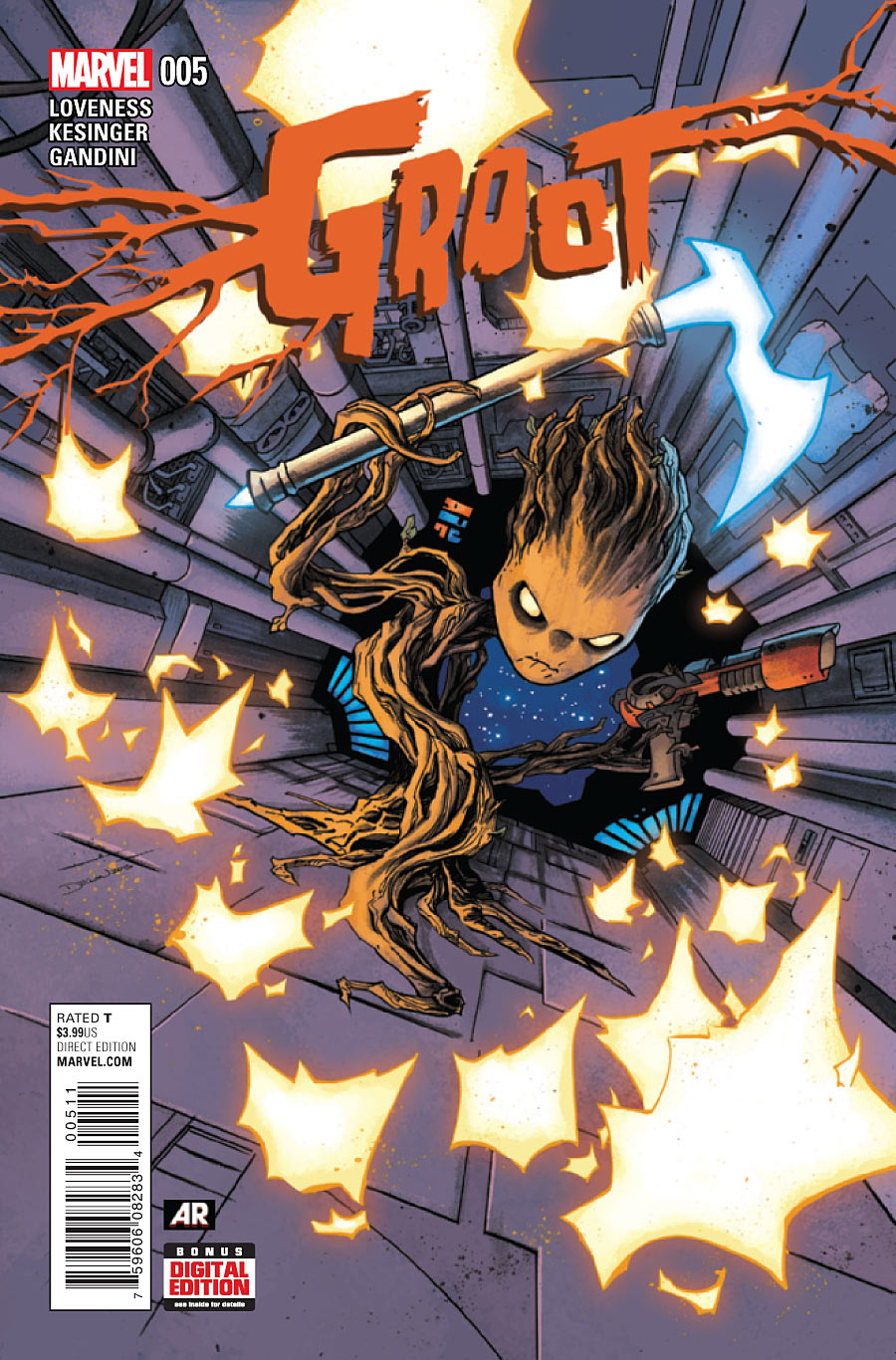 Can we say: Battle Ready Groot?

Groot may be a sapling, but he launches a heroic rescue mission for his interstellar friends. Let’s just say there are some slight mishaps and there’s a Super Skrull involved. Groot shows off his ingenuity and his friends escape captivity, as we reach a heartbreaking climax for Mantron and Rocket keeps Groot from acting too out of character. As these literally star-crossed friends make their departure, and Numinus grants A.P.E. a valuable gift regarding Mantron, Rocket and Groot head to Earth for the next part of their adventure.

I cannot tell you enough how much I’ve enjoyed this series. Jeff Loveness writes an excellent crew of characters and brings in so much enjoyable silliness, yet never missing a beat with the serious background of the story. The entire story has been so carefree and lively, even considering that Groot is saving his friends from an intergalactic pirate. I love how Loveness showcased a more serious and aggressive Groot in this issue without sacrificing the character’s loving and compassionate roots (see what I did there?).

The art is lovely in this issue. Some characters are gritty, some wacky, other luminous. Brian Kesinger and Vero Gandhi convey distinct and important aspects of each character, which I think contributes to Groot’s adventure in the series. He essentially brought together so many different characters, and while they may seem odd initially, they all use their unique abilities to save each other and Groot.

One of my FAVORITE parts of this issue was the bond between A.P.E. and Mantron. Let’s just say I call their connection a “Queer Robot Relationship” in my mind. While it had a somewhat tragic element, it was beautiful to see. Their union reminds me of the relationship between Gems on Steven Universe, particularly Ruby and Sapphire’s bond. A.P.E. and Mantron were a nice and refreshing touch, leading to some interesting (head)canon for me.

Groot is a series I recommend to people because it is so vibrant. I enjoy seeing a joyous sense of adventure, even in serious moments. I also love that Groot is great for kids. They likely recognize our friendly neighborhood tree and his not-a-raccoon best friend, but through this issue and the series overall they can be introduced to Numinus or the Skrulls, which can lead them toward a lifelong love and exploration of comics.

If I haven’t said it before, I feel that Groot captures many of the things that comics get right. While delving into more serious stories is important, we also need something lighthearted and fun. Groot has been a great ride and issue #5 was yet another excellent adventure.