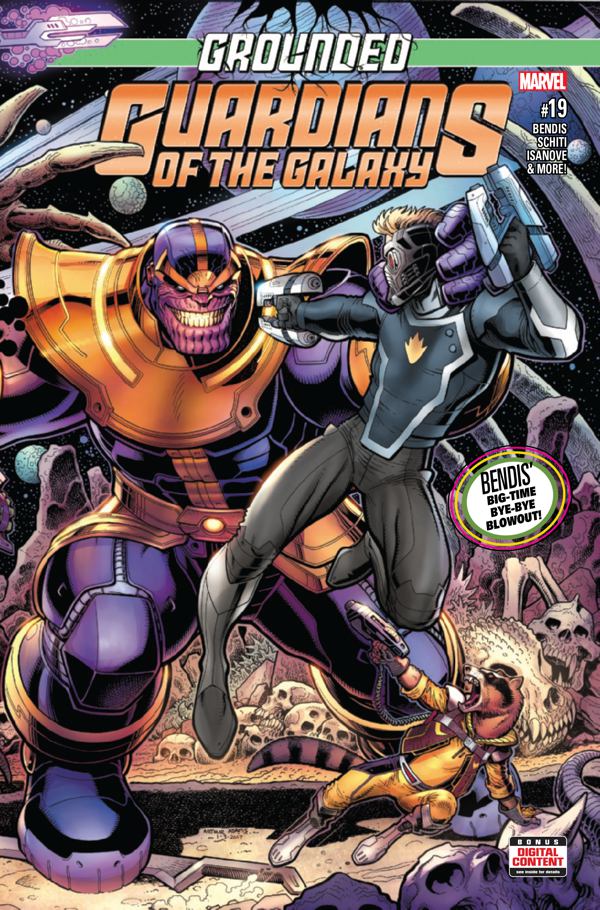 What began with a power launch in the pages of Avengers Assemble in 2012 comes to a close with Guardians of the Galaxy #19. With a cover callout proclaiming his exodus, writer Brian Michael Bendis takes his leave of Peter Quill and his band of spacefaring companions. Naturally, such a celebrated conclusion can only end one way, right?

Yeah, Thanos makes his appearance. He’s mostly a punching bag for the Guardians and the target of derision from other galactic forces, but at its core, Bendis’ finale is the Guardians of the Galaxy versus Thanos – one more time.

Unfortunately, the fight isn’t as epic or decisive as the stunning stable of artistic contributors deserves, but with the second feature film mere weeks away and a relaunch of the Guardians comic slated just prior to that, the mediocre story can cash in the passes readers have been saving through this whole run.

Guardians of the Galaxy #19 raps Bendis’ work, clears the decks, and gives the next creative team a chance to ignore or build on what has happened here.

As for the most impressive part of this issue, enough cannot be said for the collection of artists present. Bendis’ story meanders enough so that artistic luminaries like Ed McGuinness, Arthur Adams, and Kevin Maguire can contribute scenes of Guardians (individually or in smaller-then-total-team collections) giving Thanos the what-for. Adams in particular hits all the sweet spots, providing a wraparound cover featuring the core team of Star-Lord, Rocket Raccoon, Gamora, Drax, and Groot then he delivers the centerfold to the issue with a poster-worthy image of Groot, Star-Lord, and Venom piling on the Mad Titan.

With such a dynamic roster of artists filling out this issue, consistency in quality is not a concern, but consistency in design and character appearances is, as Groot goes between hippy tree and bark beast, Quill apparently has a retractable beard, and Gamora changes outfits. Like I said, though, these are excusable and totally understandable, given the talent captured by these staples.

The ending of this issue, and the series(es) is lackluster, more whimper than bang, but Bendis does get a chance to highlight his contributions to the Guardians of the Galaxy brand – Ben Grimm, Kitty Pryde, Angela, and Carol Danvers. It’s nice to see the Guardians latched into the larger Marvel Universe. That said, I just don’t see the need to come back to this segment of the Guardians history at this point, like I regularly go back to re-read the 2008 series from Abnett and Lanning. The team is, essentially, the same as they were when Bendis picked them up in 2012. They have a few more friends, and aren’t as confined to the stellar settings, but that’s about it. It’s nice to draw this to a close, but with the artists on hand, I almost think I would have preferred Bendis writing captions for a pin-up issue.