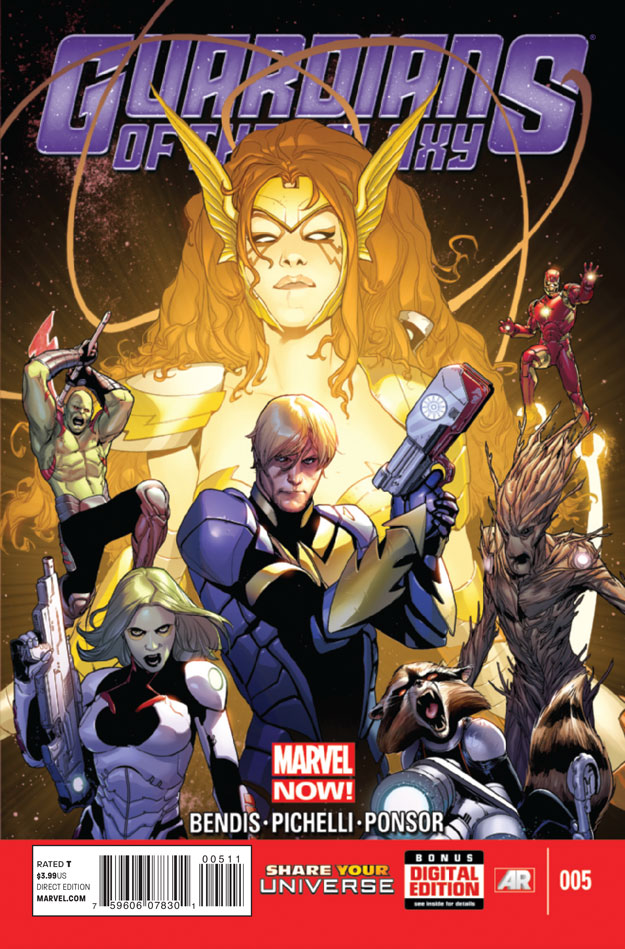 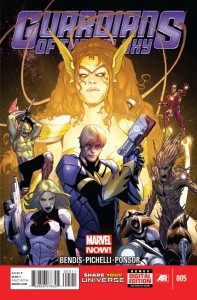 As the heroes and villains of the Marvel Universe deal with the fallout of Age of Ultron, the tears in reality lead to the appearance of a new, highly anticipated character in the 616: Angela, formerly of the Spawn comics, and a creation of Todd MacFarlane and prolific writer Neil Gaiman. As an introduction to that character, I found this issue to be a bit of a let-down. As a GotG issue, it was still a fun romp, mostly because it has me excited for what comes next.

The strengths of Guardians of the Galaxy, usually, are the character moments and the fast pace. This issue is the first one to be so closely tied in to events elsewhere in the Marvel Universe, and I think that made the story a little less cohesive. It felt like a few different narratives tacked together. Bendis still delivers some great moments – space babe moon fight, Rocket and Tony banter, and of course life advice from the Mad Titan. Really, the book is worth the cover price just for Rocket Raccoon condescending to Tony Stark. Somehow this book manages to make the genius-billionaire-playboy-philanthropist the everyman, and that role reversal is a refreshing, interesting take on Tony Stark. He’s clearly there to find something more out of life, and I appreciate that along the way he’s somewhat humbled. Another fantastic scene plays out on the very last page of the book, and I give mad kudos to Bendis for making me say, out loud, “Man, Thanos has a point.”

Sara Pichelli’s art has been and continues to be fantastic. She does small, intimate scenes as well as large, grand space battles. I love how she does facial expressions, especially Tony’s and Gamora’s. She has a gift for capturing very particular emotions perfectly – Gamora’s disgust, Tony’s embarrassment or bewilderment, Peter Quill’s desperation – and it pulls you further into the story. She also makes Groot (my personal favorite) absolutely adorable.

This issue had two major flaws for me. The first is a Groot deficit. He’s in one panel, napping. The second is Angela. I know nothing about her except that she’s an angel, and apparently a hunter, from another dimension. The first three panels we see her in, including the double splash page that starts the story, I don’t really get that vibe because the visual focus is her gigantic, nearly exposed boobs. I have no issue with sexy super-ladies. I prefer my Wonder Woman without pants and my Power Girl with a (reasonably sized) boob window. But, Angela’s look feels a little gross to me. Something is off. I will note that recently, Red Sonja #1 managed to sell me on a ridiculous metal bikini. I got to know Sonja really well within the issue, and the costume fit her personality. I came away from GotG #5 severely unimpressed with Angela partly because I learned nothing about her. She says nothing. She does nothing, save fight Gamora. Now, Bendis is a fantastic storyteller, so I’m completely aware that I’ll likely get more in the next issue. Hopefully Angela will end up with less of a straight-male-gaze feel to her. But for now, she’s just a pin-up, and I’m hoping Gamora spreads her entrails across the Sea of Tranquility.

Overall, this is still a good issue, but it was my least favorite of the run so far. The various storylines felt thrown together for the sake of a tie-in, and Angela really didn’t live up to the hype. I expected much more from a character created by Neil Gaiman. Perhaps it was just too big an introduction for an issue with so many other things going on.  On the plus side, a lot of chess pieces are on the board, and it is clear to me that some really cool things are about to happen. Take this issue for what it is – a transition – and buckle in for issue 6.