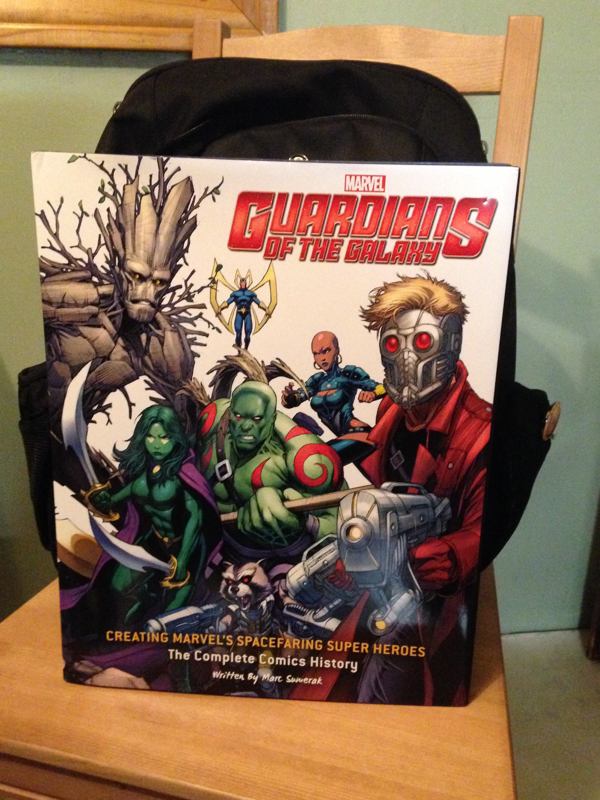 Disclaimer: Insight Editions recently sent us a copy of Guardians of the Galaxy: Creating Marvel’s Spacefaring Super Heroes: The Complete Comics History expressly for the purposes of review. This is that review.

Few things in comics give me greater joy than the creations sprung from the mind of Arnold Drake: the Doom Patrol, Deadman, Stanley and His Monster, and, yes, the Guardians of the Galaxy. As a point of clarification, the team lodged in the public awareness – Star-Lord, Gamora, Drax, Rocket, and Groot – have little to do with Drake, save for the name. Most of these characters were created after Drake’s heyday, but Dan Abnett and Andy Lanning brought them together under the Guardians of the Galaxy brand. Well, and Keith Giffen and Timothy Green II – the latter two via the event of Annihilation, which preceded and precipitated the Abnett and Lanning Guardians.

The point is, the Guardians started with Drake, but since 1969 the brand has grown and changed, sometimes celebrating its roots, other times, simply brandishing the name and seemingly ignoring its own history. Appropriately enough, writer Marc Sumerak starts his Guardians of the Galaxy: Creating Marvel’s Spacefaring Super Heroes: The Complete Comics History coffee table book from Insight Editions at the beginning, identifying the origins of the brand.

When I call this a “coffee table book,” I don’t mean it’s a chic tome for you to decorate your coffee table with, I mean it can double as a coffee table. It’s a hefty read, clocking in at 180-plus pages and most likely capable of cutting off the circulation in a grown adult’s legs if left in a lap for reading. This isn’t the kind of book you’re going to throw into a backpack to read on the evening bus ride home, break out at the beach, or pull out of the glove box while you wait for the kids to finish soccer practice.

Guardians of the Galaxy: Creating Marvel’s Spacefaring Super Heroes: The Complete Comics History is a destination and a reward. And also a candidate for the longest title of 2017.

The book’s size comes from its raison d’êtere – this is an art book, celebrating the visual wonder provided by the Guardians of the Galaxy brand. Sumerak does a nice job with the text, matching the imagery, tracking the history, and peppering this book with quotes from comic creators who have spent time working on one version of the Guardians or another. The book supplies some nice insight and opinion from Dan Abnett, Andy Lanning, Valerio Schiti, Andy Schmidt, Michael Gallagher, Kevin West, Al Milgrom, Bill Rosemann, and Tom DeFalco among others. All of those names are integral to shepherding the Guardians of the Galaxy in one form or another. Sumerak does a wonderful job of cross-examining each era, as Abnett’s quotes are readily applied to the Drake-Gene Colan origins of the Guardians as well as to Abnett’s own work.

Unfortunately, this is also where the biggest gap stands out. Guardians of the Galaxy: Creating Marvel’s Spacefaring Super Heroes: The Complete Comics History lacks interviews with some of the most important (or at least prolific) architects of Guardians brand: Brian Michael Bendis and Jim Valentino (I can let the absence of Arnold Drake quotes off easy, after all, interviewing Arnold Drake right now is a bit of a metaphysical challenge). For as much focus as Sumerak gives (and let’s face it, pop culture demands he do so) to the Guardians that Bendis has until so recently written, it’s odd that no quotes are attributed to Bendis, as half of this book is directly related to Bendis’ work from 2012.

The other noteworthy mention is that all of the imagery in this book is finished, save logos, lettering, or trade dress. There are no concept sketches, unfinished pencils or notes. The text goes into Rosemann contacting Marko Djurdjevic for some character redesigns, but Guardians of the Galaxy: Creating Marvel’s Spacefaring Super Heroes: The Complete Comics History doesn’t present any of Djurdjevic’s concept art, which is easily found.

While Guardians of the Galaxy: Creating Marvel’s Spacefaring Super Heroes: The Complete Comics History may not seem as in-depth as some of the TwoMorrows pieces, it makes up for with dazzling imagery. This is not intended to be a historical reference. It’s an art book. Therefore, it’s fine that the Knowhere Corps (Moondragon, Mantis, Bug, Cosmo, and Prism), Guardians 3000, and Guardians of Infinity are all barely more than footnotes. It’s OK that Arnold Drake isn’t quoted espousing why Charlie-27 had to be from Jupiter. Focus instead on some of the amazing art that stems from these characters. All of which (minus a few pieces) is reproduced in brilliant, vivid color, and much of which is reproduced for the first time ever in a size larger than its original.

Heavily focused on the consumer-friendly Guardians, Guardians of the Galaxy: Creating Marvel’s Spacefaring Super Heroes: The Complete Comics History is a fun exploration of a widely imaginative Marvel property. Readers familiar with only Peter Quill and his teammates will find plenty to like here, and fans of any (and every) iteration will find themselves immersed in the pages of this book for countless hours. It’s got a hefty pricetag, but Insight Editions has assembled a sturdy package, and Marc Sumerak has ensured plenty of great information and imagery for all of us Guardians of the Galaxy fanatics.