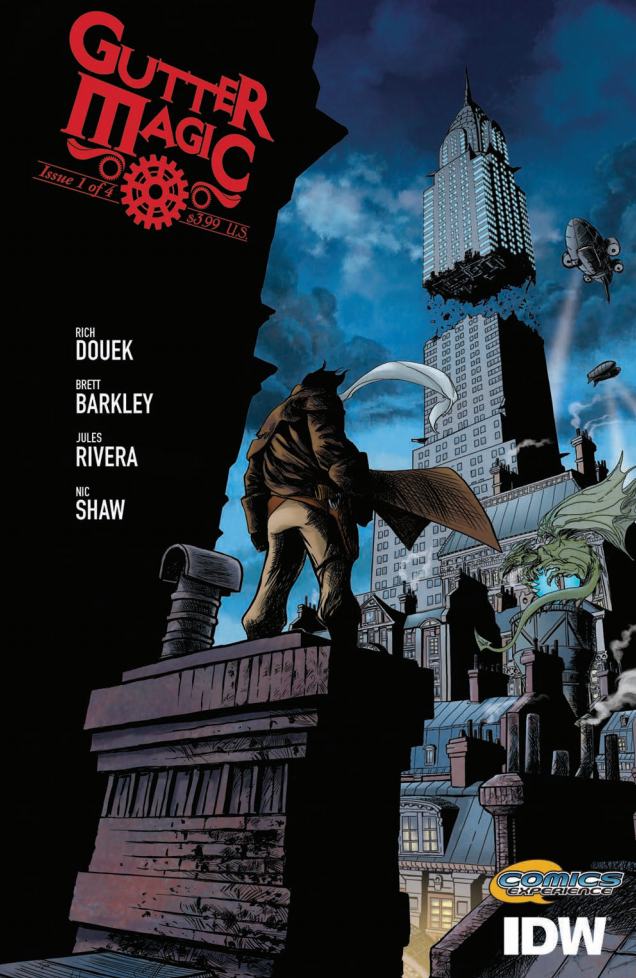 Scraps of magic linger in the streets while Mages and Wizards look down from their towers of power in the fantastical Gutter Magic.

Rich Douek throws readers into the middle of an ongoing story with this script, and his writing builds this world nicely. I dig fantastical tales, and Gutter Magic has some great elements to it. There’s a scoundrel with a quest, his shady but likable Goblin sidekick, all-powerful magi who wield magic and what seems to be a magical mafia. The lead character feels like a mix of Harry Dresden and Indiana Jones, a guy who is good with quips and has a slick pistol but also has a knack for getting himself into trouble. He’s got no magic but he’s neck deep into a quest to get some and while we don’t know much about him, his quest, or this world, Douek made me root for him by the end of the issue. There’s an element of “little guy vs. the big bad empire” it’s always fun to see a troublemaker take down the establishment. Cinder is a scoundrel with enough charm to make me want to know more about his quest, and Douek building this world around him is enough to get me to read issue #2.

The pencils don’t hurt my cause to return, either. Brett Barkley’s work is consistent throughout, with moments of really strong work. When magic is flying he’s at his best, but his pencils do not flounder in the less action packed panels either. The main character may look a bit generic at points, but the moments his look has the right elements of steampunk Han Solo to work. In some ways, the pencil work reminded me of Brent Anderson’s work on Astro City, so I felt very comfortable in this fantastical world, which was nice. The colour work by Jules Rivera is bold and strong, and her work with Cinder’s gun, in particular, stuck with me. Magic really dances off the page because of her work and she gives this comic a great tone with her strong work.

Gutter Magic #1 is an impressive debut that has a lot to accomplish. It had to build a brand new world while making me care about a new character I have no tie to and hook me with an adventure in just 1 issue. It did, and that’s impressive. Douek, Barkley and Rivera have a solid fantasy adventure comic here with Gutter Magic #1 and if you enjoy The Autumnlands, Steampunk worlds or a The Dresden Files, I’d definitely recommend you check this out.