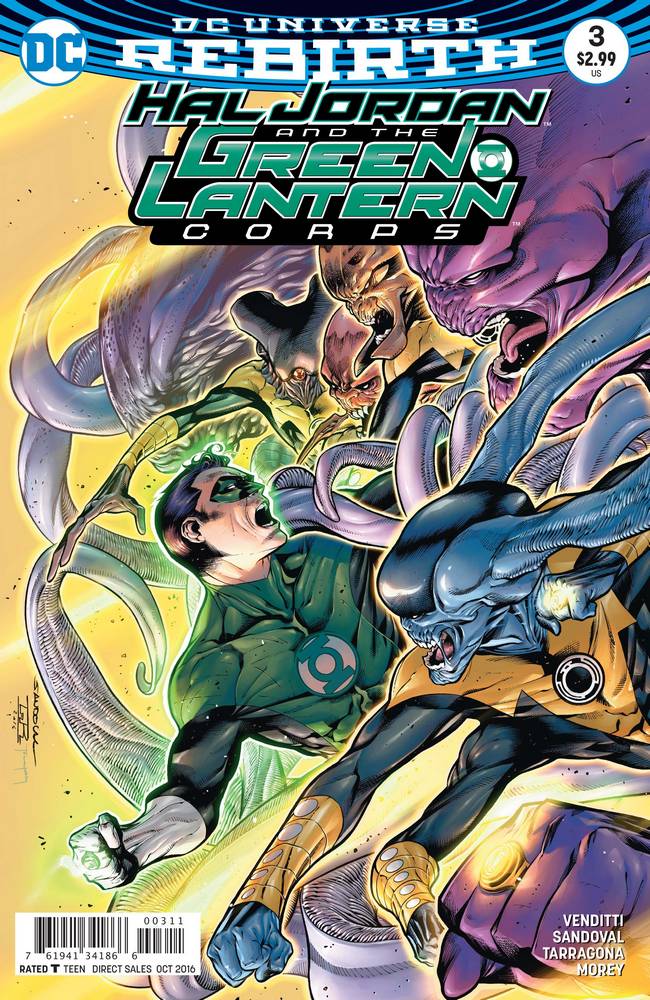 Hal Jordan is pushed to the brink in his fight against the Sinestro Corps. As his confrontation with Sinestro himself looms, will he go too far?

After brief check-ins to see what’s going on with the Corps, Guy, and Sinestro, this issue focuses on Hal Jordan fighting an army of Sinestro Corps soldiers. The Sinestro plot has the most intriguing development, foreshadowing a new galactic faction that may rise to prominence now that the Sinestro Corps are the universe’s space cops.

The heart of this issue, though, is Hal Jordan fighting to save a group of innocent civilians on the planet Chall’Enn, victims of Sinestro’s order to instill great fear throughout the galaxy. Hal learns that the Sinestro Corps is kidnapping innocents indiscriminately to feed to a mysterious Fear Engine that is now hypercharging the Corps’ fear-based rings. After a mighty struggle, Hal himself succumbs to the overwhelming force levied against him.

There’s good character-based storytelling in the midst of this shouted-exposition heavy fight. Hal Jordan’s first priority is rescuing the kidnapping victims, and he winds up being captured while fighting to rescue a child. Hal is cocksure, but always focused on protecting civilians even as the odds steadily mount against him.

The battle itself is exciting and gorgeously drawn. Sandoval and Tarragona, as ever, produce dynamic and action-packed art for this book. The book is laden with splash pages and inset panels that effectively draw the reader into the action, to the point where it’s almost overwhelming. The action compels you to move through the issue quickly, but when you slow down and drink in the comic panel-by-panel you find innumerable small details and astounding complexity. The movement from panel to panel is seamless enough that you’re never confused about what’s happening, but rich enough in detail to support a close viewing that luxuriates in the tiniest details.

Morey’s coloring, as always, is perfect. Greens, yellows, and purples predominate, and the dynamic color variance from pastel to neon makes the art sing. Hal Jordan and the Green Lantern Corps consistently has some of the best colors on the stand.

Hal Jordan and the Green Lantern Corps has a curious running-in-place quality. Every issue is packed with action, but the plot seemingly doesn’t advance much. Still, by the third issue (the fourth if you count the Rebirth special), the book finally seems to be getting to some interesting places. Where previous issues left me frustrated, this one left me intrigued. I’m interested to learn more about the Sacrement, and I’m excited to see Hal finally meet up with Sinestro.

Hal Jordan and the Green Lantern Corps is wide-screen action at its best. The plot may take a bit of a back seat, but sometimes that isn’t the worst thing in the world. If you go in looking for gorgeous art and non-stop action, you won’t be disappointed.