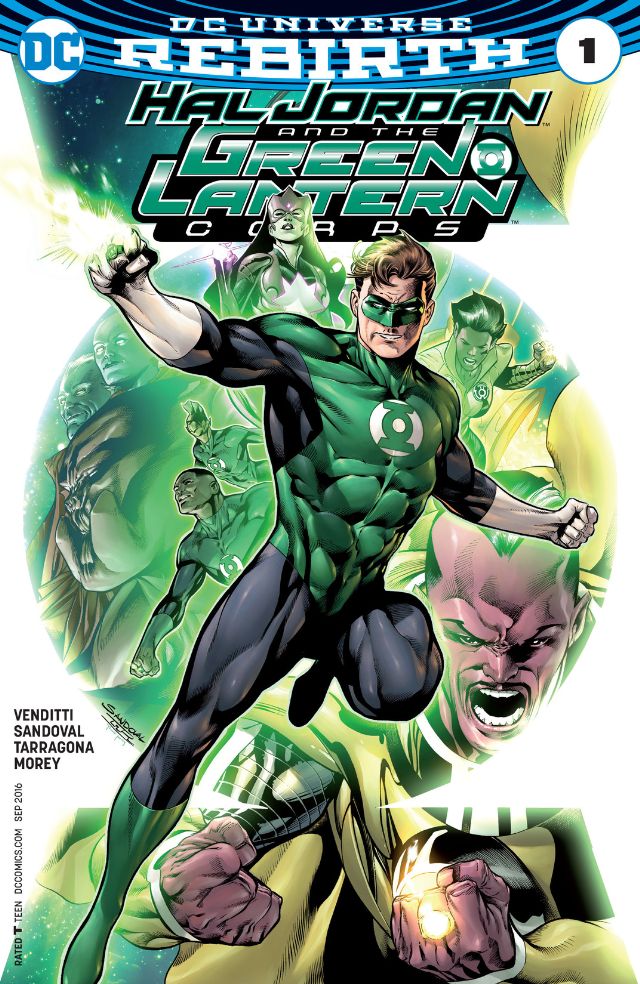 Hal Jordan and the Green Lantern Corps #1 picks up where the Rebirth special left off, with Hal investigating the disappearance of the Green Lantern Corps on the edge of the galaxy. Meanwhile, Sinestro solves his apparent problem with premature aging and embarks on a new campaign to spread fear throughout the universe, while Soranik Natu has grave doubts about the direction of the Sinestro Corps.

This issue is briskly paced and engaging, telling the beginning of what could be a compelling story. There’s an interesting conflict set up between Sinestro, his daughter Soranik, and his adviser Lyssa that shows a lot of potential going forward, and it’s inter-cut with a fun encounter between Hal Jordan and some smugglers that features great action. All told, a fine first issue.

There is a creeping issue, though, that’s emblematic of a lot of the less comfortable aspects of the new Rebirth books, and it centers around the baffling “Sinestro is old now” plot. As of two months ago, in Sinestro #23, the series’ final issue, Sinestro was as youthful and healthy as he’s ever been portrayed in comics.

After taking last month off, he returned in the Hal Jordan: Rebirth special as a frail old man. Evidently, it’s been a tough month for Sinestro. In this issue, Sinestro approaches Parallax, the fear entity, and pleads for energy to be made young again. The bargain is struck, and Sinestro sends his Corps to spread fear throughout the galaxy, evidently at Parallax’s behest.

What’s going on here? This plot only really makes sense as a means to an end: After several years spent rehabilitating Sinestro and the Sinestro Corps, we’re now returning to their roots as bad guys. How do we make them evil again? Make Sinestro turn himself over to Parallax. Why would he do that? Because only Parallax can make him young again. Why is he old, again? I dunno, Wally West did it. Stop asking so many questions.

We never got any explanation for why Sinestro suddenly got old, but no sooner do we start asking questions than he’s made young again, but in order to get back his youth he had to turn evil. Like a lot of the changes brought on by Rebirth, it makes very little sense in terms of where the characters are coming from, but a lot of sense in terms of where they’re going to: Back to a more familiar status quo. It’s not necessarily even bad, in the big scheme of things, but if you’ve been following these characters it makes for a rough transition.

It’s still an entertaining comic. It still has a lot of promise for future stories. It does what it set out to do, even if it chose a thinly explained and clunky mechanism to do it.

Rafa Sandoval and Jordi Tarragona’s art is exceptional and dynamic throughout. They make use of irregular panels and splash pages to give a real sense of explosive action to the proceedings. Sandoval is particularly good at giant splash pages filled with lots of different species of aliens charging and shouting, a staple of any Green Lantern book.

The inking and coloring are extremely effective together. Tarragon’s inking gives us heavy bordes with softer details, which perfectly complement Tomeu Morey’s muted, but diverse, color palette. We’re somewhat accustomed to bright, neon colors in a Green Lantern book, and they’re certainly present in the various glowing constructs and auras. But Morey also brings softer skin-tones and uniforms and more muted environments to great effect. It all combines for one of the most beautiful-looking books on the shelves right now.

While I find the backslide in Sinestro’s direction a bit disappointing, I did quite enjoy this book. Hal Jordan and the Green Lantern Corps #1 showed plenty of promise going forward, and a delightful glimmer of optimism at the very end. I’m excited to see what comes next.