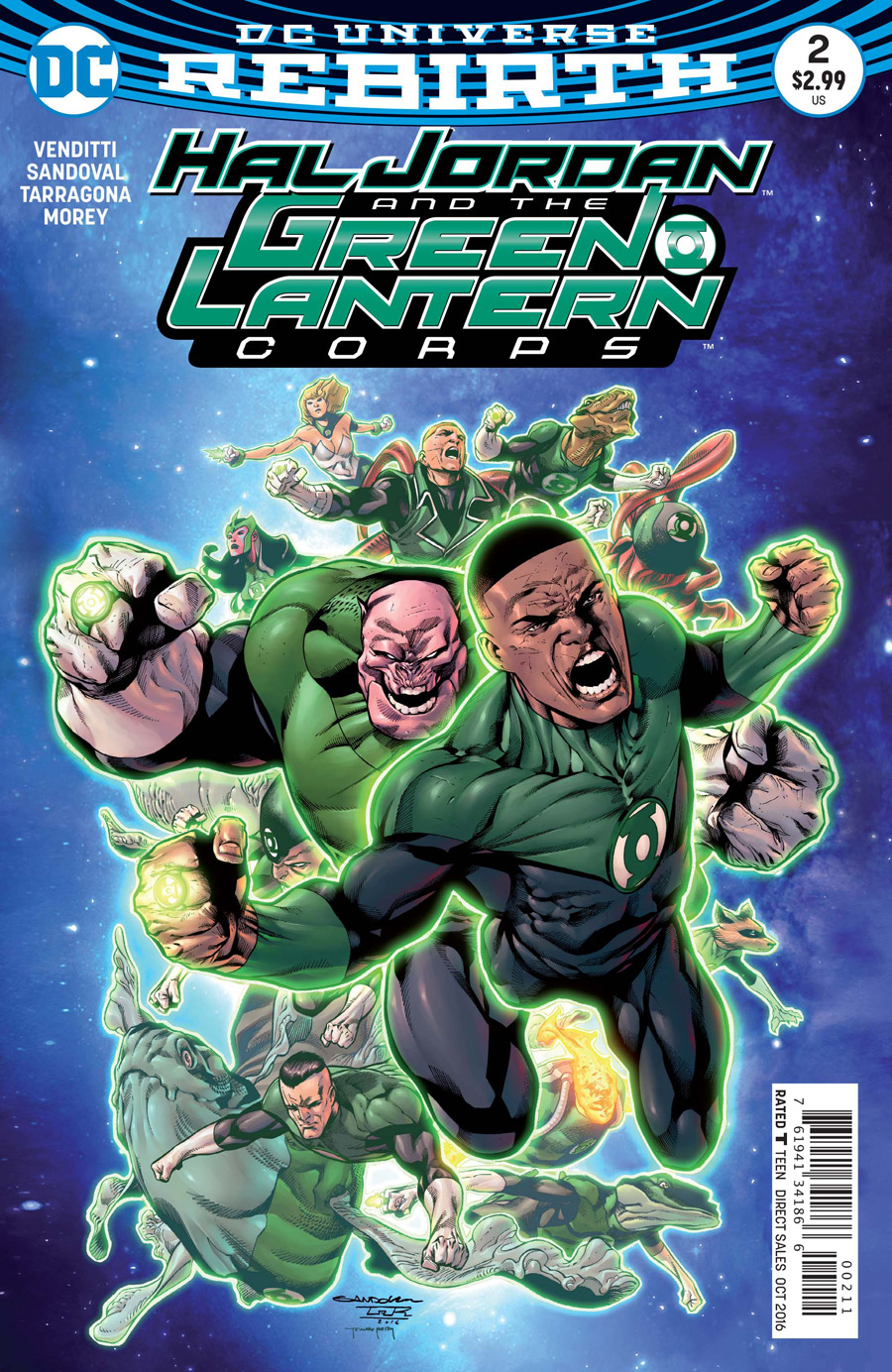 The Sinestro Corps continues its crusade of fear, as an unlikely champion sets out on a quest to bring the Green Lantern Corps back from the edge of oblivion!

Hal Jordan interrogates the Sinestro Corps members he subdued in the last issue, while Sinestro explains why his behavior in his recently-cancelled self-titled comic was all an elaborate ruse. He then lays a trap for Jordan, who gamely falls right into it. Meanwhile, the Green Lantern Corps is attempting to regroup in unknown space and sends Guy Gardner on a reconnaissance mission.

There’s a lot going on in this comic, and there’s also very little going on in this comic. The ball is advanced incrementally forward in three separate plotlines. Pieces are moved around the board, but still show no sign of running into each other any time soon. Hal moves from fighting two members of the Sinestro Corps to another planet where he’ll fight what appear to be six members of the Sinestro Corps.

Sinestro is still bogged down trying to explain to Soranik Natu why his new status quo is so different from where it was immediately before Rebirth. The Green Lantern Corps, having made their grand entrance at the end of the prior issue, are now preparing to search for other characters to hopefully do something.

I really want to like this book. I really want these characters to meet up and do something engaging. So far, though, this book is endless setup, like watching a chess player take twenty minutes to decide to move his king’s pawn to e4.

Certainly, the creative team works hard to create the illusion of something happening. Hal’s plot takes up the lion’s share of pages, most of which are (admittedly gorgeous) splash pages of Hal fighting a pair of characters we’ve never seen before and will never see again. It’s almost enough to make us forget that Hal’s plot is moving from one arbitrary location to another, while Sinestro exposits and the Corps sends Guy on a bold mission in search of a plot.

What’s frustrating about this issue’s ambiance of wheel-spinning is that there are so many good elements that I want to see working together to tell an interesting story. Venditti has a great handle on the characters’ voices. Hal is suitably bombastic, John Stewart is commanding and decisive, Guy is arrogant yet devoted. These characters are having great moments in a vacuum, and I want to fast forward to them meeting up and doing something worth reading.

The art, as always, is a highlight. Hal Jordan and the Green Lantern Corps boasts some of the most breathtaking art on the shelves today. The panel layouts are dynamic and the action practically bursts from the page. The color work, in particular, makes this book stand out; it’s striking at times, yet hauntingly beautiful. The art makes this issue worth a look all on its own.

Hal Jordan and the Green Lantern Corps #2 is a lovely-looking comic without much to say. This book has all the potential in the world to become a great space epic, but for now potential is all it has.