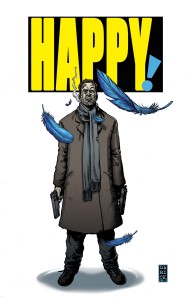 Nick Sax has clearly taken a wrong turn in his life. He was once a decorated police detective, with a beautiful wife and medals piling up on his chest. Now he’s gunning down weird serial killers, mob runners, and getting strapped to a gurney to be interrogated by a torture squad. The world couldn’t be darker for Nick, that is, until an imaginary miniature blue creature with wings, donkey ears, and a unicorn horn shows up to change it all.

Morrison has never been shy about juxtaposing the normal with the fantastic to make a point, even if that point isn’t super clear to the reader. Both The Invisibles and The Filth have taken this same path of showing us a world we recognize all too well and turning it completely upside down, the latter to a very similar effect that we are seeing here. The difference now with Happy! is that the reader is not being introduced to a world that looks much like their own, but rather one that looks like comic book worlds we’re used to reading in 2012. Dark, gritty, bloody and drowned in harsh expletives, Happy! mirrors any number of our funny books today — where heads get lopped off in every other issue (if we’re lucky) and the growing adult marketplace only seems to inspire more of the same. But ever the transformer, Morrison begins here what I hope is a way back from ever more gruesome state comic stories have taken with the introduction of Happy the Horse.

Happy itself has to be seen to be believed. I won’t spoil it here, but Robertson manages to take what could be a My Little Pony and make it feel like it belongs alongside these hard-edged mobsters. Any fans of Robertson’s art on The Boys will find his style equally familiar and impressive, with detail work meriting multiple reads just to absorb every last bit of debris and detritus. In a world where every character seems just a little bit jaundiced, bruised and/or unwashed, having a little buck-toothed, blue furry friend appear in the air might seem a bit jarring. Fortunately, Robertson skillfully finds the balance between disruption and coherence that Morrison’s tale requires.

As this is just part one of four for Morrison’s newest (and first of a new string of, I hear) creator-owned series, it’s difficult to judge on its own merits without knowing for sure where it leads. As pay-off for the writer’s work usually comes in cumulative reading, this issue is very much just a set-up for what is to come. That said, you couldn’t find a more beautiful take on a more dreadful set of scenarios than this first issue of Happy! If this were the last tale told of a dark-and-gritty bygone age, you’d certainly feel like it was paid its due, respectfully and in spades.