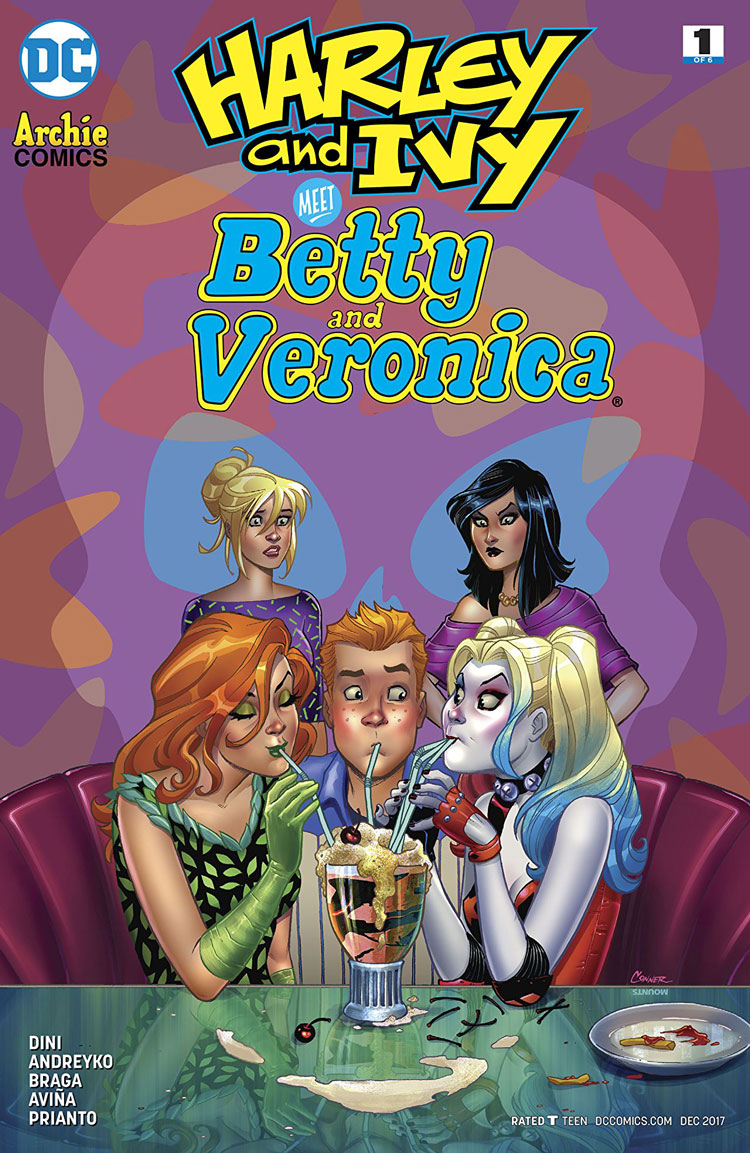 Harley & Ivy Meet Betty & Veronica is the mash-up crossover book of my dreams, and I am beyond elated that it has a chance to exist in the world. This is going to be a fun mini-series, and will certainly be a best-seller in a collected edition for years to come.

There is a huge fan base for both sets of friends, especially with the recent Suicide Squad movie and the success of Riverdale and the rebooted Archie Comics universe. These are two hilarious odd couples that are perfect for a fun crossover mini-series. Thanks to Archie and DC for playing nice and mixing these gals up in a brand new adventure, it’s going to be a wild ride through Gotham and Riverdale with Harley Quinn, Poison Ivy, Betty Cooper, and Veronica Lodge.

In this introductory issue, Veronica’s father, Hiram Lodge, is building a for-profit university in Riverdale, out of the goodness of his own pocketbook. Where do Harley and Ivy come in? Well, Hiram (like some other powerful rich men we know) wants to literally drain the swamp. Ivy isn’t having any of that, and plans to head to Riverdale, dragging Harley along, to stop Hiram Lodge from destroying the plants and wildlife. Harley is surprisingly reluctant, because they might be bringing along some problems from Gotham.

Meanwhile, Archie and friends are planning some fun of their own as Hiram unveils plans for his new university. In a world where Riverdale and Gotham are just a road trip apart, the possibilities for chaos, and hopefully new friendships, are limitless.

This issue was a great introduction to the mini-series. The plot feels like a complete introduction to the basics of the characters and plot, which makes this  great jumping-on point for unfamiliar readers. Someone older, who loves Betty and Veronica, could pick up this book as easily as a new DC fan. The two separate opening sequences, followed by a series of perspective changes and culminating in the stories beginning to truly intertwine, was a solid map for entering this new world of Archie and DC.

As far as the familiar characters, it feels like Dini had a big hand in the portrayal of Harley Quinn in this series. She is more of the cute and manic version of Harley that is prevalent in her original cartoon appearances and in the recent Harley Quinn series by Amanda Conner and Jimmy Palmiotti rather than the darker, more risqué version in Suicide Squad. Hopefully this continues to be the case, to keep this comic available for a younger readership.

It is fun to see the comic play with retro costumes and more modern interpretations of Harley and Ivy, because it brings together so many different iterations of the iconic characters. Their personalities are well-developed, even in this first issue, and their friendship is adorable.

The Archie universe characters are well-written also, though with a larger cast of characters, there will likely need to be a bit more work put in to developing their personalities within the story. Betty and Veronica seem to be primarily rivals in this issue, and the fun aspect of their friendship has not come into play much. Hopefully, more of the Archie gang gets a spotlight as the series continues.

The art is lovely, but it feels disjointed from the book overall, which is disappointing. The panel layouts and thick panel borders are a throwback to Archie digests, which is nice, but the character art left something to be desired. Laura Braga is extremely talented, and her art in DC Bombshells is exquisite.

The Harley & Ivy sequences are the most successful, and her art seems to fit the DC style a bit better than the Archie story lines. Even when Betty and Veronica take on DC personas of their own, it reads as two more DC characters, not Betty and Veronica in costume.

Though the art is beautiful, it didn’t suit this book well, especially in the Archie world. The close-up shots of faces are gorgeous, but the character movements are often static or stiff, which interrupts the flow of the book. Overall, the art reads more as a series of pin-up portraits instead of a sequential story. The women all have very similar shapes and clothes, which often include a lot of midriff and really defined hip bones, which is a fine style, but does not feel connected to the Archie universe.

Some of this can be attributed to the colors, which are also very well-done, but vary from being very intricate and creating detailed, realistic, close-up makeup to more simplistic, undefined group shots. As a whole, this art feels much more DC house style and the Archie world does not adapt well, which interrupts the feeling  of natural coexistence established by the plot.

In future, issues, I hope to see more character interaction, and I’m sure it’s coming. It seems that Dini and Andreyko are setting the girls up for some Monty-Python humor, and possibly a little more identity confusion. It will be interesting, and surely a lot of fun, to see these two mismatched pairs share a universe and enjoy this adventure together. Hopefully, in future issues, the artistic style melds a little better with the individual properties.

If you are a long-time fan of Archie or DC comics, or a new fan looking to jump into a hassle-free mini-series, this is going to be a hilarious story, so jump on board!