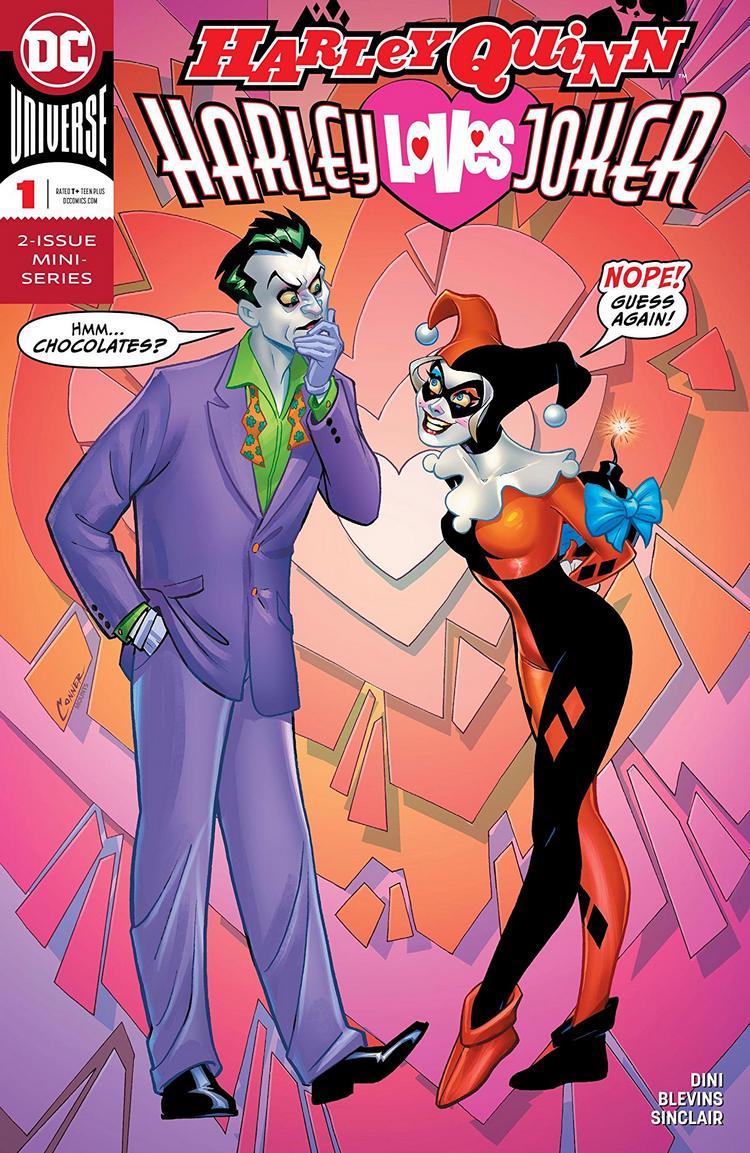 Everyone knows the truth now, that Harley and Joker is not #relationshipgoals and that the true OTP is Harley and Ivy forever. However, if I have to read a story about her being back with that clown, the only person cut out for the job is Paul Dini. This two-issue mini series is a chance for Dini to go back and add to Harley’s history and bring new facets to her character, an honor he certainly deserves. Though some moments fall flat and there might be better Harley stories to tell, this is still a fun romp that calls back to the zany jumpsuited crook Harley plays best.

The story opens on Harley and the Joker’s new hideout, where it’s revealed that Harley still owes millions on the construction or the place will be blown to smithereens! She sets off (thankfully) without the Joker to snag some loot to cover the costs.

It’s fun to see Harley off on her own, prancing and robbing her way to happiness. Some well-appointed camels from the sillier side of Batman’s Rogues Gallery add an extra layer of DC fun to the flashback mini series.

Overall, the story feels a little jumpy. That likely has to do with it being such a short series, but with the Joker and Harley developing their own plots, Harley trying to pay off the house, and a confusing encounter with a new friend and an old enemy, leave the plot feeling disjointed and unfinished. Every page is a version of “and THEN guess what happened?!” That falls flat fairly quickly in the small amount of space the different plot points had to expand in this first issue.

The snippets of Harley’s past we get from this issue are a nod to Harley Quinn fans who will eat up these new facts about their favorite jokester. Some of the other background information though, like the Joker’s involvement in the plot and their new enemy’s true frenemy background, seem overwrought and not fully fleshed-out.

The art certainly fits Dini’s retro Harley vibes, and the colorful palette brings Harley back to her red and black roots. There are some movement sequences and fight scenes that seem muddy rather than dynamic because of the way her gymnastics is portrayed through multiple fading Harleys, but overall it feels fun and fresh.

The colors modernize the book a bit, while still holding onto the stark contrast of Harley’s roots. This is especially evident in the design of the new villain (or is she a villain), as her fur-covered, primarily neutral body provides contrast in fight scenes to Harley’s bright design.

The coloring and pops of fun feed into the lettering design as well, to some success. The colorful SFX and the dynamic placement during Harley’s widespread fight scenes is great, but the diary lettering at the beginning is a big hard to read. Everything fits the style of the book though and complements the feel of this new Harley story.

Hopefully the next part of this issue takes some time to flesh out the plot points that have been introduced in this first issue. The focus seems to be more on a fun Harley romp than an actual story about Harley loving Joker, which was a welcome turn from what I was expecting based on the title. It is worth a read just to get the special glimpse into Dini’s secrets about Harley’s past, but past that it’s just a fun book that serves as a nice aside from the rest of the current DC line.