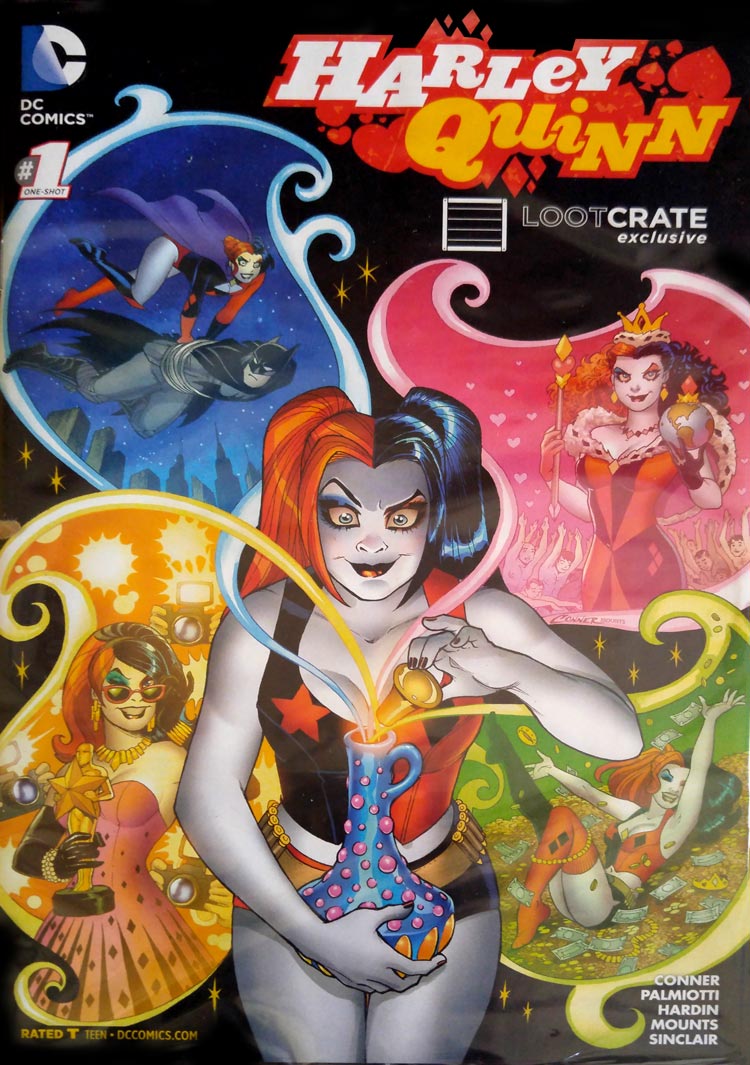 It’s the comic that 500,000 people own, but no one will be able to buy in comic shops. This Harley Quinn #1 is a Loot Crate exclusive book. The original story is included in the March 2016 box for those who ordered or have a subscription to the mystery box delivery service. For those not in the loop, you pay a flat fee and Loot Crate ships you a themed gift box. The catch is that other than the theme, you never know what you are going to get. In this case, it’s an original story by the creative team that is blowing other comic staples away every month in sales.

At this point, if you do not have the box ordered and on the way, the only way to get your hands on it and read it is through third party sellers who are not keeping their copy. With that in mind I thought I’d go ahead and break my own rules, providing a mildly spoiler filled review of this fabulous and now elusive book.

*SPOILER WARNING FROM THIS POINT FORWARD*

From standing up to big business ocean polluters to making the moves on Power Girl, who is rescuing Harley, this issue begins like a best of round-up of Harley stories over the last year. She’s a loud-mouth, foul-mouthed, violent rage monster who is just too adorable and humorous.

It’s during all this action that a genie in a bottle floats its way into her possession. It’s the only drawback of the story, which hinges on this culturally problematic stereotype. Reminiscent of twentieth century assumptions about Middle Eastern religion and culture, you have the genie in the bottle ready to grant Harley’s every wish. This is a clearly the westernized version of the genie that many grew up with in stories like translated versions of 1001 Nights or the animated version of Aladdin.

Unlike those other stories, this is not a genie longing for freedom or resentful of having to follow every direction given. The genie is named Jimm Salabim, similar to the Jonny Quest character, Sim Sim Salabim, or the magic words of early 20th century magician Dante. He is rather proud of his power and enjoys his immortality. Following Harley around, he grants her every wish. The wishes span from the Joker being a nicer guy, to wanting to talk to animals, in typical fashion everything goes chaotically wrong. As with most of Harley’s stories she has a meta-moment where they layout the whole plot of the story before it occurs. So the adventure lies in just how wrong things can possibly get.

For those familiar with the series, Harley tends to give people nicknames. However, she seems unable to stick to one for Jimm, with variations on his name each time she has a new wish. On the surface this comes across as an insensitive move on Harley’s part. What it is doing is playing off another stereotype about the absentminded or culturally ignorant American who cannot bother to learn new things.

The art dynamic between Amanda Conner and Chad Hardin is just smashing. These are two artists whose styles have defined Harley Quinn over the last few years and blend seamlessly together. If it wasn’t for the page credits at the very beginning you would be pressed to know where Conner’s art ends and Hardin’s begins. Hardin’s contributions are to the much talked about references to the quintessential reworking of  Mad Love. In a Bruce Timm fashion, and a wish from Harley, you are transported back to that story. Knowledge of what originally happened in the episode or the comic version is helpful to most readers. However, the creative teams works together to show what originally happened in the story and how Harley’s desires have changed things around.

Color work by Mounts and Sinclair are bright and lively. The gradient shadings combined with larger block shadowing create a lot of depth on the characters throughout the book. Textured backgrounds combined with smaller details by Conner or Hardin help to create a fully realized world. This isn’t some slapped together comic to fulfill a contract. This is the creative team at it’s best. They are looking to show just what Harley Quinn has to offer; bringing more readers into the DCU through this special issue.

By the end of our story Harley’s temper gets the better of her, which results in Jimm being stripped of his powers. Instead of being thankful for being “freed” he is heartbroken about what he has lost. The door has been left open for a return to his story and a chance for him to gain his powers back. In the meantime, Harley makes room for yet another unique character in her vast supporting cast.

While it is disappointing not to have it available digitally, for everyone to read, it is exciting to see DC Comics branching out in this unique fashion. Using one of their strongest and hottest selling properties that will be around after Rebirth shows confidence in this creative team and character. The story is quintessential Harley Quinn. Through irreverent humor, thought provoking ideas are created to challenge how people see the anti-hero.