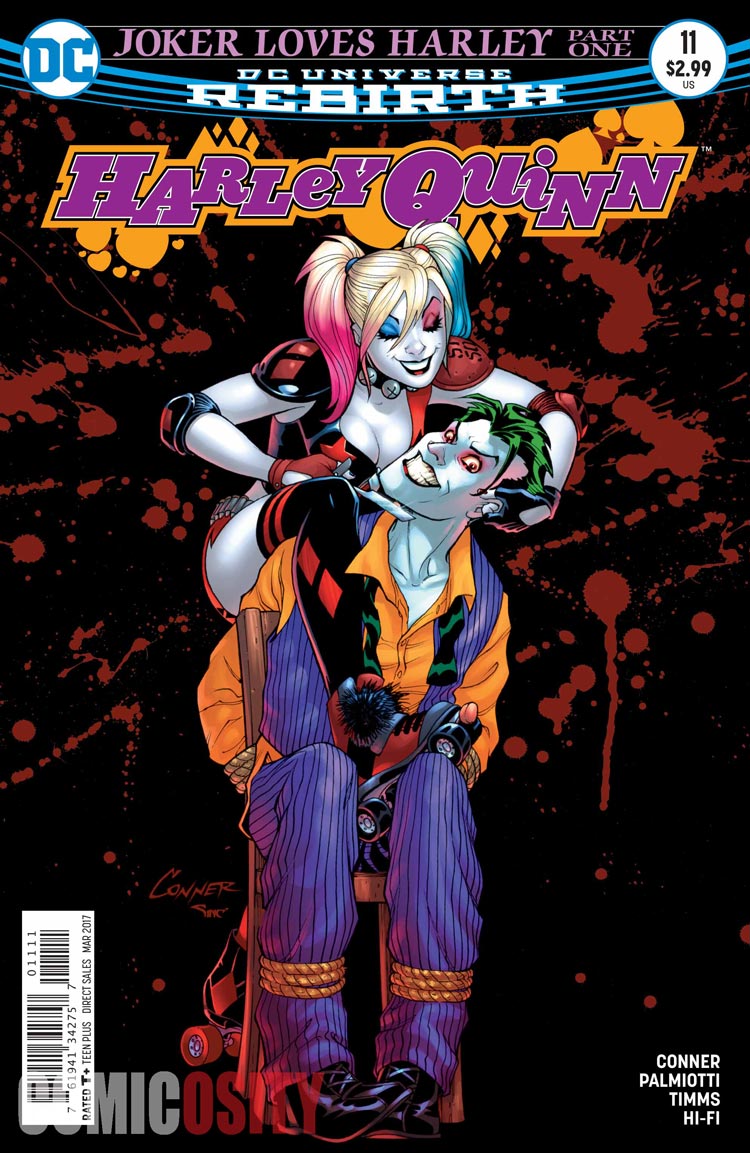 Out of all the various criticisms, taunts, and jeers hurled at the Suicide Squad film this past summer, the one that stuck with me the most was the lamentations at The Joker being introduced to the current cycle of Batman films as nothing more than Harley Quinn’s boyfriend.

In some fans minds’ The Joker is owed pride of place within Batman’s rogues gallery and to them, probably always has. But as he sets foot on Harley’s Coney Island for the first time this issue, it becomes clear that Suicide Squad was the reflection of a dominant reality that was already setting in.

When Harley last tangled with The Joker in their bloody confrontation at Arkham in #25, it was his first major appearance following his amnesiac period brought on by the events of “Endgame.” This, nearly a year later, is his first significant appearance since then. It was, up until somewhere around 2014, conventional wisdom that Harley was unsustainable as a lead character without The Joker. Now, the shoe is on the other foot and The Joker’s utility seems to be limited to acting as Harley’s antagonist.

On the page, he appears just as swaggering and domineering as ever, but on a meta-fictional level the inescapable conclusion is that he’s arrived on Coney Island hat in hand. That transition goes beyond Harley’s rise to reflect a waning interest in The Joker as the most iconic Batman villain in comics even as his star rose in Hollywood.

Looking back at the most iconic Batman comics of the last thirty years, the only Joker centric stories are the poorly aging The Killing Joke and the deeply esoteric Arkham Asylum: A Serious House on Serious Earth. As a result, there’s a gothic, internal decay to the character that serves Palmiotti and Conner’s purposes magnificently without the need to invoke it directly.

Such is the diminished power of The Joker that he isn’t even allowed to tamper with well oiled movements of the Conner-Palmiotti-Timms-Harden engine. He’s been built quietly back up over the last couple issues and that wave crests this issue, but it’s a great big sea.

The mayor also returns to the forefront this issue as he hires on a new assistant who promises to eliminate the city’s homeless after they attempted to occupy his front lawn in protest of inhumane treatment. Harley also follows up on the locked door in the tunnels under her building in a tussle with a monster that sets up the issue’s shocking finale.

What really makes this issue shine from a story standpoint is that instead of returning the tension back to whether or not Harley can resist his overtures, the focus shifts to Red Tool and the latest manifestation of his overbearing Nice Guy tendencies. It’s tempting to look at Red Tool primarily as the Deadpool stand in that he is in this confrontation, but that seems to miss the point of what’s being set up.

Instead of a winking Deadpool versus The Joker match up, Conner and Palmiotti seem to be steering us towards a gender swapped version of some of fiction’s most sexist cliches. Red Tool is stepping into the shoes of the classic damsel in distress who gets in over her head trying to confront the villain on behalf of the hero. If this is the end of the road for him, it’ll be the payoff for the series’ most effective satire yet.

Just as Hardin emerged re-energized and at the peak of his powers with issue #10, Timms shows yet more signs of thriving as a DC exclusive talent. In the opening pages with Harley and The Joker, Timms goes for more sharply, precisely defined figures and faces to heighten the drama, pushing HiFi in turn to fill out the fresh volume his lines deliver.

The definite highlight of the issue for Timms is how he takes ownership of The Joker and gives him a distinct look of his own, sticking to the same beady eyes and lanky frame that Hardin uses, but shifting to emphasize his chin and filling out his nose to be more beak-like in contrast to Hardin’s sometimes Pinocchio like version. The shifting cartooning between the two serves as a subtle and novel reminder of the mercurial, chaotic qualities that Grant Morrison foregrounded for The Joker in Arkham Asylum and his Batman run.

Pandora the Explorer is one of the best working examples of how Conner and Palmiotti can fairly nakedly show us how they’re constructing the current arc without falling into a holding pattern.