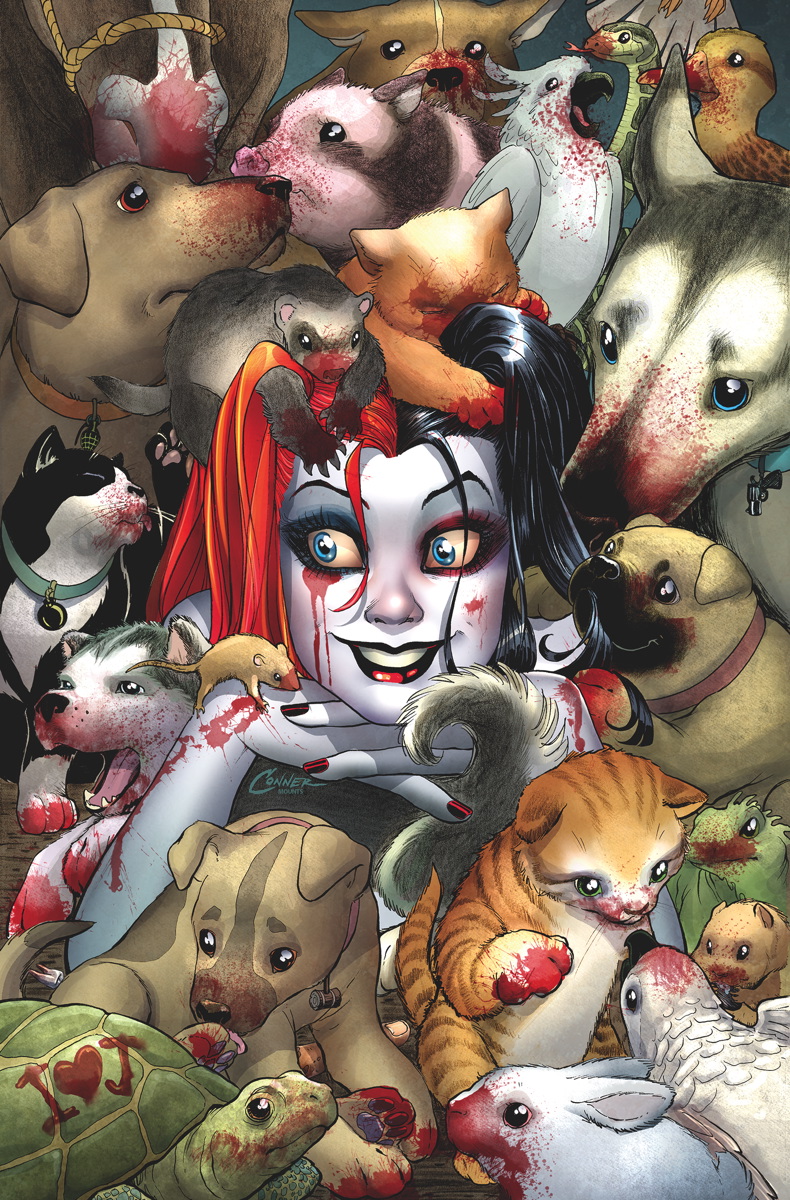 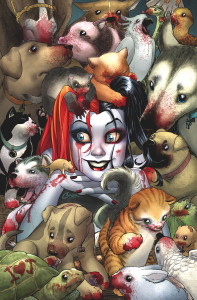 50 dogs and cats ready to be euthanized. A murder wax museum. A stinking corpse in desperate need of refrigeration. And a hitman gunning for our leading lady.

Oh, and a talking stuffed beaver burnt to a crisp.

How exactly is it that mainstream comics are only grim and gritty these days? Because this is literally the funniest comic book I have read in years. And far from simply engaging in slapstick or silly gags, Harley Quinn #2 is desperately smart, endearing, riotous, and exhibits the best of the lead character from start to finish.

It’s an odd story that begins with a full page spread of what I’d call “Old Harley,” i.e. a doting (to a fault) madwoman, humping the wax statue of her Mr. J in the museum that runs out of her new building. Immediately, however, Conner and Palmiotti deliver a Harley Quinn who is independent, whip smart, empathic to those around her, and still doesn’t take herself too seriously. She’s not zany without reason, but quirky (if such a thing applies to a sociopathic serial killer) to an extent that makes her feel almost like a normal human being you’d want to spend a day with. Until she starts talking to her half-burnt stuffed beaver. And it appears to talk back to her. If it weren’t for the murder, I’d want her to be my new BFF.

Dialogue is so perfectly paced throughout, as we’re given a single issue story that not only provides the best rendition of Harley Quinn from even years before the launch of the New 52, but also features Poison Ivy in the role of her best friend. Ivy, of course, has been one of the other prominent leading ladies of the last two years at DC Comics (so much so that I’m frankly surprised she hasn’t headlined her own series as well), but here we get that gal pal that everyone wants when combined with Harley, without losing any of the elegance of the character as we’ve come to reknow her.

Hardin’s pencils on this issue are twice as good as last month’s excellent inaugural performance, and so we get a lead character who is sexy without being overly sexualized, and adorable without seeming infantile. The action throughout is very well paced, and Harley and Ivy’s facial expressions help to sell the quieter moments, accentuating everything brilliant about the writing. Also, the dogs and cats throughout this issue — not an insignificant part of the story — are so well drawn, and I know small animals are not the easiest thing in the world to draw. They’re all so adorable, although none so much as on Amanda Conner’s cover art for the issue. Front to back, this issue is a visual delight, with energy overflowing amid its illustrative perfection.

Madcap without bordering on the ludicrous, laugh out loud hilarious while still maintaining Harley’s dignity and smarts, Harley Quinn #2 is easily one of the best single issues in many months from DC Comics, and I can’t recommend it highly enough for anyone looking for that fun ride we hear is so hard to find these days. It’s right here waiting for you. Climb aboard.