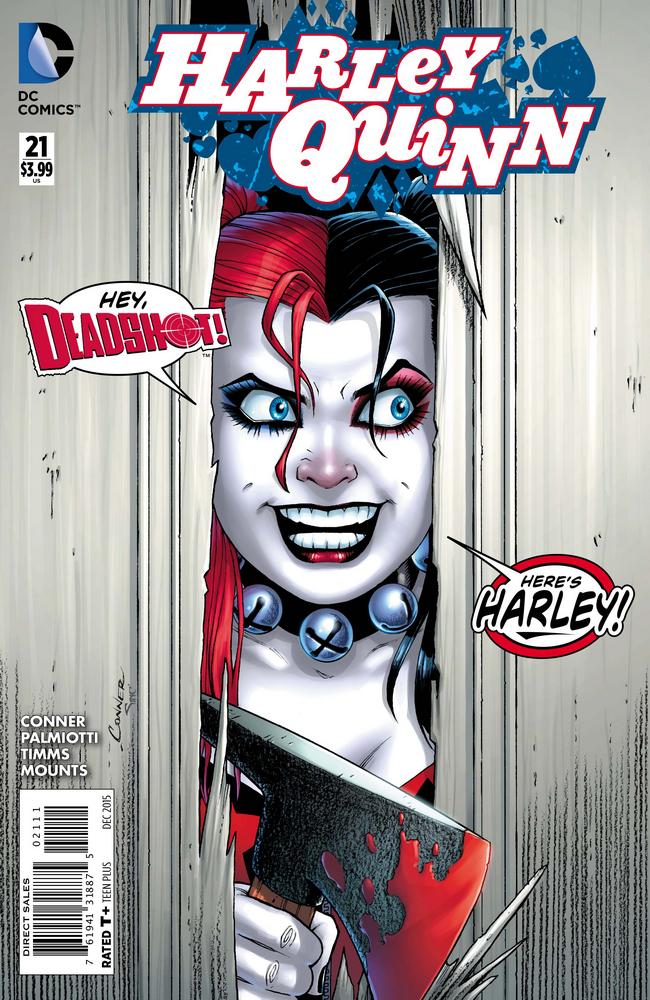 So here it is, finally, the long awaited twenty-first issue of Harley Quinn. This arc has been in my opinion the strongest one yet from the dynamic duo of Amanda Connor and Jimmy Palmiotti. What a ride!

In the last issue, we were surprised to find that the bounty hunter/assassin that Harley had managed to piss off and was not hot on her trail, was none other than Floyd Lawton. You may know him better as his handle, Deadshot. The story begins with an epic Harley vs. Floyd scene which spans several pages, making this one of the most action packed Harley Quinn stories I’ve seen during this run. The heart-of-gold Harley that we’ve been seeing spanning the past several issues is a little darker this time, seeing the lines across her morals blurring even more than usual. The Robin Hood-esque nature of her character, the “steal from the rich to give to the poor” mentality is still very much in effect, but our favorite crazy clown girl is bordering a little bit more on the villainous side lately in terms of how far she will go. This does not mean to suggest however, that her heart is not still in the right place, or that we are running low on the silliness and good time fun we normally receive from this title. Trust me, it delivers with a bang!

The artwork is on point as always, a flurry of red and black and enough visual stimulation to keep your ADD occupied for hours (I know mine was.) The setting changes from New York to Hollywood, allowing us the pleasure to see how little patience Harley has for the inauthentic beauty of LA culture.

Unfortunately her “gang of Harley’s” are not present in this issue, but hopefully we will see more of them coming up. I am a big fan of this book and how easy it is for Jimmy and the gang to incorporate people (especially women) from countless cultures and races, giving them the depth they deserve.

Be sure to look out for a strategically placed “Suicide Squad” reference (the upcoming movie, not the comic) which is well suited considering the Deadshot appearance. All in all, I cannot rave about this enough, enjoy everyone!