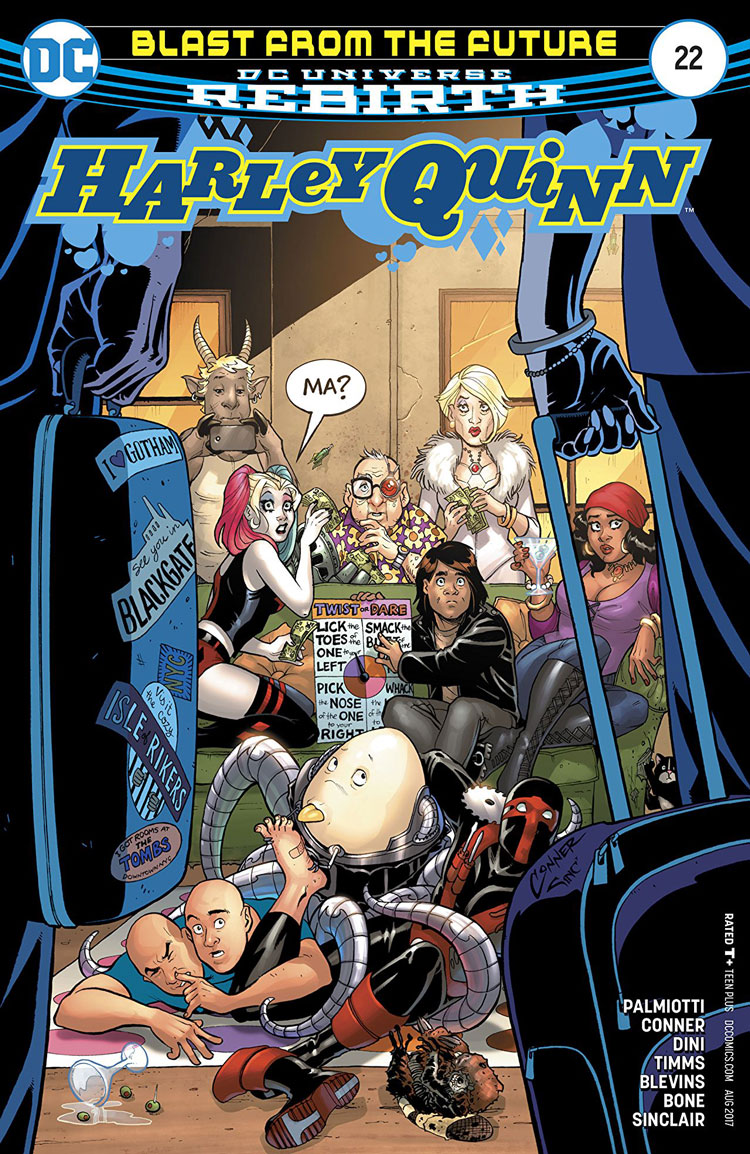 Harley Quinn #22 is somewhat of the lighter variety of an Harley Quinn comic, but it serves it’s purpose well in the build up. After issue #21 and all of the intense bombs that have been dropped lately, it’s a nice breath of fresh air. Besides, we all know that what comes next is going to leave us with our jaws on the floor. The suspense is such blissful pain.

With the ‘rents finally in town, Harley is left juggling her circus of a private life as Harley Quinn with the respected Dr. Harleen Quinzel and the cast of characters that fall under both categories. How much do Harley’s parents really know about our lovably loony heroine? We are tempted with subtle tidbits, and so far left to connect the dots ourselves.

Just as a minor character was given a shocking amount of backstory (while still leaving us begging for more) in the last issue, our leading lady lets us in on some of her own fascinating past in today’s release. I get the feeling that before this story arch is through, we will be graced by even more of the mysterious history of Ms. Quinzel.

As usual, the cast of characters is a truly refreshing parade of what “all walks of life” actually looks like. Old characters, young characters, women, people of color, goat… people. You know, all the usual types you see walking down the street every day. The incredible team behind this book continues to do an excellent job providing solidarity on all points of the spectrum. No matter who you are, you will most likely find representation in the Harley Quinn title.

The art is just as strong as ever, the cover by Amanda Connor and Alex Sinclair is not only beautifully drawn — but hilarious. Some of the greatest things about this book (and this issue in particular) are the crafty and clever signs, posters, stickers and/or graffiti that can be seen in the background of many a panel. If you pay attention to these, you will never be disappointed.

The humor that has always been such a staple to Harley’s story really gets a spotlight on it in these muted but brilliant moments. Use of color is as always anything but shy with the boldest and most expressive representation. The talent of this team of artists gets plenty of time to shine in their individual ways while simultaneously, flawlessly representing a very colorful and multifaceted cast of characters as though they were one well oiled machine.

With the recent addition of the one and only Paul Dini to team Harley Quinn, (along with Bret Blevins on pencils and J. Bone inking) on we are blessed with a second story at the end of each issue with “Harley loves Joker,” a throwback to the original nineties version of our favorite clown girl and her beloved Puddin. Grown up kids of the era will feel nothing but nostalgia, practically tasting the otter pops as they flip through pages of this rare gift of a story.

Good luck not hearing everything in Arleen Sorkin and Mark Hamill’s voices if you grew up watching “Batman the Animated Series.” Recent fans of Harley will be equally delighted to experience the old school representation of the beloved character for the first time, as all of its classic charm still holds up (with some updated twists!) and allows a window into the much-hyped relationship between Harley and “Mistah J.” Thank you, team Harley on behalf of the fans for this incredible bonus.