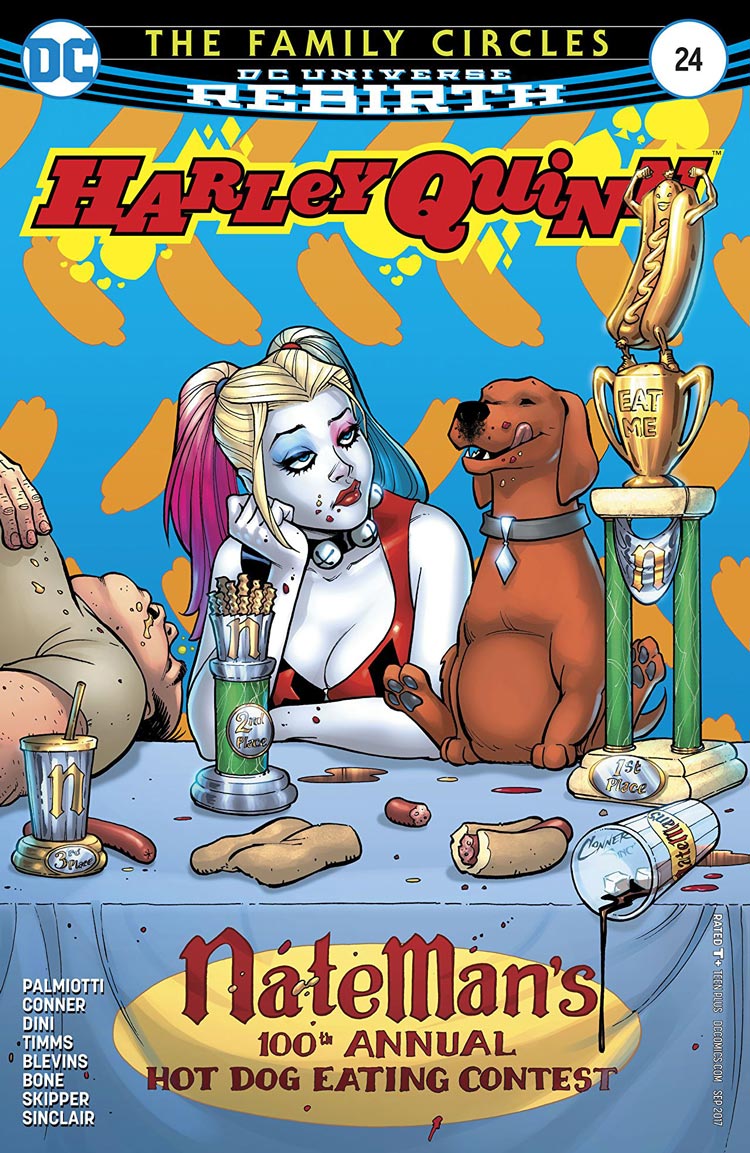 I’ve been reading Harley Quinn for a while. I know by now that when things seem to be calming down, it’s about to get completely and totally insane.

After a few issues that have given us a much appreciated breather, it’s time for the explosion. This title has many, many irons in the fire and in issue #24, we get an extended view into what they’ve got stewing for us at team HQ. Rarely are we awarded such an in-depth look into just how many plots and subplots they have have in the works. And with every page, it’s hard to believe we have been granted such a gift.

Did you think with Harley’s parents in town things were going to be vanilla? Well, think again. This story arc has taken quite the unexpected turn when it comes to our favorite Harlequin and her mysterious background. Perhaps there is more to the Quinzels than we initially gave them credit for.

One of the greatest thing about the Harley Quinn title is just how much “airtime” each character gets. Favorites that have taken a back seat in previous issues are allowed to shine when their time comes, and come it always will.

Comedy plays second banana this time around as we focus more on the feelings and simmering underbelly of the story arch we are now closing in on. For a book that always leaves us in stitches, it certainly always leaves us wanting more of the addictive drama as well.

Is it possible that the art is getting… better? It’s hard to imagine that it could possibly improve from the practical perfection that it’s been for a long time now, but unless eyes deceive me that is exactly what is happening here. Pencils and colors go flawlessly hand in hand here thanks to the genius designs of the HQ art team, adding an ethereal and colorful beauty to the comedic relief of the comic world.

“Harley Loves Joker” continues to be the bonus add on that Gotham deserves AND needs right now. It’s difficult not to wish that it would last forever, as this nostalgic blast from the past is such a breathe of fresh air, despite its vintage status.

It’s simple, but brilliant. It’s easy, yet the depth is obvious. It’s fresh, and yet it’s true to it’s classic roots as well. The next issue cannot come soon enough.